La Camioneta: The Journey of One American School Bus

Directed by first-time filmmaker Mark Kendall, the documentary  "La Camioneta" charts the journey of a decommissioned school bus from America to Guatemala, where it is refurbished and returned for use as a public transport vehicle. The story begins in Pennsylvania as the vehicle is purchased at auction and a driver makes the arduous 15-day journey down south to bring it to its new home before going back to the U.S. and doing it all over again. From there, the bus ends up in a junkyard where a team of locals go about repairing and restoring it with whatever materials they have on hand. Finally, it is turned over to its new owner, a former farmer for whom running a local bus route is a step up, although one that does include its share of dangers as well.

What makes "La Camioneta" so interesting is not so much the story that it tells as it is the way that Kendall has chosen to tell it. The point of the film, of course, is to show how  what is considered to be detritus in places like the United States can be important and sometimes life-changing assets to people in underdeveloped countries with just a little bit of effort. However, instead of hammering home that message with such staples of the documentary form as wall-to-wall narration, talking-head interviews and an overwhelming soundtrack, Kendall is content to take as much of a back seat as possible and simply record the proceedings with a minimum of cinematic interference.

This is a somewhat risky approach but it works quite well here because Kendall correctly realizes that a film of this type is more effective is viewers feel as if they are discovering things for themselves instead of having all the points underlined for them. Kendall also proved to be lucky in the particular journey that he chose to pursue because it yields encounters with an intriguing group of characters whose own stories turn out to be surprisingly engrossing as well. The film is also quite strong from a visual perspective as well—even though it sounds like little more than an elaborate home movie that was shot for very little money, Kendall, working as his own cinematographer, gives the proceedings a striking look that compellingly captures both the astonishing beauty and grim poverty of the land.

For some viewers, "La Camioneta" may sound like a tough sell. Even those who do attend documentaries and independent films on a regular basis may shy away from it on the basis that it lacks the kind of big dramatic hook usually required to lure viewers in. That would be a shame, because this is a smart and engaging work that takes a subject that sounds like a drag and, much like the workers that it covers, transforms it into something useful and valuable. 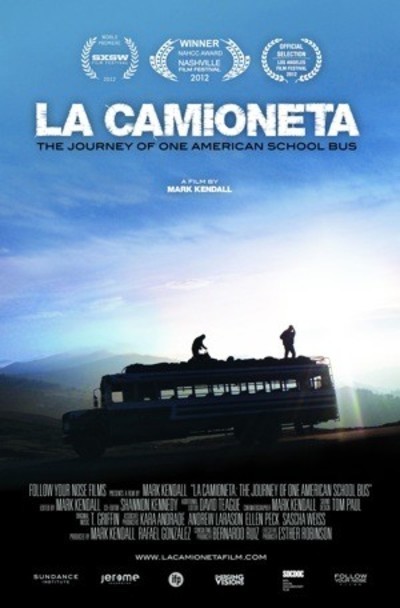 La Camioneta: The Journey of One American School Bus (2013)