Adapted from the popular YouTube series that dates back to 2010, “Ktown Cowboys” follows a quintet of Korean-American men as they ride through raucous Los Angeles day and night, offering a first-person perspective into different facets of Koreatown life by using filmmaking tricks à la “The Big Short” (quick cuts and fourth-wall breaks). Executive produced by (and featuring a cameo from) Ken Jeong, the project proves to have limits to its comedic imagination, offering some refreshing sweetness most of all in its portrayal of extremely macho friendship.

With established characters to work from, the hard-partying men of “Ktown Cowboys” are more than one-dimensional archetypes, even if their life dramas feel headed towards cliché. For example, lead focus and rich kid Jason (Shane Yoon) is dealing with legal troubles at work, while having a life passion to open a club. Experiencing similar stress is Robby (Bobby Choy), who was adopted by white parents (played by Eric Roberts and Rhonda Alrdich) and is wrestling with the idea of leaving behind his job to learn more about his heritage in Korea. Meanwhile, Peter (Peter Jae) brings some comic relief as a lovable lug and fashion designer, while co-writer Danny Cho gets the smallest arc, appearing in a couple of funny stand-up moments as hustling comedian Danny. The most emotionally successful story might belong to Sunny (Sunn Wee), who has to with take care of his father who suffers from Alzheimer’s, while inheriting the family liquor store.

With impressively concise storytelling from debut director Daniel Park, we know more than just their jobs and ambitions, and become connected to these characters as their mini-arcs are tied together. Park coats the big heart he has for these people with warm LA lens flares, and finds energy from sharp cuts and wall-to-wall music. It’s the performances that prove to be spotty, with flat line-readings all around and displays of emotions that struggle to reach from the script to the audience.

With its YouTube series origins in mind, “Ktown Cowboys” falls in line with two other shows about young men of urban nightlife, its flaws revealed by certain similarities. Like Aziz Ansari’s Netflix series “Master of None,” Park’s film offers a personal experience of being at tough junctures of maturity, while dealing with parts of heritage (without characters being defined strictly by ethnicity). But while Ansari’s show manages to find revelations in common experience, “Ktown Cowboys” often lacks an original voice or the wit for which it’s aiming, especially regarding musings on friendship and identity.

The lack of comedic imagination (especially when restricted by a small budget) in “Ktown Cowboys” often leads to stale situations about sexual extremes, genitalia or even gay panic. In contrast, the funniest moments come from downplayed jabs they lob at each other, like when Danny tells an overly anxious Peter about Sunny, “Dude, he’s going to Korea, not war, dumbass.” It’s a throwaway line that speaks to the honesty within the crew’s chemistry, topping that weary “Entourage” influence with characters who are immediately more likable.

From the show's pilot, “Ktown Cowboys” has been designed to focus on, and be inclusive about, the different terms within Ktown life; it’s a shame that zippy presentations of concepts like “booking” (it's like speed-dating) or even “FOB” (“fresh off the boat”) use the film's male-focus to limit gestures of diversity. Aside from lacking any non-nagging Korean-American woman of the same age, “Ktown Cowboys” makes us aware of antiquated enterprises like “dohmis,” women who are paid to hang out and flirt during karaoke sessions, but as Danny insists while breaking the fourth wall, are not prostitutes. “They’re like modern-day geishas,” he reasons. “And usually, no sex is involved … unless you got game.” “Ktown Cowboys” disappointingly doesn’t challenge or question these notions, exposing a condescending conservative side in order to cater a hit-and-miss guy’s night out. 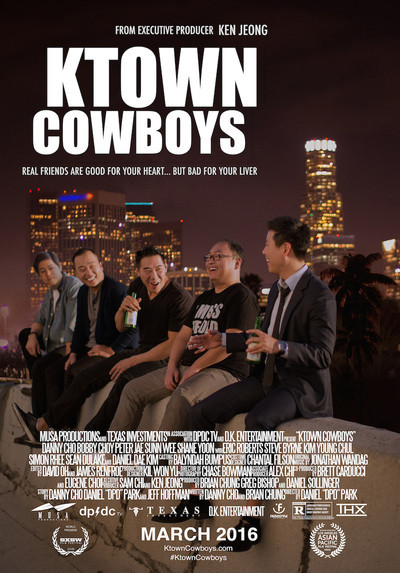