“King Richard” is half sports movie, half biopic. As such, it hits the sweet spots and sour notes of both genres. Depending on your perspective, this is either an invitation or a warning. Fans of the preternaturally talented tennis superstars Venus and Serena Williams will flock to this origin story when it makes its simultaneous debut in theaters and on HBO Max. But the film’s title, and the Williams’ executive producer credits, should clue you in on exactly how complicated the characterization of its subject will be, and just how far the needle will be sent up the likability gauge. It seems that only directors Bob Fosse and Richard Pryor were willing to risk making their semi-autobiographical, cinematic alter egos potentially irredeemable at the expense of viewers’ comfort. Richard Williams does some infuriating things here, but the movie never once indicates he was ever wrong. This sands the edges off a film that occasionally comes at you from unexpectedly askew angles.

When Mario van Peebles decided to play his father, Melvin, in “Baadasssss,” the elder van Peebles told him “don’t make me too nice.” Will Smith adheres to this philosophy, though “King Richard” keeps pulling him back from the brink. The day before my screening, I saw Smith live on his book tour at the Kings Theater in Brooklyn. He read from his book, performed songs and chatted with Spike Lee. Smith talked about how he uses humor as a defense mechanism, an action to hide his fears. His words came back to me as I watched his performance; Richard Williams is always on, tossing off asides and comments that are often hilarious and mean enough for a Madea movie. He is larger than life, and we need a larger-than-life personality to play him, someone who can successfully overpower your defenses with charm.

Though Smith’s characterization is oversized, his best moments occur when he’s cornered into dropping his façade. He’s playing a man who refuses to acknowledge anything besides his own opinion, yet he is hauntingly effective when forced into silence. Despite two Oscar nominations, Smith is rarely given credit for his dramatic acting chops. The scenes where he shows Williams’ vulnerability have a wounded quality that lingers long after the moment has passed. Whether surveying his wounds after his umpteenth violent run-in with neighborhood riff-raff (“Daddy got beat up again!” one of his kids announces), or realizing there’s no way he can help his daughter get out of her own head on the court, Smith excels at showing the wounded man under all the bravado. It’s the screenplay by Zach Baylin that keeps threatening to undermine his performance. There’s a dramatic skittishness here that can’t be ignored. The actor is willing to be truly unlikable in appropriate moments, but the film keeps making him unimpeachable.

If you know this story, you know that Richard Williams, Compton resident and big idea man, drafted a “plan” for his daughters Venus and Serena before they were born. The plan indicated that the duo would become enormous tennis superstars. There will be no deviations, so Williams puts the elder Venus (Saniyya Sidney) and her younger sibling/best friend Serena (Demi Singleton) through their practices even when it’s pouring rain outside. “I got two Michael Jordans,” he says, and it’s fun to watch him rub a former detractor’s face in Venus’ success once she starts winning. You’d probably agree with these early naysayers if a man presented you with a brochure for his kids’ future and demanded you accepted it without question. But this movie is guilty of that same sin. We don’t even hear what the entire plan is, and if you didn’t know any better, you’d think Venus and Serena were the first two Black women to play the game. No mention of the legacy of Althea Gibson can be found. I wondered if her career had any bearing on Richard’s decision to consider tennis.

Since Richard can’t reproduce by osmosis, “King Richard” reminds us the Williams sisters had a mother, Brandy, played by the always welcome Aunjanue Ellis. Ellis is somewhat trapped in the “supportive spouse who puts up with a bunch of crap yet has her own dreams” role, but she has two knockout scenes that reinforce why she’s one of my favorite currently working actors. The larger, and more impressive of the two, occurs when she finally has had enough of her husband’s self-martyrdom. Brandy reads her husband for filth, and the electricity between the fiery Ellis and the backpedaling yet still prideful Smith makes for one of the year’s best scenes. It’s a smaller version of Viola Davis’ masterful scene opposite Denzel Washington in “Fences”—Brandy and Rose are saying the same thing, combatting and besting the same type of foe—but it’s equally memorable.

Director Reinaldo Marcus Green is much better at directing the dramatic scenes than he is at the tennis sequences. They have a flat, repetitive quality that doesn’t reflect just how exciting they were in real life. Since this has to end, as all sports movies do, with the big game, this could have been a major deficit. But “King Richard” is smart enough to know its strength is in its acting, so it wisely cuts between the play action and Richard and Brandy’s reactions and monologues. Green is also far better at conveying the intensity of the threats in Compton (a scene of shocking violence is superbly handled by the director and Smith) than he is at depicting the inherent racism prevalent at the lily-White clubs where Venus and Serena compete. They seem too gentle and jokey, though Jon Bernthal gives a good, frustration-filled turn as coach Rick Macci.

Much will be made of Smith’s performance, which is excellent, and I’m hoping Ellis gets all the praise she deserves. But Sidney and Singleton should also be commended for their excellent work as Venus and Serena. Both have difficult roles to play, that of the rising star and the budding one temporarily trapped in her shadow, respectively. Plus, unlike Will Smith, they have to mimic two of the greatest athletes to ever play any sport. They should be kept in the conversation, because it’s the acting across the board that ultimately saves “King Richard.” It earns the extra half-star that makes this a “thumbs up” review. At 140 minutes, the film is about half an hour too long, but everyone onscreen made the extra time far more tolerable than it could have been.

"King Richard" will be available in theaters and on HBO Max on November 19th. 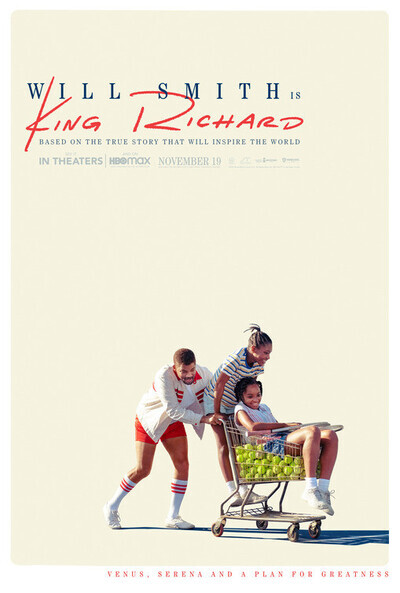 Will Smith as Richard Williams