I'm honestly not sure what sort of vibe the makers of "Killers Anonymous" were going for with their high-concept locked room thriller about a group therapy session for snarky high-paid assassins. The movie's fussy camera blocking, self-conscious dialogue, and remote-stuck-on-fast-forward pace all suggest that director Martin Owen (the promising virtual-reality horror film "Let's Be Evil") and co-writers Seth Johnson and Elizabeth Morris were trying to mine the same collapsed vein of hip, post-modern gangster films that Quentin Tarantino and Guy Ritchie famously opened up in the 1990s.

But it's 2019 now and "Killers Anonymous" just doesn't make sense as a throwback to MTV-friendly sensibilities. It's also not inventive, funny, or energetic enough to warrant its creators' vague ideas about deceiving looks, moral relativism, and, uh, girl power? I couldn't even coast on this movie's slick surface given how thin its plot and characterizations are. "Killers Anonymous" is a lot of things, but not enough of any to leave a lasting impression.

Our story begins in a London pub: a fatherly, but short-tempered hitman credited as "The Man" (Gary Oldman) tries to placate a frantic, but chatty hitwoman named Jade (Jessica Alba). She explains to him how she got a split lip (she came on to the wrong man's woman). Then, one scene later, Jades gets seduced and murdered in a strip club. These establishing scenes feature a lot of flashy camerawork that serves no obvious or essential purpose, other than to call attention to itself.

Then we join shy, babe-in-the-woods hit-lady Alice (Rhyon Nicole Brown) as she attends her first meeting of Killers Anonymous, a therapeutic outreach organization for hit-people like her and The Man, the latter of whom organizes such events. Nobody knows who called this particular meeting to order though, and that puts off tetchy members like paranoid Markus (Tommy Flanagan) and (ostensibly) smooth-talking Leandro (Michael Socha), especially since somebody’s just issued a big bounty for the termination of whoever killed Kyle (Sam Hazeldine), a high-profile US senator. Now everybody’s a suspect, including Alice and even mild-mannered group leader Joanna (MyAnna Buring).

Everybody’s also keeping secrets from each other, though none of their personal revelations are especially memorable. Some characters give monologues about the first people that they killed, but these speeches only accentuate how dull most serial killer and/or whodunit clichés are. He buried his brother! And he feels unloved! This one’s got trust issues! And that one’s a traitor!

None of these tic-y traits make Owen and his co-writers’ characters especially funny, pathetic, or compelling. The film’s uniformly dull performances and posturing dialogue also don’t help much. Leandro can tell when rain’s coming (“I can feel it”); he also rolls his eyes when he’s told it’s “not a good night to be a bad guy.” He and Alice share a couple of cigarettes, and try to bond, but Brown and Socha aren’t able to make sparks fly. And unfortunately for viewers, Leandro and Alice’s interactions are just as dull as the next twist, the next speech, the next confrontation, and on and on. By the time you get to the movie’s dull battle royale climax, you probably won’t be surprised to see computer-generated blood repeatedly splash onto the camera lens, as if to compensate for how lifeless the rest of the scene is.

I don’t mean to be unnecessarily cruel, but “Killers Anonymous” is a soupy mess of fetish-ready signifiers, like the bandana, split lip, leather jacket, and braids that Alba sports (in close-ups!) during the movie’s opening scene. Owen and his co-writers never reveal enough about their characters’ interests and attendant identities to foster a meaningful connection between us and them. If you squint, you might find some latent social commentary about how the movie’s female protagonists are generally more competent and therefore worthy of survival than their male counterparts. But that concept isn’t developed beyond a very finite point.

“Killers Anonymous” is a bit like a Magic Eye painting: the more you scrutinize it, the less coherent it is. I kept waiting for some cast member (any cast member) to do something memorable, especially Oldman, who is by far the most seasoned actor among them. But all he gets to do is re-assure the other killers in a vaguely menacing purr. There’s not much more to The Man once you get past Oldman’s heavily put-on London accent—an unconvincing sort of Estuary lilt that also periodically descends into a working-class Cockney base—and start listening to what he’s saying. The best thing that can be said about Oldman’s performance is that he’s not too boring. The rest of “Killers Anonymous” isn’t nearly as smooth; the more attention it demands from viewers, the less it deserves. 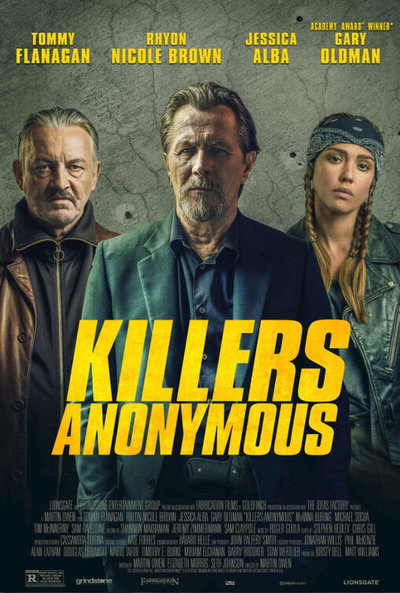 Rated R for bloody violence, and pervasive language including some sexual references.

Gary Oldman as The Man