Adepts of tech Newspeak will immediately recognize the title of this movie as an unsubtle play on Google’s in-house corporate ethos slogan, “Don’t Be Evil.” Not the cleverest usurpation of a concept, and the movie, directed and written by Martin Owen from “an original idea” (so original it gets its own opening credit card) by executive producer Jonathan Willis, steadily maintains that lack throughout. Not a great thing if your aim is to make a satirically pointed sci-fi horror movie.

At least that’s what I think this thing was supposed to be. After a badly staged simulation of an issue-driven chat show, in which an agitated male predicts a generation of uneducated obese kids, the movie cuts to a scene out of one of those debt-consolidation television commercials. A stack of envelopes with “Past Due” stamped in red sits atop the blond faux wood grain of a generic kitchen table. An ailing older woman is seen through an open bedroom door, and a young woman outside that door takes a phone call, while her computer screen silently shows the music video for Kim Wilde’s “Kids in America.” 1994, what a year that was. Why this Millennial, named Jenny, has much interest in it is a question that will, sort of, be addressed. Non-cleverly. The phone call is for a job prospect—ah, overdue-bill problem perhaps solved!—at something called the Posterity Project. Jenny (Elizabeth Morris, one of the film’s co-writers) eagerly makes the appointment, only to meet with obfuscation once inside the designated building. The “there’s no Posterity Project” here bit is the first of several something-is-happening-but-she-don’t-know-what-it-is jabs to which the movie never ends up delivering meaningful follow-ups.

Eventually Jenny gets situated, and meets her coworkers, or rather co-candidates—the appointment is for a job audition, and the job is “chaperoning” a group of academically gifted students enrolled in the Project’s Augmented Reality education program. This being the, or an, ostensible solution to the fat-kid problem the fellow in the opening scene was ranting about. All the participants in the program wear virtual reality glasses, and much of the film is shot via the point of view of the characters wearing the gizmos, which allows the frame to be filled with semi-fancy computer graphics and also means the cinematographer doesn’t have to make a lot of different lens choices. Jenny’s colleagues are Tiggs (Kara Tointon)—who prefers the diminutive to her given name, which is Antigone, and hold on, it gets worse—a perky/feisty young woman, and Darby (Eliot James Langridge), a guy with one of those au courant post-Nazi shaved-side haircuts who’s so surly and anti social it’s hard to believe he’d get past an interview for a gig mopping up at White Castle, but whatever. This trio’s challenge is to look after a group of busy-interacting-with-air (because augmented reality and everything) young geniuses, including one named Cassandra (Isabelle Allen). (I told you it gets worse.) Shepherding the recruits is Ariel (Jamie Bernadette), who’s kind of like Siri with a visual component.

All the ingredients are here, I guess, for an involving and tricky thriller in which actual reality opposes itself to computer-driven reality, not to mention all the potential for social commentary such a scenario engenders. David Cronenberg springs to mind, as do the post-nuke “special” children bred and trained in Joseph Losey’s early ‘60s “The Damned.” “Let’s Be Evil” does not get within swinging, spitting, or any kind of distance of those aforementioned films. There’s no reliable conceptual framework, no actual opposition between villain and protagonist, not much of anything but the computer graphics, the flickering lights and eventual blackouts and crawl-through-the-ventilation scares that worked a lot better in the likes of “Demons 2” than they do here. The movie’s relentless one-note tone makes its final twist, such as it is, entirely predictable and pat. I was surprised to see that this picture had an unrolling at this year’s Slamdance Film Festival, where once upon a time pictures such as Christopher Nolan’s “Following” and Jonathan Weiss’ “The Atrocity Exhibition” unspooled. Standards are sinking everywhere these days, it seems. 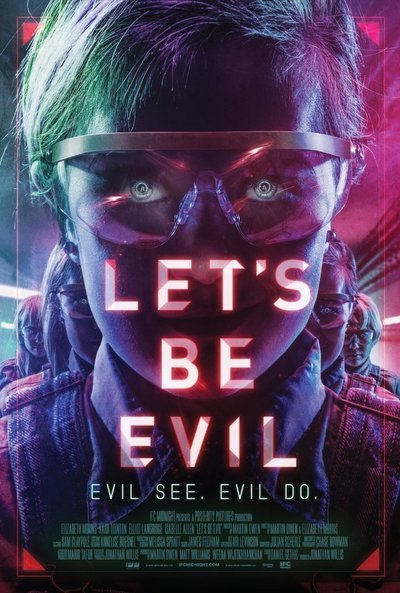 Elizabeth A. Morris as Jenny