Don't let the tacky American-friendly title of "Kill Zone 2" fool you: the martial arts genre's next big thing is here, and it is way meaner, more technically accomplished, and more exciting than its disappointing marketing strategy implies. Film festival audiences devoured "Kill Zone 2," originally titled "Sha Po Lang 2: A Time for Consequences," and not because of its association with the earlier "Sha Po Lang" martial arts action-thriller. On the contrary, you don't have to know anything about "Kill Zone"/"Sha Po Lang" prior to seeing "Kill Zone 2": there's only one major recurring character in both films, and he's a supporting character in both films. "Kill Zone 2" is an odd sequel in that sense. It doesn't even star, but rather features Thai martial artist Tony Jaa, arguably the best contemporary action movie idol. Jaa's just a supporting player in a busy ensemble drama featuring organ-harvesting gangsters, a corrupt prison warden, and suit-and-knife-wielding heavies. Thankfully, while Jaa takes 80 minutes before joining Chinese star Jing Wu in fighting an evil organ-smuggling human trafficker, the film never feels as long as its two-hour runtime. "Kill Zone 2" may be a lot of things, but it's always thrilling.

Failure and corruption are the glue that holds "Kill Zone 2" together, a palatably cynical movie with a saccharine silver lining. Chi-Kit Chan (Wu), an undercover cop tries and fails to bust Mr. Hung (Louis Koo), an ailing gangster with a bum ticker who tries and fails to abduct and (literally) steal the heart of his estranged brother Man-biu (Jun Kung). Chi-Kit is the film's star, but he's aided in his quest to protect Man-biu and shut Hung down by uncle Kwok-wah (Simon Yam) and Thai prison guard Chatchai (Jaa). All of these men are dirty in some way, even the heroes: Chi-Kit snorts cocaine, Kwok-wah gives bribes, and Jaa takes hush money. These crimes pave the way for the film's bleak, but never depressing outlook: people are susceptible to corruption, but they can change if they choose.

Cheang's steady hand keeps the film's exposition-heavy first half moving whenever it threatens to stall due to its top-heavy plot. There's a meandering sub-plot that connects Chi-Kit, who is imprisoned by Hung's men, and Chatchai, a crooked guard with a sick daughter. That sub-plot may seem superfluous but it's central to the film's message: everybody is connected, but not in the Pollyanna-ish way you might expect. "Sha Po Lang" takes its name from a Chinese astrological constellation that represents three elements sometimes translated as power, destruction, and lust or greed, destruction and conflict. Together, these three elements are combustive, as is evident by all the bus-related, pen-knife-centric, and candy-glass-shattering stunts that occur throughout "Kill Zone 2." Still, it's striking that what unites the principal characters isn't a will to reform, but rather a tendency towards betrayal, self-deception and violence. This isn't the martial arts equivalent of "Pay It Forward" but rather a grim beat-'em-up that combines muay thai boxing's characteristically concussive knee and elbow blows, and traditional Chinese martial arts' emphasis on graceful, dance-like choreography.

Still, you may be wondering if we need to spend so much time with Chatchai's sick daughter, especially in a film called "Kill Zone 2." You could easily ask the same question about the unusually well-developed sub-plot concerning Hung and his brother. But none of these narrative tangents really distract from the film's main narrative, since so much of the film's main thrust is discursive. In the wrong hands, "discursive" would be a polite way of saying "messy." But Cheang, a student/former collaborator of master action filmmaker Johnnie To, holds everything together admirably. His love of rhythmically-paced, wide-angle-lensed sequences shows just how much he's learned while working at To's Milkyway production company on recent hard-boiled collaborations like "Motorway" and "Accident." "Kill Zone 2" may be as cynical as early Cheang action films, like "Shamo" and "Dog Bite Dog," but it has the control and eye for detail of his superior recent work.

Better still: Jing, Jaa, Yam, and Koo all bring an abundance of charisma and grace to already impressive action scenes. Action director Chung Chi Li ("Ip Man: The Final Fight") makes his cast look like stars as they bash, smash, and leap through various obstacles. Viewers may come to "Kill Zone 2" because they had hoped for something like "Ong-bak," Jaa's 2003 breakout star vehicle. But Jaa plays a good second fiddle here, and the film consequently feels like a real team effort. Jing looks especially good here in a performance that will make you remember his name. If you like action films, you need to see "Kill Zone 2." 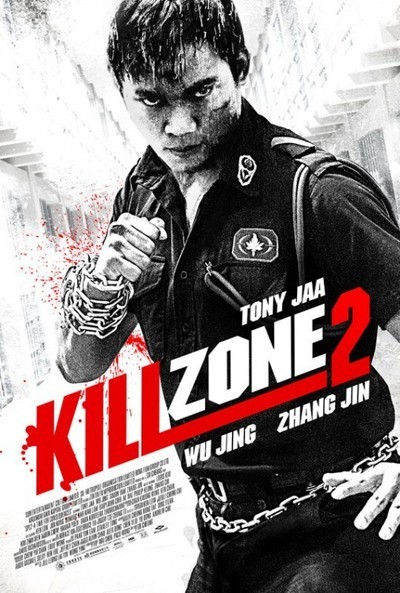