Like so many coming of age stories, "Khumba," a blander-than-bad animated movie about a half-striped pre-teen zebra, is ostensibly a pre-emptive life lesson/fable. At one point, "Khumba" probably had noble goals: to re-assure tweens, and let them know they're never as alone as they think. But those loftier aspirations are mostly irrelevant since "Khumba" is essentially cut-and-paste cinema. The film's creators borrow a lot from the "Madagascar" and "Ice Age" films, and while that doesn't sound that bad, "Khumba" is disastrously uninspired. Not even a galaxy of stars, united in their willingness to take a check, can save "Khumba" from being the boringest plucky outsider of all.

"Khumba" is so formulaic that it makes you wonder why its stock plot is so enduring. Khumba (Jake T. Austin) doesn't look like other zebras, so he feels like a freak. He naively misunderstands his ailing mother Nora's (Catherine Tate) story about a "Magic Waterhole," and goes off in search of the mystical wellspring that will make him all-zebra. While Khumba's wise zebra father Seko (Laurence Fishburne) and his fawning zebra girlfriend Tombi (AnnaSophia Robb) chase after him, Khumba makes new friends and enemies. There's Phango (Liam Neeson), the blind leopard who uses his Daredevil-like radar senses to track Khumba. There's Skalk (Steve Buscemi), the jittery, self-interested wild dog who will do anything to save his own skin. And who couldn't forget Mama V (Loretta Devine), the sassy but nurturing buffalo, or Bradley (Richard E. Grant), the neurotic British ostrich?

As they're expressed, the formula-enforced expectations required of "Khumba"'s story are pretty depressing. So not only is it impossible for a pre-adolescent kid to not have a romantic interest, but apparently, he has to be so literal-minded that he doesn't understand that something called "the Magic Waterhole" isn't real. Okay, okay, that's not that bad. But what about the little campfire song-and-dance Bradley does to explain that he's been "ostracized," or the depressing revelation that the character that sounds like a bad Richard E. Grant impersonator is actually Richard E. Grant? Or the latently racist wise-black-woman schtick that Devine is stuck with? Or Nora's cliched tuberulosis-like illness? Or Laurence Fishburne's insubstantial role? Or the fact that Phango lives in "the Valley of Desolation?" Or the rote last-minute revelation that Phango and Khumba are "destined" to fight each other?

The above list of grievances seems made of minor irritations, but together, they outline the gaping hole where the film's charms should be. It'd be one thing if "Khumba"'s creators were too eager-to-please, but nobody here seems to care. Animated movies by Studio Ghibli and Pixar are as refreshing as they are because they don't just give their audiences what they think they want. "Monsters University," for example, doesn't pile on frat-pack comedy tropes just to flatter viewers; instead, it shows viewers that talent and discipline alone will not necessarily see you through. During its impossibly never-ending 81-minute runtime, "Khumba" limps towards a conclusion that was previously established by a myriad Disney films, several Dreamworks cartoons, and many other lesser animated films no one remembers. Your kids might enjoy "Khumba," but there's nothing in it they need to see. 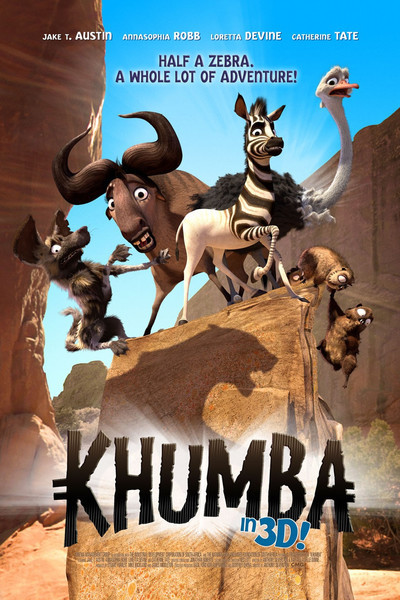