"They reach for their moment
And try to make an honest stand
But they wind up wounded
Not even dead
Tonight in Jungleland."

"They wind up wounded, not even dead" evokes the mood of Max Winkler's "Jungleland," starring Charlie Hunnan and Jack O'Connell as brothers so far outside mainstream society they are off the grid altogether. Like the invisible, the aimless, the unmoored, they are the walking wounded. With a script by Theodore Bressman, David Branson Smith, and Winkler, and featuring three very strong central performances and eye-catching poetic visuals, "Jungleland" is more of a mood-piece than anything else, and on that level it works beautifully. The mood is strange, sad, and hypnotic.

Stanley (Hunnan) and Lion (O'Connell) have nowhere to go but up, although "up" in their situation is basically a pipe dream. How could it be anything else? Lion is a boxer, and Stan acts as his manager/promoter, but Stan—a sloppy mover and shaker—cut some dirty deal a while back which got Lion banned from traditional boxing. And so now Lion staggers through the bare-knuckle-boxing circuit, barely a circuit at all, just brutal fights in dark smoky rooms. When the film opens, the brothers are in Fall Fiver, Massachusetts, squatting in an abandoned house and working in a sewing factory, trying to save up enough to get to San Francisco for a boxing match with a $100,000 prize. Stan is in trouble with a local gangster named Pepper (Jonathan Majors), who proposes a plan to clear Stan's debt: On the brothers' way out to San Francisco, swing by Reno to drop off a young woman named Sky. ("It's a family matter," says Pepper.) One look at Sky (the remarkable Jessica Barden) and it's clear that "family matter" actually means "human trafficking."

Stan is desperate. He accepts Pepper's offer. Lion is disturbed. "How low can we go?" he hisses at Stan, a rare moment when he pushes back. The trio set off on the long drive to San Francisco. Sky is a mystery at first. She is very young, with a flat-affect blunt way of talking. She's been around. She sits in the back seat, knitting something pink and fluffy, not saying a word. She gets pissed when Stan asks her if she's a "pro." Sky is not at all what she seems. The film doesn't fetishize her. Lion feels protective of her and hates what they're doing. He knows they are delivering her into the hands of a bad man named Yates (John Cullum), and he doesn't want to participate in any of it. How bad would it be if they let Sky give them the slip? Give her a chance at life? He's gentlemanly with Sky, in a rough way. A slender bond grows between them, and Stan is almost jealous, irritated. Sky says to Lion, "You don't have to do everything your brother tells you to do."

To talk about the plot is to do "Jungleland" a disservice. It's a road movie, where the road is nothing but detours. The destination shifts, depending on the circumstance. Nothing goes as planned. Problems multiply: car trouble, money trouble, mounting arguments between the brothers. They spend a night in a very strange hotel in the middle of nowhere called the Venus de Milo. They "crash" in a high school, breaking the windows and climbing their way in. They wander the empty dark halls, exploring the gym, the cafeteria, the auditorium, all of it so remote from their lives they might as well be walking on the moon. Production designer Jeremy Reed does gorgeous detailed work: these places seem real, like they exist in a prosaic way during the daytime, but when Stan, Lion and Sky enter them the places shimmer like something from out of a dream. "Jungleland" prioritizes mood and character over plot, and it prioritizes atmosphere almost above all else. Winkler and cinematographer Damián García find the strange and surreal in every location.

Hunnam is wonderful here. He plays Stan as a guy who once had some shine to him, easy charisma, but that charisma isn't working so well anymore. At first it seems Lion is dependent on Stan, that Lion would be lost without Stan. Slowly, it becomes clear it's probably the other way around. That anxiety is always flickering deep in Hunnan's eyes, even at his most brash and loud. O'Connell is a quiet authentic presence, weighted down with pain, and it is touching to watch him loosen up as his bond with Sky deepens. Barden gives a fascinating performance: Sky lives in a dark and scary world, and she's being handed around like property, but she is so tough and wily she gives Stan and Lion a run for their money. She's got plans, just like they do.

The loose structure and minor-chord melancholy calls to mind films of the 1970s, films like "Scarecrow," "Five Easy Pieces," "The Last Detail," "Tracks," where lonely outsiders travel by bus, motorcycle, train, across the country, looking for something, or running from something, joining the exhausted tail-end of Jack Kerouac's transcendental vision of the possibility of the American road. Something has been lost "out there", if it ever existed at all.

Strangely, the nine-plus-minute song that gives the movie its title does not appear anywhere on the soundtrack (although "Dream, Baby, Dream" plays over the closing credits.) In his autobiography, Springsteen said of "Jungleland," the closing track on his 1975 album Born to Run: "At record's end, our lovers from 'Thunder Road' have had their early hard-won optimism severely tested by the streets of my noir city." Stan, Lion and Sky are similarly tested. They operate (barely) in Bruce's "Jungleland," among the "the hungry and the hunted", the "lonely-hearted lovers", the "kids like shadows." The film's detours may irritate people who want a clearer through-line, who want them to just "get on with it.” When the plot re-asserts itself, the film gets very very busy during its final stretch, and it’s a break with the meandering mood of the rest. It briefly becomes another kind of movie altogether. Consider the ending of “Five Easy Pieces,” with that truck pulling away from the truck-stop, and driving off as the credits rolled, leaving the audience with questions, mainly: “But what about the woman inside? What happened to her?” We’ll never know. But overall, “Jungleland” stays true to itself. Like the song says:

"...the poets down here
Don't write nothing at all.
They just stand back and let it all be."

"Jungleland" is in theaters today and on VOD on Tuesday, November 10th. 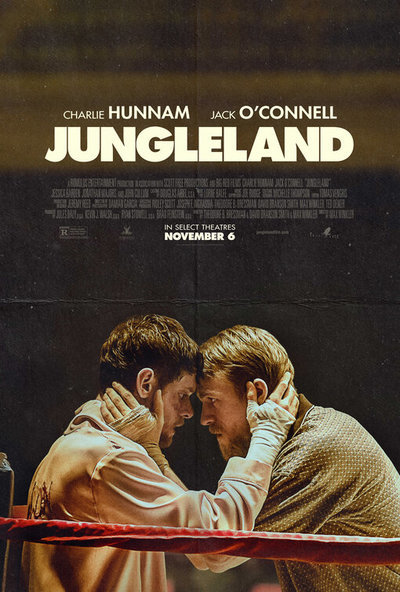