Have you ever walked out of a film so struck by awe and wonder your skin is abuzz? Has a film ever left you so joyful and drunk on adrenaline that it made you more hopeful about the world? Has a lead performance in an action film ever had such balletic grace it made you marvel at the possibilities of the human body itself? This is exactly how I felt watching “John Wick: Chapter Two,” the sequel to the surprising 2014 action hit.

“John Wick: Chapter Two” is a more audacious film, bolder and more violent than its predecessor. It’s also surprisingly hilarious, wringing humor from physical pratfalls and dry wit in unexpected moments. In many ways, it’s the platonic ideal of an action film: operatic yet colored with fine-tuned details, blisteringly visceral yet tinged with pathos. For all its great craft, the movie is ultimately a showcase for Keanu Reeves, who returns as the titular assassin, proving his greatness as an actor and action star. Yes, that’s right, I said greatness. No qualifiers necessary. “John Wick: Chapter Two” is truly wondrous, but it wouldn’t work without Reeves, who has a sincere love of this genre.

Wick is not good at retiring. It’s easy to believe, as commented on by others in the film, that he’s addicted to the vengeance he dishes out with such panache. After all, what else does he have to live for? The sequel picks up shortly after the end of the first film; Wick is still reeling from the death of his wife, Helen (Bridget Moynahan), failing to adjust to a new life even with his adorable, unnamed pitbull steadfastly by his side. (For those wondering, the dog remains safe.) He has little time to relax when he finds Santino D’Antonio (Riccardo Scamarcio) on his doorstep, asking him to make good on the blood oath he made years prior that allowed him to retire from his deadly profession. At first, Wick balks. One devastating house explosion later, he sees no other choice. But accepting Santino’s offer does not bring Wick the peace he desires so intensely. Soon, he finds himself facing threats from all sides, including Santino’s mute enforcer Ares (Ruby Rose) and Cassian (Common), a bodyguard of the woman Wick is forced to kill.

“John Wick: Chapter Two” is never as singularly focused as its stellar opening, which is pretty much the best Batman sequence that never was. Wick has already avenged his dog and now wants to recover the car stolen in the previous film. This gives us a fun Peter Stormare cameo as Abram Tarasov, the brother of the Russian gangster Wick killed the last time around. The opening juxtaposes Wick fluidly moving in and out of shadow killing all manner of men who stand in his path. All the while, Abram listens to the ricocheting bullets and belabored screams of his henchmen growing almost cartoonishly overwrought with dread. The scene works by leaning into Wick’s mythic nature even more heavily than the first film and establishes the sequel’s excellent comedic stylings.

After the opening, the film wastes no time plunging us deeper into the mythology of Wick’s labyrinthine world of assassins, blood oaths and arcane rules. The budding franchise has some of the best world-building currently in film, besting comic properties and reboots that have decades of material from which to draw. There are many delectable details introduced like an old-fashioned steno pool of tattooed darlings that handle the release of hits and other nasty work needing to be done. Some of the most fun moments are just watching Wick prepare. He’s a man of extremely refined taste, whether he’s getting a new suit tailored or conversing with The Sommelier (Peter Serafinowicz) about weaponry with the metaphors of fine dining. Cinema was created so Keanu Reeves could wear a fine black suit and slice through people with the same grace as Fred Astaire. But in expanding Wick’s world the film often lacks the sharp focus that made the original so entrancing. But even though it isn’t a perfect sequel, the imperfections are charming, lending the story the ability to venture down fun avenues.

“John Wick: Chapter Two” is a character actor’s paradise. It’s so obvious that returning cast members and new faces are having fun that you can’t help but smile: Ian McShane returns to make a meal out of every scene he’s in as Winston, the owner of New York City’s Continental hotel; Lance Reddick and John Leguizamo are also a pleasure, giving completely different energy to the film; Ruby Rose might just have a great career soon as an action star. With not a single line of dialogue, she has a commanding presence, proving me wrong about her skills demonstrated in a previous season of “Orange is the New Black.” Common proves to also be a great foil for Reeves, nailing the silent but deadly assassin mode with panache. Franco Nero’s brief appearance as the manager of the Continental hotel in Rome is especially great. Come on. It’s Franco Nero talking to John Wick. What else could you ask for?

But it’s Laurence Fishburne as the Bowery King that may just be my favorite addition to this fascinating world. “The Matrix” co-stars understandably have great rapport. They riff off each other in the way only actors with deeply shared history can. Fishburne’s presence is commanding, with a tinge of eccentricity. His booming laughter happens to be one of the most powerful aspects of the film’s impressive arsenal. At one point, his laugh acts as a transition between scenes going longer than expected in response to Wick’s questionable request. He only appears briefly but he makes quite an impact.

Of course, the reason to truly cherish “John Wick: Chapter Two” is the action. Director Chad Stahelski and cinematographer Dan Laustsen make every frame a sumptuous visual feast. They take advantage of the outsized world they’ve created, forming a color palette unique to the action film landscape that gives “John Wick: Chapter Two” a painterly quality. They also know how good-looking and physically expressive their leading man is. Often Reeves is the only thing on-screen, his face and body cast in shades of turquoise, jade, and neon pink.

There is an artistry and detail to even minor scenes of characters trading barbs that express the sheer mythic and grand nature of the story. The sound design highlighting the crunch of bones, splatter of blood, and the various repercussions of these increasingly intense battles is also quite artful. Fight scenes are never over-edited, opting for continuous wide shots, making it evident how much Reeves trained. The violence is never one-note, running the gamut from darkly humorous to oddly poetic. And it is always very, very bloody. This film is far more brutal than the first. Assassins are sliced at the groin, stabbed in the thigh, and shot in all manner of body parts with the camera never flinching, forcing us to bear witness. Bonus: we get to see Wick’s pencil trick. It’s even more gruesome than I imagined.

But the action isn’t just intense and gorgeously crafted. In “John Wick: Chapter Two” physicality is identity. Screenwriter Derek Kolstad smartly doesn’t over-explain the history between characters—the way they fight speaks for them. When Ares gets her showdown with Wick, she’s scrappy and unhinged, like a starved lioness released onto an unsuspecting public. Cassian is more openly brutal and forceful. He’s more simplistic than Wick in his fighting choices but nearly as deadly. Their fight scenes often begin with long pauses and intense stares before giving way to outright mayhem. Then, of course, there is Reeves. No action star quite understands how physicality can communicate story like he does. His dialogue may be spare. But his body tells an entire story all its own, even in subdued moments. A glare or half-hearted smile communicates more history than many actors do with a monologue. Where Ares is energetic and Cassius is brutal, Reeves makes Wick elegant in his violence.

Interestingly, Wick often does a sort of flip, locking an opponent between his legs. It’s a move that is typically the domain of female action stars, reminding me of Black Widow’s signature move in films like “Captain America: Winter Soldier.” This demonstrates how Reeves uniquely blends typically feminine and masculine traits with aplomb. During the film’s most memorable fight scenes, Reeves seems like he’s creating dance crafted with punches and gun-fu. He effectively marries the cool grace of Fred Astaire with the sex appeal of Gene Kelly. No modern action star is so brutal and beautiful an equal measure.

But Reeves goes beyond being a talented physical performer in action scenes. The film highlights the thematic preoccupation that snakes through his entire career: loneliness. Reeves has always been best when playing men isolated due to equal parts choice and pathology. Wick’s struggle to find peace and his place in the world is surprisingly moving. Here is a man without any home in the world—emotional or tangible. Amid the high body count and clever design, “John Wick: Chapter Two” is a moving portrait of how loneliness warps the best of us. It ends with room for a third chapter, which I am definitely hoping for, since “John Wick: Chapter Two” demonstrates what film as an art form is all about: it awes and delights, challenges and provokes. It also proves that Keanu Reeves is the greatest modern action star and film is better for his return. 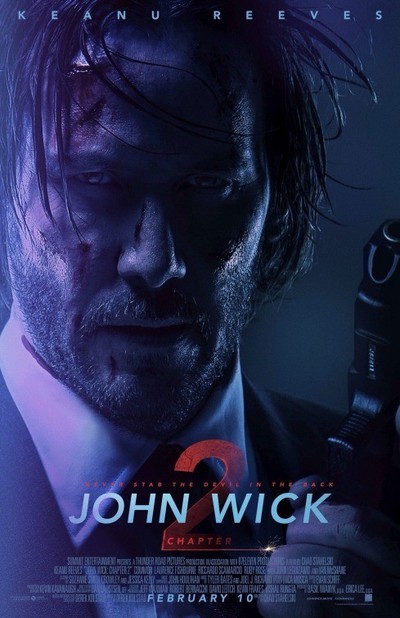 Rated R for strong violence throughout, some language and brief nudity.

Laurence Fishburne as The Bowler King