You would die too if it happened to you

The threat of apocalypse no longer holds consequence enough; for director Don Coscarelli's latest gonzo genre blend, "John Dies at the End," fabricated realities sit worse with its cast of misfits, slackers, and interstellar beings than the so-called "End of the World as We Know It."

In this adaptation of author Jason Pargin's novel, the comic horror extends in many directions, but addiction is chief among them. Soy Sauce, a dimension-bending designer drug, ensnares slacker friends David Wong (Chase Williamson) and John (Rob Mayes). One dose produces an onslaught of nightmarish effects, beginning with hyper-acute psychic abilities, and ending with summoned hellspawn from portals tucked in the shadows. Rationality? Never heard of it.

Desperate journalist Arnie Blondestone (Paul Giamatti) attempts to find some nonetheless, but as present-day David recounts his surreal exploits in a dingy Chinese restaurant, the quest for truth instead leads down a rabbit hole of lunacy and delusion. This is highlighted by the film's title: more theory than spoiler, it assumes a winking, self-aware attitude toward narrative and genre that beckons you to question your expectations of either. And for the first half, it very nearly succeeds.

As director Coscarelli demonstrated in "Phantasm" and "Bubba Ho-Tep," he likes to traffic in scrappy chaos, spicing every dollop of gore with an equivalent dose of laughter. This is nowhere more apparent than in the film's opening sequence, a whirling philosophical riff by David on whether a zombie-skewering axe — thrice repaired — can still be considered the same weapon.

At its finest, "John" glides on this charming fusion of ideas and goofy fun; there are recurring nods to the duplicitous nature of everyday perception — a well-tread avenue in sci-fi, but rarely done with such a vibrant sense of empathy and low-budget charm. How does one react when told they're simply the hallucinations of someone else? As Coscarelli shows, first with a chuckle, and then a creeping realization of horror.

Along with Jones, Turman, and Giamatti, the two leads try their best to rein in the narrative. Relatable yet maintaining an unsteady smirk throughout, Williamson and Mayes are two fresh faces who snugly fit the traditional (and watchable) buddy dynamic. Mayes especially delights, embodying that peculiar quality in your most untrustworthy friend: unreliable for a ride, but essential if the world should ever face annihilation.

When events finally do escalate into urgency, however, Coscarelli pulls back and opts for greater eccentricities and tangential oddities. He's attempting something of grand ambition and scope — sharing the same twitchy vision Richard Kelly displayed in "Southland Tales" — but sacrificing coherence in the process.

As David and John jump dimensions one wisecrack at a time, the narrative disintegrates. Crammed full of asides that reach unresolved plateaus, our main story — David's fight against predetermination and identity — fails to establish any lingering stakes. So, when apparently vital twists occur then later on, any interest vanishes, as significance or gravity are pulverized into pop-culture vapors.

To date, I've remained unexposed to Pargis and his work under the fitting pseudonym David Wong, but what Coscarelli's achieved doesn't feel like an adaptation. It feels more like he seems he skimmed the source material, burned it, and then assembled a vague recollection on film after three days of untold indulgences. It would be quite a shock to hear that the film is entirely faithful to Wong's original story.

A cult following seems to be the audience "John" desires, but more often than not, those pre-programmed genre entries wind up in the nether regions of Netflix. I hope Coscarelli's strange concoction escapes that fate, though. He knows how to exploit horror/sci-fi tropes and adeptly meld a practical effect with a well-timed gag. Many could depict a man's disembodied moustache with the right degree of farcicality, but few can imbue it with such an oddball credibility.

Charlie Schmidlin is a Los Angeles-based writer for Indiewire.com, whose film work has placed him in China, France, and across the U.S.. He is also one of Ebert's Far-Flung Correspondents. 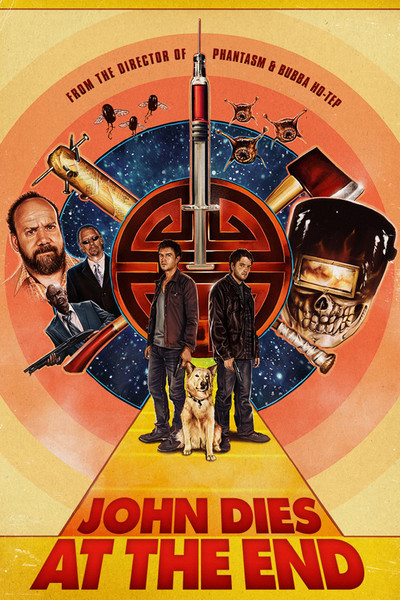