They might be giants but they don't know Jack

Based on those unavoidable TV ads for "Jack the Giant Slayer" featuring CGI-looking giants clomping around and throwing windmills while a hipster-quipster Jack romances a generic-looking princess, I wasn't exactly dreading the screening, but I can't say I had it circled on my calendar, either.

I'm pleased to report, however, "Jack the Giant Slayer" is a rousing, original and thoroughly entertaining adventure. Director Bryan Singer, a first-rate cast and a stellar team of screenwriters, set designers and special-effects wizards have dusted off an old and (let's face it) never particularly compelling fairy tale and have given us a great-looking thrill ride in which we actually care about a number of characters.

There's even room for just the hint of empathy for the giants. It's not easy being a giant. In fact, I have a few questions about the Giant Way of Life, but we'll get to that later.

"Jack the Giant Slayer" begins with the reading of a legend in two very different homes on the same night. Young Jack, a farm boy about 8 years old, has read the story so many times, the pages on his book have nearly worn away — yet he begs his kindly, widowed father to tell him the tale just one more time.

Meanwhile, behind the walls of the castle Cloister, a princess in waiting eagerly absorbs the same story, read to her by her mother, who, like Jack's dad, isn't going to make it past the opening credits of this story.

Cut to 10 years later. Jack has grown up to become Nicholas Hoult, a handsome and almost boringly noble young man now living with his bitter old uncle after the plague took Dad.

Eleanor Tomlinson is Princess Isabelle, who of course is adventurous and romantic and incorrigible, and REALLY wishes she didn't have to marry the gross, old and obviously duplicitous Roderick (the great Stanley Tucci, hamming it up just shy of a mustache twirl).

It takes a long while — truth to be told, a few scenes past the point of perfect timing — before we get to the magic beans and the stalk that shoots to the sky and the mysterious land above Earth populated entirely by giants. But once we get there, game on.

Especially when seen in close-up, the giants are pretty awesome. They're a grotesque bunch of louts, picking their noses and passing gas and making pigs in a blanket, which are literally pigs. In blankets.

As usual, the 3-D is mostly about 2.5-D, though we do get a few battle scenes where you want to duck. But over all, the special effects are impressive. It really looks like those little men are battling those giant-ass giants, who are led by a two-headed general, with the invaluable Bill Nighy buried somewhere in there playing the general.

There's no way you can have a fair fight between giants and people, so there's a convenient device to level the playing field; a magic crown, forged from ingredients including but not limited to the heart of a long-ago vanquished giant. He who wears the crown has complete command over the giants, and it's the evil Roderick's plan to whip out the crown at just the right moment and lead the giants to a conquest of Cloister and all the kingdoms of Earth.

(You'd think Roderick would have been pleased with the deal he already had: marrying the hot young princess, commanding the kingdom and living a cushy live, but there you have it.)

"Jack the Giant Slayer" is filled with neat touches, from the casting of Ewan McGregor as Elmont, a knight in shining armor who's supposed to be the hero of the story and is indeed A hero, but not THE hero, to an epilogue that's just flat-out cool. The PG-13 violence, including a close-up of an eyeball popping out of a giant's face, means the action is a little too intense for very young children. But for everyone else, including cynical grown-up critics who didn't think they'd ever give a Fee, a Fi, a Fo or a Fum about this movie, it's a terrific adventure.

Oh, right: the giants. They live in this world between Earth and heaven, and if you're willing to overlook the scary rock formations and the isolation, it seems like a pretty sweet deal. Lush greenery, room for a giant to roam around, plenty to eat if you can curb your appetite for humans.

What I want to know is, where are the lady giants and the teenage giants and the baby giants? If there are no women, how do these guys not die off? They're not immortal, because several get killed during this movie.

It would have been kind of neat to meet the wife of a two-headed giant general, just to see what her deal is and how she spends her days. Maybe someday. 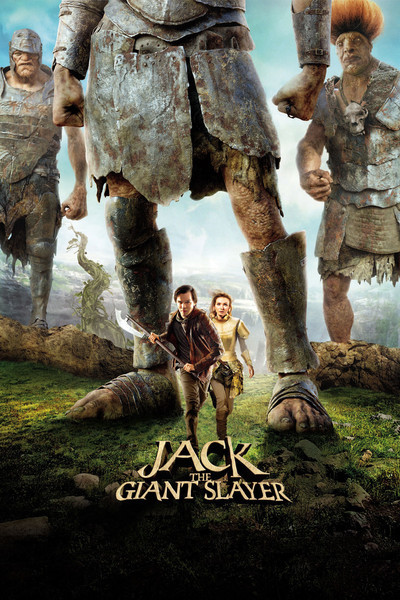