"Ivory Tower" raises a number of fascinating questions and offers numerous facts on the current, deeply flawed state of the American system of higher education but suffers from a lack of focus or even a hint of what we do about the situation. In fact, there are at least three sections of "Ivory Tower" that could be branched out into their own, more satisfying standalone documentaries, including profiles of the UnCollege Movement, the recent events at the Cooper Union, and the lessons learned in the relationship between San Jose State University and the online learning company Udacity. There’s enough interesting, raw material in "Ivory Tower" to consider but one wishes it was shaped into something more cohesive and pointed in its attack and approach.

Is college overrated? For so much of American history, college has been sold as the key to the future. More and more, it’s a key that’s coming with baggage, including thousands of dollars in student loans. Competition for prestige among high-profile universities has led to rampant expansion. More programs means more facilities, means more students, means more attention, and so on. And all of it means more tuition. The cost of an education has increased more quickly in the past few decades than any other good or service. And as federal money has been taken away from our country’s education, the loan movement has begun to resemble the subprime housing crisis, giving people debt that their children will have to repay. Worst of all, no one is sufficiently asking what our increasingly in-debt kids are getting for their high-APR loans. Someone should. And "Ivory Tower" serves as a way to start the conversation about why education is seen as a financial privilege instead of a right for all who need it or are willing to work for it. Half of our college-educated people in this country under 25 are underemployed or unemployed, with debt that is increasing at rates that should be illegal. Something has to be done.

It’s understandable that "Ivory Tower" director Andrew Rossi isn’t certain what that "something" is but his unfocused approach for at least the first half of his documentary is downright jarring. Stats fly across the screen like the fact that 68% of the students who are paying small fortunes for their education at public universities won’t graduate within four years. And then we’ve moved on before that stat or its impact is placed in context. The film jumps from the impact of Harvard on the education system as a whole to the party school atmosphere at Arizona State University to the interesting story of Deep Springs College, without spending enough time on any of these stories to give them resonance.

Until Cooper Union. If you don’t know the story, Cooper Union is a Manhattan college that was founded on the radical model of free education and continued to provide tuition-free learning for decades. Until recently. When a new President, Jamshed Bharucha, came to the conclusion that the school could no longer survive without charging students to learn there, chaos ensued. Critics pointed to the debt amassed by the construction of a very expensive new building on campus and the $700k+ salary of their new leader, and students did what so many critics of millennials claim they are incapable of doing: they staged a revolution. They protested in the form of a sit-in in the President’s office. This chapter of "Ivory Tower" is easily its strongest, and could have served as the whole documentary, seeing as it is really the culmination of so many issues in our educational crisis today.

I had similar feelings about later chapters on the UnCollege movement—a San Francisco-based community of people who are trying to use so many of the tools now available to young people to learn without academia—and the fascinating story of Udacity, one that reminds us of the value of traditional education.

Perhaps Rossi places the Udacity saga near the final act of "Ivory Tower" to circle back to the beginning. "Well, the Harvard model may not be working, but we haven’t found a better one." If the message of "Ivory Tower" is that we have to accept our broken system, it’s a hard one to take (especially for this father of three). The crucial question that "Ivory Tower" fails to ask is the most important one of all: What do we do now? 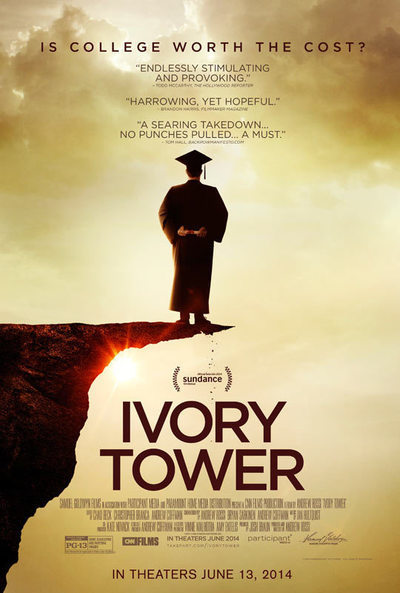 Rated PG-13 for some suggestive and partying images.