A deep understanding of film history melds with the passion of a true lover of the form in the excellent documentary “Is That Black Enough for You?!?,” which shapes the history of Black cinema up to and through one of its most vital chapters in the 1970s. New York Times critic Elvis Mitchell wrote, narrated, and directed this incredibly ambitious project that includes clips from over a hundred feature films, intercut with interviews with legendary performers like Samuel L. Jackson, Laurence Fishburne, Whoopi Goldberg, and an amazing Harry Belafonte, who is so fascinating that one almost wishes Mitchell just spent two hours with him alone. Belafonte is only part of the story of Black people both on film and behind the scenes, elevated by Mitchell’s writing. But the real strength here is how expertly he assembles his film, not just providing highlights of movie history but connecting them to one another, revealing how Micheaux leads to Poitier leads to Hayes and so on. Movies are visual history books, time machines to different eras, but it takes a guide like Mitchell to understand how these eras don’t exist in a vacuum—they both reflect culture and impact it simultaneously.

At first, “Is That Black Enough for You?!?” is almost unfocused in its freewheeling structure, moving back and forth through the history of Black cinema in a way that feels more personal than chronological. Of course, the never-hesitant Mitchell isn't afraid to take big swings at the canon almost immediately, noting the casual racism in so many beloved films and even children’s cartoons. However, despite his almost-conversational tone, he’s being very deliberate in the structure of this film from the very beginning, setting up how artistic movements come from choices that may have been made generations before. As he settles into a more chronological structure after getting to the ‘70s, the knowledge base of the first part of the film informs the history lesson. He rarely explicitly draws lines from one project to the next but really captures how art and culture mix, making for a documentary that could have been dry so riveting.

Mitchell is very careful to frame Black cinema as a part of all cinema, noting how it was influenced by movements that often started in white culture like the Western and the horror film, and, interestingly, noting how often the visions of Black creatives would then shape their non-POC counterparts. Every time you think he may skip over a chapter of Black movie history, he finds a way to incorporate it. It’s a stunningly comprehensive documentary, even at 135 minutes—lesser creators would have been too distracted by the “highlights” to even attempt something this packed with different projects.

"Is That Black Enough For You?!?" directly but also indirectly answers the question of what happened to Blaxploitation cinema. It filtered out into so many other forms of filmmaking in the decades to come, leaving its fingerprints all over various kinds of cinema, and shaping culture through long overdue representation. Mitchell makes a very solid case that the Black cinema of the ‘70s was just as formative and influential as the white auteurs who so commonly define that revolutionary era.

“Take pleasure in what you do—that belongs to you.” That’s part of a fantastic quote near the end of Mitchell’s film, and it encapsulates both the personal passion of the piece and how this entire project is about ownership. It’s a reclamation of the traditionally white canon of film history that pulses with the passion of its creator and the voices that inspired him. People often ask about why diversity and representation matters, even turning it into a combative talking point against allegedly woke culture. I can’t fathom someone walking away from this documentary and not having a greater appreciation for the need for every voice to be heard and everyone to feel represented through art. There are so many stories out there to be told. And we are all richer when our art amplifies them.

In limited theatrical release today and on Netflix on November 11th. 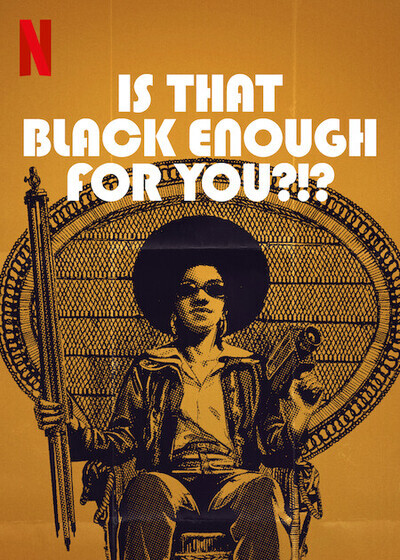 Margaret Avery as Self

Charles Burnett as Self

Laurence Fishburne as Self

Whoopi Goldberg as Self

Samuel L. Jackson as Self

Suzanne De Passe as Self

Glynn Turman as Self

Billy Dee Williams as Self