Into the Grizzly Maze

If you watch "Into the Grizzly Maze" expecting a testosterone-boosting animal attack horror film, you will not only be disappointed, but also want to swear off flannel, whiskey, fire-axe juggling, and other typical manly hallmarks. This is, after all, a boring man-vs.-nature film about two estranged brothers who try to shoot, and out-glower each other while they search a vast national park for a missing deaf woman and a mutual friend's husband, the latter of whom is engaged in poaching. So much time is spent on macho posturing that you wind up rooting for the wild grizzly bear that's stalking the film's human protagonists. But even that animal, who is credited in the film's opening credits as "Bart the Bear," is presented in over-edited, crash-zoom-heavy sequences that will make you feel like you're watching an Z-grade SyFy Channel movie that also happens to star A-listers (Ok, maybe A-minus-listers) like James Marsden and Billy Bob Thornton. "Into the Grizzly Maze" is bad where it counts, and tedious throughout.

"Into the Grizzly Maze" is so grating in its retrograde chest-thumping that it might as well be sponsored by so-called Men's Rights "activists." Rowan (Marsden) comes home to Rowley, Alaska after a seven year absence. After mysteriously accepting a clearly-charted map of a nearby forest from a friend's wife, Rowan checks into a motel, and is soon arrested for beating up a local pimp (naturally, the pimp was hurting a cowering, defenseless prostitute). The man who arrests him is Rowan's brother Beckett (Thomas Jane), a mirror-glasses-clad deputy sheriff who joins Rowan on his rescue mission, but only because he too is looking for someone: his deaf conservationist wife Michelle (Piper Perabo).

Since "Into the Grizzly Maze" is set in the sultry, musk-slathered world of men, the film's female characters are either accessories and/or victims. Sensitivity is for sissies, as we see by the way that Michelle and Beckett's medic companion Kaley (Michaela McManus) repeatedly hurt themselves and get into trouble before either Rowan or Beckett can. It's up to the film's two male leads to beat trigger-happy tracker Douglass (Thornton) to the bear (Bart) that's stalking Johnny Cadillac (Adam Beach), the poacher-with-a-heart-of-gold that Rowan originally tries to save from the dense "Grizzly Maze" trail.

Much of Rowan and Beckett's squabbling is adolescent squabbling, the kind that Kaley wisely sums up when she rhetorically asks the brothers "What are you, twelve years old?" They are not twelve years old, but they do act like icons of Disneyfied pre-adolescent empowerment in scenes like the one where Rowan stands on a wind-swept cliff and looks off into the distance, as if the fate of the food chain rested on his broad, rugged shoulders. The weight of the film's moral dilemma rests on those shoulders, and the shoulders of every other character with a gun and a penis. Even Beckett, a character who is shown to be ham-strung by his wife's belief in humane animal treatment, is flat-out ineffectual compared to Douglass, a character who may be kill-crazy, but is also knowledgeable enough to provide the film with an accurate description of Bart's righteously pissed-off character.

Speaking of which, did you forget that "Into the Grizzly Maze" is supposed to be a monster movie? Because while the film's creators never do, they're not very good at delivering genre movie thrills either. The most gruesomely violent scenes in the film don't involve bears, but do feature a couple of screaming, defenseless women with gaping wounds. So whenever Bart shows up, and does his thing, he's totally wasted. Bart roars a lot, and gives good chase, but he's never filmed in a way that makes the most use of his immense size, and natural ferocity. You can tell that Bart's been short-changed in later scenes where he's filmed with bad CGI blood covering his muzzle. If you can't really make a big honkin' bear scary, maybe you shouldn't be making a bear-attack picture at all.

Which brings us back to the biggest problem with "Into the Grizzly Maze": unless you're avidly interested in helicopter shots of cedar trees and momentary glimpses of a very large animal, you will probably wind up fixating on the film's lackluster human drama. Which is a shame, since watching grown men bicker, and insist that they're more right than each other gets old very fast. "Into the Grizzly Maze" is the kind of bad horror film that makes you return to older schlock like "Grizzly" with unearned reverence. This is not productively bad: it's just bad. 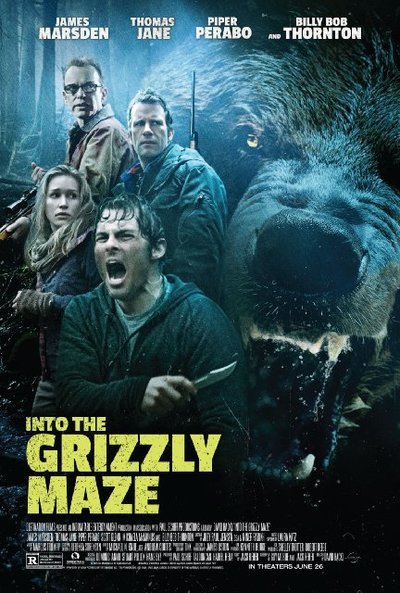