There is a really fascinating film that blends horror and romantic drama subjects into a unique, complete vision over on Shudder in “After Midnight.” Over on Hulu, there's "Into the Dark: Tentacles," a less successful film that tries to do something similar for your Valentine's Day pleasure but never comes together in this return of the once-monthly series of holiday-themed horror flicks. After a COVID-induced hiatus—the last film in the series dropped in July in “Into the Dark: The Current Occupant”—the Hulu series returns with some love-themed tension that works every now and then, but the heartbreaking thing on this holiday is that most of the problems with this series appear to have survived coronavirus.

“I know what it’s like to run away,” Tara (Dana Drori) tells Sam (Casey Deidrick) as their relationship is getting more intense. After a foreboding opening scene in which Tara appears terrified, “Tentacles” opens as a relatively straightforward relationship drama. After meeting at an open house, photographer Sam allows the mysterious Tara to fix up a house he owns and the two start dating, falling into a deep, all-consuming relationship quickly. They spend almost all of their time together, and Tara admits that she has a stalker who has terrified her into hiding. Of course, it’s pretty clear there’s more going on than a mere woman-on-the-run story and Tara has been keeping more than just a stalker from her new man. And that’s not just because of the shooting pains and blood coming from Sam’s ears. Tara seems to be literally physically impacting him.

“I wish there was some way to show you other than sex or talking—some way to touch brains.” In most episodes of “Into the Dark,” there’s a turning point, a moment in the film when it could really take off and become its best self. Here, in this line and the action around it, “Tentacles” threatens to become true Cronenberg-esque psychosexual body horror, to truly get into how passion can physically change us. And the film definitely deserves some credit for being more willing to go there in terms of sex and eroticism than most modern horror films, especially in this series. There’s almost always an interesting idea in every “Into the Dark,” and a journey of two people who become so obsessed with one another they ignore warning signs and spiral into a Lovecraftian nightmare? Sign me up.

Sadly, “Tentacles” never lives up to that potential. Also like too many episodes of “Into the Dark,” the ideas are half-baked and inconsistent. Instead of blending elements of romantic dramas and body horror, they kind of just bounce off each other, never producing a truly interesting hybrid. Part of the problem is that Sam and Tara are boring. They need to be intriguing people on their own who then lose their humanity in one another. Aranovich isn’t interested in these people like the best movies of this kind. (For something similar but far more effective, check out “Spring.”) Drori and Deidrick are perfectly fine and actually have strong chemistry, but they’re just unengaging characters. Even worse, the imagery fails the piece's mood until the final act. If you’re going to give us a bland romantic drama, at least make the grisly fates of these bland people memorable.

It’s fun to have “Into the Dark” back. Plus, overall, season two was shaping up to be more ambitious and accomplished than the first. And there are certainly worse chapters than “Tentacles,” but it reminded me more of the "Into the Dark" films that needed a little more time in every phase of development—one more rewrite, a few more takes, a tighter edit. Let’s hope future installments find the time to consider more before jumping into their cinematic relationships. 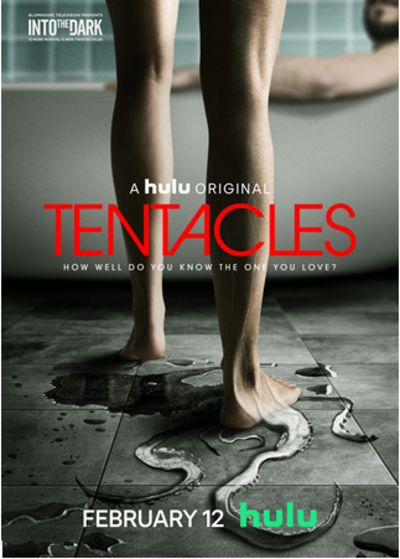