Into the Dark: Pooka Lives!

Believe it or not, Hulu’s series of original horror films under the “Into the Dark” banner has its first sequel! Nacho Vigalondo’s “Pooka!” gets a tongue-in-cheek update in “Pooka Lives!,” a movie that’s at its best when it seems to be playfully mocking its very existence and is less effective when it tries to be a commentary on the poisonous nature of internet virality. For the most part, the better “Into the Dark” episodes have had a dark sense of humor, and a film that turns a childhood toy into a slasher villain has to have a heady dose of that to work. Sadly, the promise of the first half of “Pooka Lives!” doesn’t really pay off in the second half or the non-ending, but there’s still enough to like here to place it in the top tier of “Into the Dark” movies, and allow us to look forward to the inevitable “Pooka: A New Beginning!”

The first film was about a man who was forced to dress as the latest hit child’s toy, a creepy teddy bear named Pooka, and how the job might have driven him crazy. The second film ignores the first movie’s entire existence other than its creepy Furby-esque title character, opening with the creator (Rachel Bloom) of the Pooka doll, after being fired by the company, murdering her husband and then lighting herself on fire. The urban legend goes that the Pooka mask she was wearing melted to her face. It’s a crazy opening scene that ends with the word LIVES being lit on fire across the screen like an old “Friday the 13th” sequel.

But “Pooka Lives” is not just about a slasher in the form of a giant, red-eyed teddy bear (although it may have been better if it was). Director Alejandro Brugués (“Juan of the Dead”) tackles the very concept of virality via a man returning to his hometown after being targeted by internet trolls. Derrick (Malcolm Barrett) made the mistake of writing a book about shallow online personalities and pissed of a really powerful one named Jax, who now launches his horde against Derrick every day. Derrick moves in with a couple of old friends (Felicia Day & Jonah Ray) and gets a job working with an ex (Lyndie Greenwood) on the Pooka marketing team. One night after a few hash brownies, they get the idea to try to make their own viral Pooka event, starting something called the Pooka Challenge. They’re essentially trying to create their own Momo or Slenderman through the legend of Pooka and its homicidal creator. And then stories start surfacing that people who do the Pooka challenge are ending up brutally murdered.

There are undeniably fun nods to the awful world of the internet in which we now live, like a meme of Pooka woven into “The Snowman” poster that made me laugh, but Ryan Copple’s script is better when it’s just having dumb fun in terms of action/horror. There’s something about someone in a giant Pooka costume holding on to a speeding car like he’s Mike Myers that is more fun than a lot of modern horror is allowed to be. And Brugués' approach is best in these scenes and less effective when the film tries to say anything remotely serious about trolling or internet virality.

Worst of all, “Pooka Lives!” decides to go with a non-ending, rolling credits just as it’s about to promise its most intense action. Perhaps they suspected someone would just continue the story online. If you dare! 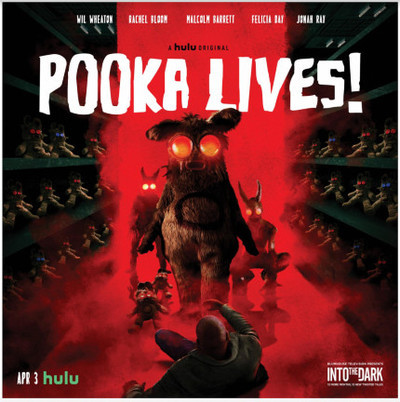