Into the Dark: Delivered

Pregnancy is a fertile time for horror filmmakers (pun slightly intended). Any parent will tell you that there’s inherent fear and apprehension in those nine months, amplified as the due date for a first child approaches. Not only are you about to be responsible for a life other than your own but everything about your daily existence is going to change forever. It’s scary. And then add how much pregnancy, especially the final trimester, comes with its own emotional and physical hurdles. Finally, throw in the fact that pregnant women are inherently more vulnerable in the world of horror—it’s not easy to flee a sociopath when you’re eight months pregnant—and it’s no wonder that genre filmmakers have used pregnancy as a weapon to induce fear. While pregnancy horror can often feel like a manipulative trick, director Emma Tammi (“The Wind”) avoids most of the traps of the subgenre, allowing two actresses to effectively anchor the realism of “Into the Dark: Delivered.” It’s a Mother’s Day present no one was expecting.

“Delivered” is the story of a very pregnant woman named Val (Natalie Paul) who seems to be having understandable anxiety about her impending motherhood. She’s going through the motions of attending birthing classes and preparing a nursery, but she seems unsettled and uncertain. Enter a new friend at class named Jenny (Tina Majorino), who offers to be a much-needed support structure for these terrifying times. Of course, from the minute anyone who knows they’re watching horror movie sees Jenny they’ll suspect something is very wrong with her, and “Delivered” turns early from a character drama about a hesitant mother to a survival thriller more akin to “Misery” than “What to Expect When You’re Expecting”.

When “Delivered” focuses on its two female protagonists, it’s viciously effective, thanks largely to the committed, complex work by Majorino, who gives one of the best performances in the “Into the Dark” series. These films haven’t really allowed for interesting character work. I realized while watching “Delivered” how often these Blumhouse originals hinge on concept instead of character, but that the best ones, including “Culture Shock” and “New Year, New You,” are anchored by strong performances. Majorino is fantastic here, finding the tragic undercurrents under her character that make her even scarier than if she had just been a caricature. She plays trauma with even a tinge of regret over what she’s doing, making Jenny far more three-dimensional than she would have been in a lesser version of the same film.

Sadly, Tammi and writer Dirk Blackman (“Outlander”) resort to a few too many obvious techniques. There are at least four times when Val has a nightmare and it starts to feel like she needs to talk to someone about her bad dreams more than anything else (the “it was just a dream” thing feels like a way to pad out a thin story that doesn’t even run 80 minutes with credits). There are other cheap screenwriting turns too, like an address conveniently written on a notepad and left in a place for a rescuer to find it, and newspaper clippings that are easily discovered to provide Jenny's backstory.

However, every time I almost wrote off “Delivered” for tricks like these, Majorino would do something to bring me back. Like Kathy Bates did with Annie Wilkes, she reckons with the sadness beneath the sociopathology, which makes her way more interesting than your standard pregnancy horror villain. After all, having kids may be scary, but nothing is scarier than crossing paths with the wrong grown-up. 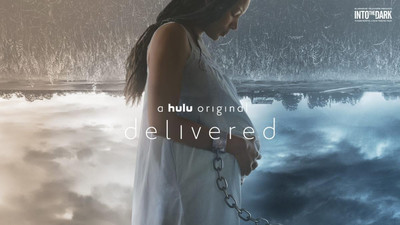