"The Wind," an impressive horror/western hybrid, is the kind of artful genre movie that some filmgoers think simply doesn't get made anymore. It's a modestly-scaled character study about Lizzy (Caitlin Gerard), a resourceful, alienated frontierswoman who—living in a desolate cabin in the middle of an undisclosed part of 19th century America—slowly loses her grip on reality. Over the course of the movie's 87-minute runtime, director Emma Tammi and screenwriter Teresa Sutherland pare down Lizzy's narrative so that viewers only see and understand what Lizzy (often reluctantly) sees and understands herself. The resulting episodic narrative is light on dialogue and heavy on ambiance; it's precise to an unsettling degree since a number of scenes start and stop whenever Lizzy can feel her way in and out of them. And most importantly: the scenes we do see are not in linear or chronological order—they are shown to us as they are recalled by Lizzy, not as she originally experienced them.

"The Wind" is a frequently alienating movie since it asks viewers to empathize with an isolated, self-sufficient character as she actively loses control of her narrative. As I watched "The Wind," I was reminded of the creative freedom and formal experimentation of great 1970s acid westerns and psychodramas like "Ride in the Whirlwind" and "Repulsion." Time will tell if "The Wind" is as good as those earlier films, but it is reminiscent of those kinds of movies, mostly because "The Wind" is as lean and exact as its predecessors.

For starters: Lizzy is a sympathetic character even though she is not completely relatable. That seemingly minor distinction will make more sense as you watch "The Wind" since so much of Lizzy's story boils down to our growing inability to trust her. Still, we can't help but try to connect with Lizzy even as we realize, early on, that she is unreliable. In the movie's dialogue-free opening sequence, we see Lizzy hand over a bundled-up baby to her husband Isaac (Ashley Zukerman). She's covered in blood, but it's not hers. Isaac fidgets and unhappily fusses before taking the baby away. Lizzy is then left with the unpleasant task of scrubbing down a broad, blood-soaked wooden table with a bucket of soapy water and a hard-bristled broom-head. The child's mother is also pretty dead; there's a gaping hole where part of her face used to be. This unnerving introduction ends with Lizzy asking her husband how the dead woman got ahold of Lizzy's gun. He doesn't answer, so we don't know. Not yet anyway.

The rest of "The Wind" seemingly follows Lizzy as she and Isaac struggle to get on with their lives. He's gone for long stretches at a time, leaving her alone, save for occasional visits from their good-natured, but flighty neighbor Emma (Julia Goldani Telles). It doesn't take belong before Emma's superstitious beliefs—she clings to a Penny Sermon-style pamphlet about the various demons that haunt the American plains—start to speak to a part of Lizzy's own conflicted headspace. And while Lizzy doesn't make as much of a fuss about her own inner conflict, that's probably because she is a modest, religious woman (she prays in German in a scene or two, which gives us a small clue about her upbringing). So when Emma reminds her of her own problems, Lizzy primly snaps at her friend: "Please don't be unpleasant in front of the men." Still, like it or not, Lizzy believes she's surrounded by supernatural forces—she sees wisps of black smoke, a pack of hungry wolves, and other bad omens—well before she meets Emma.

What makes Lizzy's story so striking is the sensitive, but unsentimental way that Tammi and Sutherland tell it. There are no real antagonists here, especially not Emma or Isaac. At the same time, we're stuck with Lizzy as she tries to think and to act her way out of a situation that she and two or three other people are simply ill-equipped to deal with. Even Isaac has his limits; even Emma; even Lizzy. So while Isaac and Emma both sympathize with Lizzy, Emma is too disturbed to be "pleasant" and Isaac is too impatient to take Lizzy at her word. He sees the Penny Sermon that Lizzy has seemingly taken from Emma and he immediately disapproves of it. But that doesn't mean that Isaac doesn't care about Lizzy; he even tells his wife point-blank that "the next time you see a demon—you shoot it."

As storytellers, Tammi and Sutherland are commendably unsparing—they leave viewers to decide if the events depicted in "The Wind" are a result of Lizzy's mental illness or a supernatural haunting. They also only sparingly show viewers the spooky goings-on that afflict Lizzy (these relatively generic scare scenes are, to my mind, the movie's weakest). And, perhaps most notably: Tammi and Sutherland periodically interrupt Lizzy's descent into madness with flash-backs and flash-forwards that add a meta-layer to viewers' growing ill ease.

In this light, it's not surprising that the scariest line of dialogue in "The Wind" is one that's also meant to be reassuring. Isaac, now irritated with Lizzy, tells his wife that the only way to stop indulging in her private fantasies is to cling to something bigger than herself, which in this case is his unwavering belief that Lizzy is only seeing things. "Your mind's looking for things to worry about," he says. "It's just you and me." 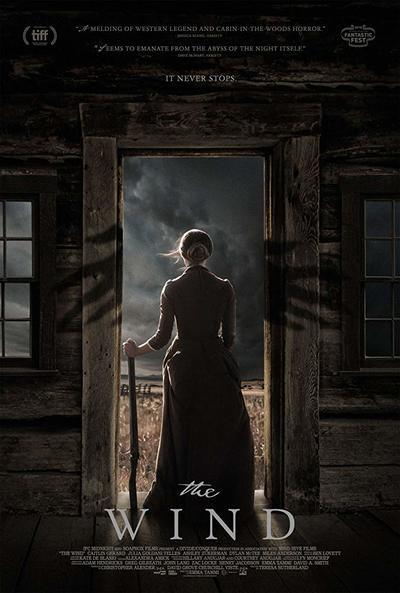 Miles Anderson as The Reverend