“Into the Ashes” tells a blood-soaked story of violence, betrayal, and revenge that's so familiar that if one of the actors on the screen inexplicably forgot what to say, a viewer could feed them their lines without hesitation. The problem is not that it tells a story that's been done many times before, but that it never finds a new or interesting way of approaching the familiar material. Instead, it merely goes about with the kind of plodding predictability that makes you wonder why anyone involved with the project felt that it needed to be told in the first place. And on the very rare occasions when it threatens to try something different, it only takes a few minutes for it to hurry back to the safety of the well-beaten trail.

Set in rural Alabama, the film is centered around Nick Brenner (Luke Grimes), a man who seems to have everything that a guy like him needs for a reasonably good life—a steady job, a loyal best pal in Sal (James Badge Dale) and, most significantly, a loving wife in Tara (Marguerite Moreau). As it turns out, Nick also has a secret that he has kept from everyone—he used to be part of a violent criminal gang and stole the proceeds from their last job, taking off as the boss of the group, Sloan (Frank Grillo), was going to prison. Having just been released, Sloan, along with a couple of cohorts, sets off to track his former partner down and in the inevitable confrontation, they take away the most important element of Nick’s world before putting a couple of bullets in him for good measure. He survives and, to quote from the film’s promotional material, “Nick must decide if he will stay on his new path or indulge in his need for revenge and force his enemies to pay for what they have done.” Naturally, I would not dream of revealing which path he chooses but considering the number of people brandishing guns on the poster, the answer should not be too difficult to figure out.

As you can probably surmise, one does not exactly have to be a walking version of IMDb to realize that “Into the Ashes” is not exactly teeming with originality or innovation. Film buffs could even amuse themselves by watching it by coming up with their own individual lists of films that evidently inspired writer/director Aaron Harvey along the way. However, there is never any real sense of what it was about this particular story that compelled him to make it in the first place. The storyline is fairly superficial, the characters are thinly drawn and the insights that it offers regarding violence and revenge in conversations between Nick and his grieving father-in-law (Robert Taylor), who also happens to be the local sheriff, veer between the empty and the vaguely insulting. There is essentially one sequence in the film where things threaten to become interesting—a sudden cut to the aftermath of a bloody shootout that is both eerie and disconcerting in the way that it simply and quietly observes the result of a few moments of unimaginable brutality without indulging in the expected orgy of blazing guns. Alas, it must have proved to be a little too disconcerting because only a few minutes after this surprisingly subtle touch, Harvey essentially takes it back by inserting a flashback that offers up all the flying bullets and spurting blood anyway.

“Into the Ashes” is not marginally different from the kind of violent revenge dramas that Charles Bronson used to crank out back in the day. Granted, most of those films were not very good either but at least benefitted from his considerable and often underrated screen presence. Alas, this film rests on the shoulders of Luke Grimes and he simply doesn’t have the presence or pull to make it work. He isn’t bad, per se, but you just never really buy him as a person at any given point—there is no real sense of the happiness that he is supposed to be feeling about the second chance he has been given with Tara nor the sense of rage and helplessness that he is mean to be consumed by after she is taken away. What makes this especially frustrating is that the film contains two actors—Frank Grillo and James Badge Dale—who have both the acting chops and screen presence that could have been successfully deployed but who are instead relegated to supporting roles.

Every once in a while, a little crime drama will come out of nowhere and impress with its combination of style and originality—that happened this year with a nifty little effort called “The Standoff at Sparrow Creek,” which you should really check out. This, however, is not the case with “Into the Ashes.” To be scrupulously fair, it is not necessarily a terrible movie. (If it had been truly terrible, it might have contained the kind of energy sorely lacking here.) It has been made with some degree of style and Grillo and Dale manage to overcome the cliched dialogue and characters that they have been handed. It's just that "Into the Ashes" never comes to life. 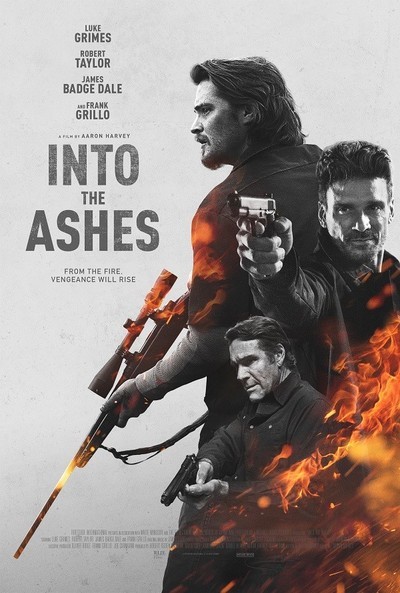