"Insidious: Chapter 2" is a puzzle movie with too many unnecessary pieces and not enough essential ones, but it's superior to its predecessor in a few basic ways. The first sequel to James Wan's "Poltergeist" homage/ripoff features a couple of set pieces that are thoughtful enough to be scary. This goes a long way in a film where characters constantly explain why and how supernatural happenings occur. And unlike its predecessor, this sequel doesn't overuse jump scares and loud noises. For better and worse, screenwriter Leigh Whannell has brought the same klutzy ambition to the "Insidious" films that he did to the first three "Saw" movies (Whannell did not script "Saw"s 4-7, though he did co-write "Chapter Two"'s story with Wan). His ideas for "Insidious: Chapter 2" are spectacularly misconceived, but they're also the main reason why the movie isn't that bad.

"Insidious: Chapter 2" starts where the last film left off. The Lambert family is still haunted. The body of Josh Lambert (Patrick Wilson) is possessed by the spirit of a mysterious bride in black, and his wife Renai (Rose Byrne) doesn't know it—I mean, she should know it, after looking at a ghost-revealing photograph taken by Elise (Lin Shaye), a dead medium, but Renai is presumably not in her right mind after seeing this photo.Elise previously warned Renai that moving is pointless since her son is haunted, not the Lamberts' home, but Renai and not-Josh move back into Josh's childhood home anyway—which is also odd since Renai is told, both in the last film and "Chapter 2," that Josh was also haunted as a child. So, to avoid a haunting, the Lamberts return to the site of an earlier haunting. But once household items start moving on their own again, Renai, and ghost-busters Specs (Whannell), Tucker (Angus Sampson), look to retired psychic Carl (Steve Coulter) for answers.

Unfortunately, looking for answers in a Whannell-scripted film is more trouble than it's worth. It's easy to ignore the generic illogic of some plot points: Why is a group of adults searching an abandoned hospital at night? Why are characters recapping the events of the last film to each other? (Specs to Tucker: "You and I have first-hand knowledge that there's something beyond death.")? It's harder to overlook the way Whannell selectively plugs up the plot holes he's created to let Wan achieve certain effects.

This sometimes results in effective set pieces, like when Renai's group discovers a roomful of corpses; at that moment, you don't need to understand what's going on. But watching characters exhaustively explain why they can and cannot do certain things grows tiresome. It's easy to ignore the fact that Josh is inexplicably lost in "The Further," an astral plane where his soul is struggling to reconnect with his body, but not after he reminds viewers, "I am getting weaker the longer I am trapped from my body." At that point, Whannell inadvertently puts a loose plot thread in viewers' hands and hopes we won't pull too hard. (Wasn't it established in the first film that Josh is/was a gifted astral-plane traveler? Why is he so lost? Why can't he get back into his body?).

Wilson deserves guarded praise for his sometimes-effective performance. When he's allowed to cut loose, he hams it up like Robert "Freddy Krueger" Englund playing Jack Torrance.  And while the movie's mythology is needlessly convoluted, at least it paints both Wan and the film's game cast into a much bigger corner. The fact that the film is set in more than one haunted house gives Wan more freedom to try new things, and to perfect some old tricks, too. 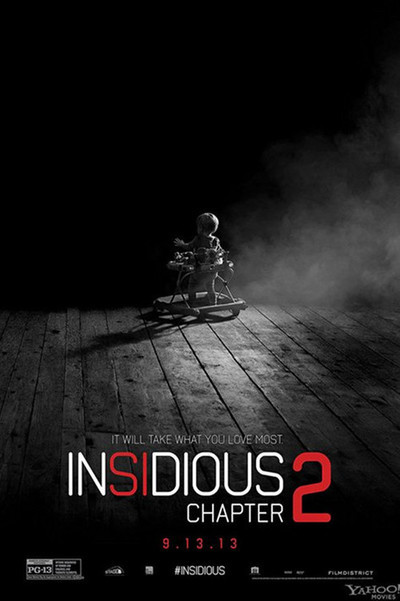