The 2008 horror film “Martyrs,” written and directed by Pascal Laugier, created a mild sensation on account of being both a kind of all-torture-all-the-time movie and also aspiring, by the lights of some observers, to a form of high philosophical seriousness. Laugier’s film, in which a victim of childhood torturers takes grisly revenge years later, and a friend who believes this victim was terribly mistaken discovers, horrifically, just who was actually in error, made near-overt references to the observations on death and knowing first put forward by French novelist and philosopher Georges Bataille. Bataille, while in many respects an impressive figure, was also, at least by this reviewer’s lights, a first-rate purveyor of highfalutin gobbledygook. I get why genre fan-persons would be eager to invoke his name to legitimize tripe like Laugier’s film, but I wasn’t buying it then.

And I’m not buying “Martyrs” now, either. For all its violence and extreme nihilist posturings, one thing the original did not have was English-language dialogue, and so screenwriter Mark L. Smith, who’s probably gonna spend the next couple of days saying “Hey, I co-wrote ‘The Revenant’ too, come on,” and directors Kevin and Michael Goetz have obliged in that department. Additionally, they’ve cast Young American Television Starlets Bailey Noble and Troian Bellisario to scream, bleed, get chained up, fire a shotgun, endure near-flayings, and so on.

The movie opens with young Lucy escaping a torture chamber in what looks like a disused industrial loft, which the cops then examine in the dead of night with no lights on, as cops will. She’s placed in an orphanage, befriending Anna, who wants to believe Lucy’s story of a monster pursuing her. Cut to years later; a sun-drenched house in a quiet suburb, where a burly dad is doing some excavating, and mom is sending off feuding teenage siblings. Into this pleasant valley scene (in which a close-up of a chef’s knife slicing a tomato is meant to serve as a pre-echo of the gore to come, very clever) saunters now-grown-up Lucy (Bellisario), who dispatches the whole brood with a shotgun. She claims to upset Anna (Noble) that these were her torturers. Anna’s subsequent discovery that certain wounds of Lucy are self-inflicted leads her to a sense of doubt. But the discovery of a secret basement chamber in the house confirms Lucy’s claims—and much, much worse.

If you’ve seen the French-language original you know the plot’s “secret society” twist; in the U.S. iteration this band of explorers into the unknown—they torture for a cause, you see, which is to unlock the secrets of life in or after death, or something—is more pseudo-scientific than philosophical. The movie also makes some substantial adjustments to the movie’s plotline, all of which are very, shall we say, “U.S.A.! U.S.A.! U.S.A.!” The directors also pay lip service to the notion of wrenching tragic poignancy out of Lucy’s predicament, putting heart-pulling strings under flashback/hallucination scenes in which she talks to her younger self. But nothing works. The substitution of Good Ol' American Girl Power for Half-Baked French Pseud Nihilism does nothing to clear up the stench of this project’s fundamental motivations. Despite being pitched at the grindhouses, a movie like “The Texas Chainsaw Massacre” succeeds because its vision was borne out of genuine dread and confusion. Both the French and U.S. iterations of “Martyrs” are transparently voyeuristic cheaply ginned-up Guignol peep shows with intellectual pretensions. Of course, if that’s what you’re into, dig in! 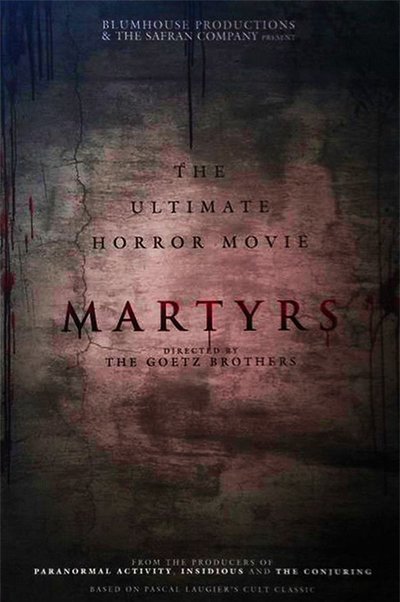