I’m sure Mark Wahlberg, Chiwetel Ejiofor, and Toby Jones signed on to Antoine Fuqua’s globetrotting sci-fi action flick “Infinite” with the best of intentions. On paper, the premise sounds like a killer idea: Reincarnated warriors locked in a centuries old war work to save humanity. On one side lies the good guys, the infinites. On the other, the nihilists. Here, the nihilist Bathurst (Ejiofor) is searching for a silver egg imbued with the power to end all life, thereby suspending reincarnations. Only one man, Evan McCauley (Wahlberg), has information about the weapon’s whereabouts. He just doesn’t know it yet.

”Infinite,” Ian Shorr and Todd Stein’s adaptation of D. Eric Maikranz’s novel The Reincarnationist Papers, combines elements of “The Old Guard” and “The Matrix,” with a splash of “The Fifth Element.” Unfortunately, the product falls far short of the lofty works from which it draws. Rather than crafting a high-concept science-fiction marvel, Fuqua’s “Infinite” relies on shoddy VFX and ropey world-building for the worst film of his career. (Yes, worse than “King Arthur.” Yes, worse than “Brooklyn’s Finest.”)

From the outset, the filmmaker tries to paint a wide canvas but fails to fashion a detailed visual language. In Mexico City, set during “the last life,” for instance, three infinites are involved in an elaborate car chase. As they wisp and wind down wide, empty streets, in a scene barely stitched together for semi-coherent action, nothing in the costumes, hairstyles, or architecture clues us into what decade we’re inhabiting. Fast-forward to the present “in this life” in New York City and a stream of compositions—a slow-motion bustling Manhattan street bathed in orange sunlight, and cranes reflecting off an office window—read like stock images.

Here, Evan is interviewing for a job at a fancy restaurant, a gig he could easily win if not for his troubled past. Years ago he assaulted a customer after they sexually harassed a waitress. Evan blames the incident on his schizophrenia. See, odd visions and voices often visit him. One moment he’ll dream he’s a Japanese sword maker, and then next, he’ll forge a sword. To keep these apparitions at bay, he takes extra-strength pills, buying them by selling his hand-made weapons to a local drug dealer. Outside of the problematic insinuation of mental health patients as inherently dangerous, Fugua places zero trust in the audience to follow the very basic plot. Rather Wahlberg provides a glorified temp track as the film’s voiceover, wherein with all seriousness he says, “These meds are running out. And once they do—shit gets real.”

Eventually, Evan pops on the respective radar of both Bathurst and the Infinite. Though Ejiofor plays Bathurst as a man warped by his mentally painful life—he just wants to die—that trauma isn’t felt at all.  Ejiofor turns in a perplexing performance that elicits a bevvy of confounding questions rather than providing an actualized character. I couldn’t spot the genesis of his thick, obnoxious accent that borders on Saturday morning cartoon special in its wide specificity. Nor is Bathhurst’s origins comprehensible: Where does his immense wealth come from? Where are the other nihilists?

The Infinites invite similar question marks. A leader in the image of Professor X, the wheelchair-using Garrick (Liz Carr), guides the team. Her top soldiers include the tall, bearded Kovic (Jóhannes Haukur Jóhannesson) and the highly skilled Nora (Sophie Cookson). The team hopes Evan is the reincarnated form of Treadwell, the agent who first hid the egg. In the case of Nora, specifically, she wants to see her former lover again (his spirit is being imprisoned by Bathurst) and believes the egg can bring him back. The character dynamics between this trio and Evan aren’t at all built out. Rather Fuqua is handed this intriguing world but refuses to add contours to these heroes or their powers. The same goes for the group’s researcher played by Toby Jones, and a debaucherous neurologist portrayed by Jason Mantzoukas.

Instead, Fuqua is far more interested in the crafts driving the film. Which wouldn’t be a bad idea if the crafts were anything to write home about: The score thrums at an unmemorable rate. The fight choreography and execution is dreadful. In one scene, it’s excruciatingly clear that stunt doubles filmed an entire hand-to-hand combat sequence rather than Ejiofor and Jóhannesson. In another, wherein Evan and Nora raid Bathurst’s mansion, the editing is an epic mess that's impossible to follow due to poorly articulated compositions. And even if you could follow the onscreen action, you soon wish you couldn’t. Worst yet, the storytelling in “Infinite” never drives the tacky VFX—soldiers are seemingly suspended in air as wood shards shred them to death—and overabundant stunts like an acrobatic confrontation between Evan and Bathurst in the hull of a transport plane.

Without great characters and the aesthetics to match, “Infinite” is a misguided soft toss by Fuqua directed with franchise goals. You get the sense that its unanswered questions, such as the religious component of these powers, is purposely left obscured to cater future films. Instead, the obfuscation totally weakens this movie. In an action-adventure that concerns living multiple lives, don’t waste yours watching “Infinite.” 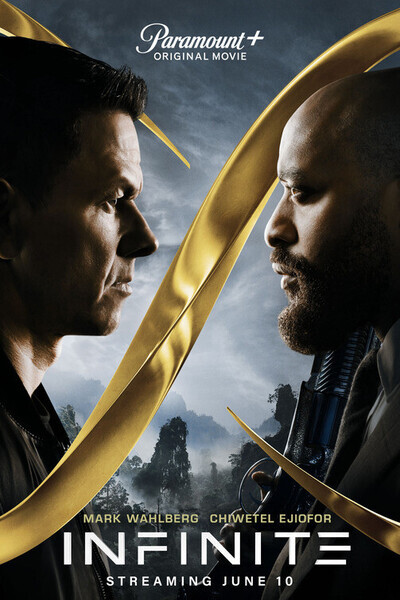 Writer (based on the book "The Reincarnationist Papers" by)