For those of you who were distressed to hear that the remake of “Death Wish” was having its original Thanksgiving release date bumped and despaired that you might have to go through the entire holiday season without seeing a single film in which an ordinary person turns vigilante when the police and the courts fail to provide any sense of justice, “In the Fade” may come as a relief. Sure, this film possesses a better pedigree than most movies of its type—director Fatih Akin is rated higher in international film circles than "Death Wish" remake director Eli Roth, Diane Kruger won the Best Actress prize at Cannes for her performance and the movie is Germany’s entry for this year’s Oscar for Best Foreign Language Film—and its intentions may be nobler, but, at its heart, it is not markedly different from its genre brethren. Alas, it also contains many of the same inherent flaws as most movies of this type, and not even the genuinely good and powerful aspects on display are quite able to overcome the more troublesome elements.

As the film opens, Katja (Kruger) is dropping off her son, Rocco (Rafael Santana), with her Turkish immigrant husband, Nuri (Numan Acar) at the tax consulting firm that they run before going off for a spa date with a pregnant friend. We learn that they two met when she was in college and he was her weed dealer. Eventually, he went to prison for four years on drug charges (the film opens with the cell phone video of their prison wedding) and spent the time studying business in the hopes of making a new life for himself and Katja. Upon release, they opened their firm, catering to the local immigrant population, had Rocco and settled into a happy domestic routine. That routine is shattered forever when Katja returns to the office later on and finds that there has been an explosion and her husband and child are now dead.

While talking to the police, Katja recalls an odd fact—as she was leaving, a young woman left a bicycle untethered outside the building, and when she tried to warn her, the woman walked away insisting she was coming right back. Katja investigates and comes to believe that the bombing was orchestrated by neo-Nazis targeting immigrants. Because of Nuri’s checkered past, the police insist on pursuing the theory that he had gone back into dealing and that the murder was drug-related. Due to the pressures of this wrongheaded inquiry, further exacerbated by family tensions and the unimaginable horror of planning a funeral for a husband and child whose bodies were reduced to pieces, Katja succumbs, first to drugs and then to despair. But just when all seems lost, the bombers are caught and they indeed turn out to be a young neo-Nazi couple (Ulrich Brandhoff and Hanna Hilsdorf). It appears to be an open-and-shut case—the prosecution has the evidence, Katja’s eyewitness account and even the testimony of the father of one of the defendants going for it. It isn’t and the completely broken Katja is determined to get some measure of justice by any possible means.

Whatever one might say in tough-talking Facebook posts, most ordinary people, given the opportunity, might indeed blanch at the notion of taking someone else’s life as an act of revenge, no matter how justified such actions might be. The trick for a movie of this type, at least one that is aspiring to be more than just a simple-minded exploitation film (such as the original Charles Bronson “Death Wish,” a far more complicated work than usually given credit for, especially in comparison to its tacky sequels), is to create a narrative that somehow justifies such actions without completely overdoing it. For a little while during the first section, it seems as if Akin has done just that in the way that he quickly and neatly establishes both the loving bond between Katja and her loved ones during the few moments that we see them together, and the sense of rage, frustration and helplessness that accompanies the wrongheaded police investigation. However, during the middle courtroom section, things grow increasingly unsubtle—the defense attorney (Johannes Krisch) not only employs an outrageous strategy to create doubt about the guilt of his clients (oddly, there seems to be virtually no media interest in the crime or the trial) but looks like the less attractive cousin of Nosferatu to boot—and go completely off the rails during the highly implausible final section.

To be fair to Akin, I do not think for a second that he was trying to make a straightforward eye-for-an-eye revenge drama. Indeed, there are hints throughout that he had more on his mind in telling this particular story. The end credits, for example, offer a number of disturbing statistics regarding the rise of nationalistic hate crimes in Germany in recent years that suggest that the subject is something that means a great deal to him. The film also tries to starkly illustrate notion that the real victims of terrorisms are not the dead but the survivors who find their love and grief curdling into the kind of hate that can inspire the same kind of violence that took the lives of their loved ones. Unfortunately, this aspect is gradually undercut as the film gets broader in its tone to the point where Akin himself essentially does the same thing to Katja that the neo-Nazis have done by robbing her of her humanity and transforming her into a mindless pawn.

And yet, while “In the Fade” is ultimately too muddled, it does contain a number of elements that are worthy of consideration. The filmmaking itself is crisp, stylish and packs a lot of detail into even the briefest of moments. There are several scenes that are striking on an individual basis—Katja regarding the splatter of blood on one of the walls of the bombed-out office; a visually extraordinary sequence set around Katja taking a potentially fateful bath; a brief but powerful conversation during a cigarette break between two people brought together by unspeakable circumstances. Most of all, it contains a powerful, deeply felt performance by Kruger that is both the best thing that she has ever done in a film and worthy of all the accolades that it has received—even during the ludicrous final section, she keeps things from totally spinning out of control. I just wish that these moments and efforts had gone into the service of a movie that was ultimately worthier of receiving them. 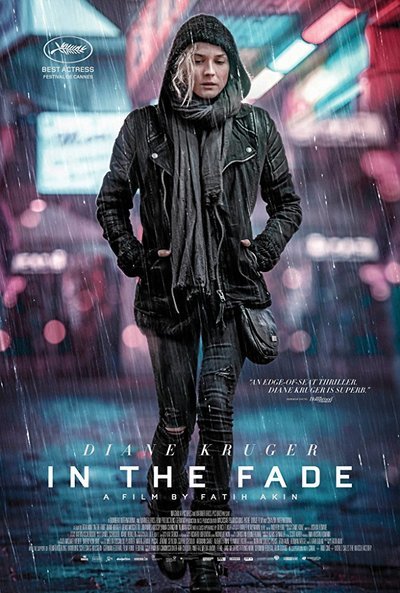 Rated R for some disturbing images, drug use, and language including sexual references.