I have not read "Thérèse Raquin," the 1867 Emile Zola novel upon which "In Secret" is based. A little research revealed that Zola's serialized story of adultery, murder and marriages, both arranged and desired, has been adapted numerous times. "Thérèse Raquin" has been remade as a German silent film, TV movies in Belgium, Italy, Sweden, Germany and the UK, a BBC radio play and an opera. French director Marcel Carné cast Simone Signoret in his 1953 film version, and Park Chan-wook worked several plot elements into his 2009 vampire movie, "Thirst."

A little research also revealed that the ripest plot elements of "In Secret" come straight from its source. This explains the TV movies, the opera and the vampires, all of which thrive when fed a good, soapy, trashy story. I enjoy being fed one, too. "In Secret" was roundly panned when it played at last year's Toronto Film Festival, but to paraphrase and reverse Shakespeare's Marc Antony, I have come to praise it, not to bury it.

Director Charlie Stratton wraps his adaptation in the appropriate period dress of Zola's era. In 19th century France, Madame Raquin (Jessica Lange) is visited by her brother, who leaves young Thérèse (Lily Laight) in her charge. Madame puts Thérèse to work taking care of Madame's heir, Camille. Camille is a sickly boy whose coughing keeps Thérèse awake in the bed they share; she pulls the bedcovers over her head in frustration. Courtesy of the film's editor, when Thérèse pulls the bed covers down, she has morphed into Elizabeth Olsen.

Now 21, Thérèse is forced by Madame into an arranged marriage with her first cousin. Camille (Tom Felton) moves Mom and wife to Paris, where he starts his career and meets up with an old family friend named Laurent (Oscar Isaac). To support Camille, Madame and Thérèse open up the gloomiest looking shop in town. It's designed and lit like a mausoleum, and though people come and go, I don't recall seeing anyone buy anything.

More important activities happen upstairs in the living quarters anyway. There, Madame plays dominoes with her wards and fellow members of her class. Her contemporaries talk of the most morbid of subjects, including the foreshadowing topics of scandalous murder and the gruesome aftermath one witnesses at the morgue. Soon, Madame's wards will also become knowledgeable of the contents of the local morgue: Camille makes the fatal mistake of bringing Laurent to visit one evening.

Camille may be French, but his skills dans le boudoir are far from ooh-la-la. So when the sexually frustrated Thérèse takes one look at the dark haired, brooding Laurent, her libido starts doing the Can-Can. Immediately, she and Laurent begin an affair. Their lunchtime trysts occur above the shop, right under the nose of Madame, but go undetected. (Have you not ears, woman?!) Unlike in the pulpiest fiction, these nooners seem more a cynical matter of convenience than an all-consuming passion—Thérèse is horny and Laurent can no longer afford the brothel. Camille, of course, is completely unaware of his betrayal, at least until he winds up at the bottom of the river.

Stratton wisely withholds the murder at first, cutting directly to the agonized cries of the murderers pretending to be upset at the "accidental" death. For a time, we're left to ponder who did the killing and how it transpired. When Camille's body is finally pulled from his watery grave and delivered to the morgue, Laurent discovers it's just as gross as Madame's domino buddies described. Thus begins his downfall.

With Camille out of the picture, the lovers try to figure out how to get together publicly without arousing suspicion. "In Secret" finds an unpredictable way around this by playing up the cluelessness of Madame's domino buddies. They misread everything by filtering the obvious through a prism of societal sexism and individual idiocy. This has a major payoff later. For now, their obliviousness is hilarious: "Thérèse has been sick with grief! She must need another husband! Now whom can she marry? Ah yes, Laurent!"

So far, we have the noir element of lovers who kill to be together. "In Secret" now adds the juicy, soap opera components. The film becomes haunted by Camille's ghost, which the guilty see in their grisly dreams and Madame literally sees the moment before she experiences a life-changing event. Thérèse and Laurent turn on each other; their guilt becomes a bucket of ice water on their sex-based relationship. Thanks to the marriage, neither can leave, so they each consider killing the other. "Body Heat" has now become "War of the Roses." With ghosts.

The actors approach this material with varying degrees of success. Isaac is a better in his early scenes as a seducer, Olsen is better in her bitter, angry later scenes, but they synch up by the film's over-the-top last moments. Felton is suitably foppish and dopey. Shirley Henderson plays the hell out of a scene that seems inspired by "The Shining."

None of them, however, can match Jessica Lange. Those years on "American Horror Story" have convinced me that Lange can bring credibility to the most ridiculous plot twists. Somehow, she finds the perfect line of lunacy to tow, which "In Secret" requires for her character's arc. She goes from villainous to victimized to vengeful, stopping along the way for what I'll simply describe as an extremely important game of charades. The plot forces a late-movie restriction on her performance, and her handling of it made me want to throw roses at the diva onscreen.

"In Secret" is a costume drama with a gigantic accent on the drama. It's my kind of crazy, and I was quite entertained. To borrow again from Shakespeare, "'Tis Madness, but there's method to't." 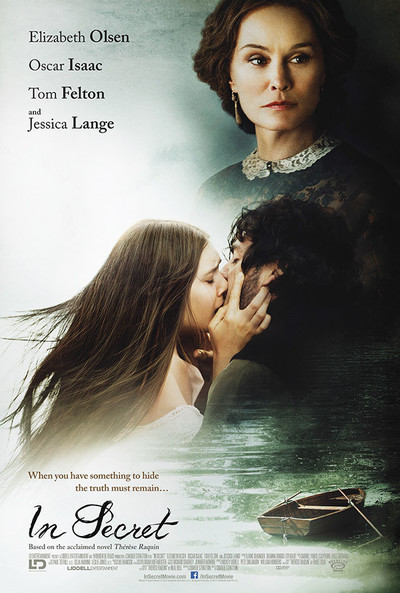