A sporadically deft but not entirely successful exercise in horror movie minimalism, "In Fear" takes a small task and a hooky premise and runs with them, providing some good jolts over the course of its barely-90-minute length. Writer/director Jeremy Lovering puts his two main characters Tom and Lucy (Iain De Caestecker and Alice Englert) into a situation that their relative newness to each other has not prepared them for. Their eventual inability to entirely trust each other ratchets up the immediate tension, but the emotional fallout from the movie was, for me, more underwhelming than intended.

Tom and Lucy have been acquainted/dating for a couple of weeks when they take off in Tom's compact auto to attend an outdoor music festival in the British countryside. Tom's arranged a surprise for Lucy en route, an evening at a rustic hotel. Only once he starts following the signs to the place, they discover that they're never ending up at their supposed destination. They start, they stop, they get out of the car. As it starts to get dark they see darting human figures. A tree falls, nearly crushing the car. Something seems to be after them. But what?

Eventually they do come upon another person, and the storyline ratchets things up appropriately. But while Lovering does use his constrained-by-design spaces (maybe 60 to 70 percent of the movie happens in the interior of the car) with commendable competence, the direction here is largely nothing new. During periods that weren't drawing me to the edge of my seat, I was thinking, "This thing is kind of like what "Knife In The Water" might have been like had the central couple not been able to get to the boat." And while I try not to be the sort of viewer who second-guesses the choices of a movie's characters, this picture does contain quite a few "Why the hell are you getting out of the car, dummy?" moments, which tend to inhibit willing identification with the protagonists.

Then there are the specific mechanics of the plot, which struck me simultaneously as perversely murky and overstated. The movie begins with Lucy in the toilet of a pub, looking at a rather portentous piece of graffiti: "If a man hurts an innocent person, the evil will fall back upon him and the fool will be destroyed." Even if this was not a bathroom stall, that's all kinds of overwriting. Nitpick-inspiring bits like that keep turning up, which tend to detract from those sequences in which Lovering's audience manipulation works like a charm. Helping in this aspect are the two leads, and final cast member Allen Leach, who all contribute committed, unaffected performances, while cinematographer David Katznelson keeps the action coherent even in the dark. A good ride for the most part, but not much more than a ride; still, genre fans will be keeping their eye out for whatever Lovering does next, with good reason. 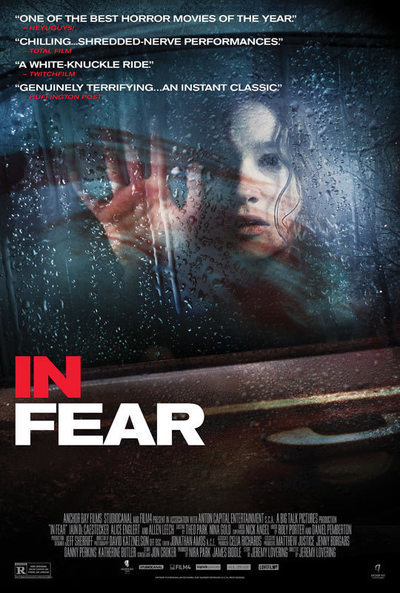