Watching “In Between,” about a trio of young Palestinian women in Tel Aviv trying to shape their own destinies despite being part of a conservative society entrenched in patriarchy, I realized the sisterhood created by Arab-Israeli filmmaker Maysaloun Hamoud, making her feature debut, was partly indebted to Hollywood’s gaggle-of-girls genre. Think “Three Coins in the Fountain,” “Where the Boys Are,“ “Sex and the City” and even hints of “9 to 5” and “Thelma and Louise.”

Yes, there are English subtitles onscreen, but the actions of these roommates easily translate into a familiar pattern, one that I have always found to be irresistible: Three or four single women with distinctive personalities—an extrovert, a goody-goody, an arty type, etc.—share their intertwined lives. Usually, one suffers a tragic incident of sorts that causes their bond to grow stronger.

What elevates Hamoud’s screenplay beyond typical Tinseltown fare, however, is what is at stake by rebelling against cultural norms and choosing a liberal lifestyle—namely, bringing shame to your loved ones and being ostracized by your community. Then there are three vibrant lead actresses, who are beautiful without any Max Factor-like artifice to soften their natural edges. They feel as if they are at one with their apartment-sharing characters, ladies who could actually exist on this planet instead of only in the glossy pages of fashion magazines.

Hamoud also goes out of her way to portray the underground night life in a contemporary though still ethnic way. The soundtrack features a catchy, pulsating strain of exotic electronica and the cinematography by Itai Gross does much to contrast the day and night, business and pleasure and metropolitan and small-town differences of the lifestyles portrayed.

The hard-partying sultry spitfire is Laila (Mouna Hawa, a willowy riveting presence)—whose wild explosion of curls nearly outdoes Diana Ross’ mushroom cloud in “Mahogany”—who we first see dancing, drugging and drinking the night away with a gal friend who is about to wed and a bunch of male pals, including a gay man. Later, we learn she is a respected criminal lawyer when she isn’t clubbing, and pickier about the men she chooses to become intimate with than she might seem. When she seemingly stumbles into a Mr. Right, Laila learns the hard way that he has more than a few wrongs.

Then there is tattooed, nose-ring-sporting DJ Salma (Sana Jammelieh), a laid-back bohemian and closeted lesbian who plays along with her Christian family’s attempt to set her up with a male mate.  When her boss at her day job in a restaurant kitchen objects to workers speaking Arabic because “it makes the customers uncomfortable,” Salma quits and ends up bartending. That leads to a romantic connection with a patron who’s a medical intern and much verbal rebuke by her disapproving parents when they finally catch on.

Nour (Shaden Kanboura), a devout and naïve Muslim computer-science major whose hijab can’t obscure her sweet features and chubby cheeks, makes three. Initially, Laila and Salma mock how she clings to the traditions of her sheltered life and allows her demanding hyper-religious fiancé to call the shots. But they soon find commonalities and will stand by her when Nour is forced into a terrible situation.

At this point, “In Between” briefly threatens to become a revenge thriller as the trio team up to trick the perpetrator. But the punishment turns out to be more one of humiliation than anything else. By now, it is clear that men don’t exactly come off like paragons in this story, although Hamoud, to her credit, realistically allows one father to stand up for his daughter’s choices and movingly defend her honor. But given the recent barrage of sexual abuse allegations and general mistreatment of women, this tale of female independence is in some ways the #MeToo movement personified.

Beyond their gender, however, the threesome also has to deal with being Arabs in Israel’s second-largest city—an awkward situation defined by the film’s title. When Laila and Salma check out dresses at a boutique, they are treated brusquely by a clerk when they ask where the fitting rooms are—leading Salma to say, “We don’t bite.” What is most intriguing about “In Between” is how each woman is allowed to make mistakes and learn from them without any judgment on Hamoud’s part. Not all is perfect by the time the end credits roll. But progress on a small scale has been made and respect to each is granted.

On a side note, which might particularly tickle and impress fans of “Curb Your Enthusiasm,” an actual fatwa was issued against Hamoud—the first against a Palestinian in 70 years—for her depictions of homosexuality, intoxication and drug use. That—combined with no less than Isabelle Huppert declaring the women featured in “In Between” as “heroines of our time” while presenting an award at Cannes last year—is as good a recommendation you can get. 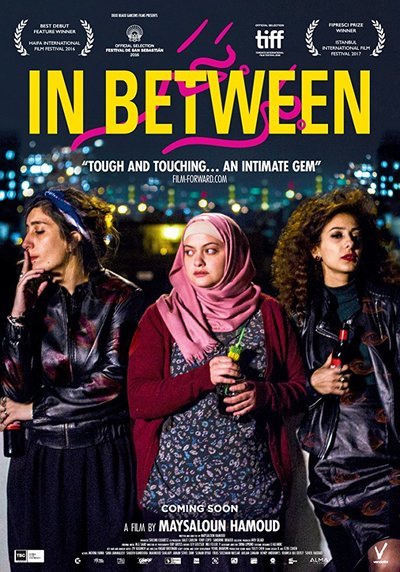