Real science takes as much of a beating as Scrat, everyone’s favorite sado-masochistic rodent, in “Ice Age: Collision Course.” So much so, the filmmakers behind this fifth character-jammed and decidedly jumbled outing in the glacial animated franchise felt the need to recruit astrophysicist Neil deGrasse Tyson (both as a narrator and in weasel guise, complete with his trademark corona of hair, soulful Teddy-bear eyes and facial fuzz) to explain how our solar system came into existence.

We are told there is a “dumber” reason than is usually believed, and that is where a certain calamity-prone squirrel rat comes in. Scrat wordlessly ping-pongs about the galaxy like a bushy-tailed, fang-toothed version of Sandra Bullock in “Gravity” after his ever-elusive acorn causes him to catapult into outer space aboard an alien craft. As a result, the planets collide into one another like billiard balls while he leaves a trail of cosmic chaos in his frantic wake while once more engaging in his Sisyphean pursuit of his precious nut.

As is often the case with the “Ice Age” movies, the jittery furball mascot of Blue Sky Studios who recalls such physically adroit silent stars of yore as Buster Keaton and Harold Lloyd as if directed by Tex Avery continues to be the highlight of these comical returns to the prehistoric era. He is a constant who never gives up, never learns and never achieves his goal. And the animators continue to take perverse delight in concocting new inventive ways to torture him, even giving his acorn a bit more anthropomorphic presence than usual.

This time, Scrat is also the catalyst for the rest of the tale by inadvertently causing a gargantuan flaming asteroid to hurtle towards Earth that could possibly destroy the entire world. But that catastrophe is put on the back burner for a while as the members of the series’ so-called Herd put in their appearances. Ray Romano once again morosely mumbles his way through the mammalian antics as Manny the woolly mammoth. His current dilemma is as old as time itself, or at least TV’s first family sitcom: He doesn’t think his happy-go-lucky son-in-law-to-be, Julian (Adam Devine), is good enough for daughter Peaches (Keke Palmer).

As for Sid the sloth, whose sloppy lisp is one again provided by John Leguizamo, he is heartbroken after Francine (Melissa Rauch), his Jersey Girl crush, rejects his marriage proposal—one that arrives just 14 minutes into their first date. She adds insult to injury by noting, “You look nothing like your profile pic-sha.” Meanwhile, Denis Leary and Jennifer Lopez are granted the lamest storyline as sabre-tooth tiger Diego and mate Shira fret that they might not be able to have children since their fierce appearance tends to scare kids. Really? Wouldn’t their spawn be equally frightening?

Clearly, the makers of the “Ice Age” series are running out of ideas for the main trio. They have to maintain the resonating, heartfelt premise—you don’t have to be related or even the same species to be a family—that is primarily responsible for the previous four flicks grossing an astonishing $2.8 billion worldwide total. But “Collision Course” attempts to solve its sequel fatigue by giving more screen time to side characters from previous chapters and promoting Brit wit Simon Pegg’s hyperactive one-eyed swashbuckling weasel Buck into a breakout status, as he and a trio of nefarious flying dinosaurs escape from the lost world featured in the third “Ice Age” film.

Not only does Buck come bearing an ancient, carved column that holds the key to halting the asteroid, but he pulls a Kate McKinnon here in the weirdness department. The impish Ghostbuster is probably kicking herself that she never thought of toting a pet pumpkin around in a Baby Bjorn or launching into Figaro’s aria from “The Barber of Seville” in a robust performance worthy of pint-size Pavarotti.

Other distractions that offer varying levels of amusement arrive in the form of goofy opossums Crash and Eddie (Seann William Scott and Josh Peck), the type who giggle when they say the word “duty,” and Sid’s feisty Granny (Wanda Sykes), who is given to such observations as, “That plan is so dumb I wish it had a face so I could smack it!”

But what appears to be an anything-goes philosophy when it comes to the narrative suddenly takes a turn at the cross section of Incense and Peppermints when we arrive in Geotopia, a hippie-dippy domain of perpetual youth maintained by the presence of magic crystals, which are the key to stopping the asteroid. Probably the weirdest conception is the Shangri Llama (Jesse Tyler Ferguson—apparently, there now is a law that at least one major cast member from “Modern Family” is required to be a voice in every animated film this summer), the spiritual leader of this tribe of yoga enthusiasts who exhibits the spitting prowess of a major league pitcher as he presides over his tribe.

Don’t be distracted by the eye-pleasing purple and lavender hues that have been added to the typically chilly color palette. This plot is as disjointed as it sounds. You’ve got Scrat as a reluctant astronaut, a pending wedding, a possible apocalyptic disaster, visitors from another prehistoric era and ‘60s-style flower children. It’s almost as if the writers were simply using ideas left over from other “Ice Age” scripts that are about as fresh as the wind beneath Sid’s fleas, to quote one of the sloth’s pickup lines. It also is a signal that the concept’s extinction date is about to expire, but I hope Scrat never ends his impossible quest to possess his acorn, whether in another format or just in my imagination. 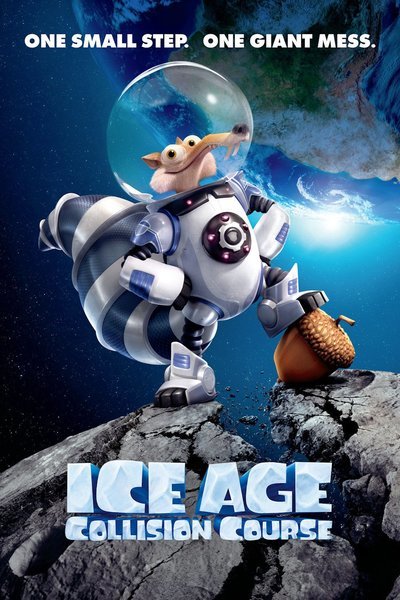 Rated PG for mild rude humor and some action/peril.