No one really knows what comes after death. We have theories, and beliefs, and hopes, and prayers, but—we don’t know. That uncertainty is a kind of veil, one that you pass through in your final moments, and there is one way forward. The oppositional hope and fear inspired by the possibility that someone might find a way back are the frames of every ghost story, and they give shape to the unassuming and evocative “I Was A Simple Man.”

Director Christopher Makoto Yogi’s lyrical, entrancing film, set in his home of Hawaii, is simultaneously tethered to linear time and floating outside of it. What if we were to walk on this Earth alongside our younger selves? What if we experienced all our memories at the same time? What if we knew our future before it happened, and does that future become compromised if we choose to pursue it anyway? These are experimental concepts that Yogi approaches straightforwardly, with only a few sparse bursts of aggrandizing tension, before incorporating their strangeness into the world. That pragmatism makes for a series of haunting images that highlight the beauty of our natural world and the trespass of our forms upon it. A ghost walks deliberately through the circle of salt meant to keep it out. A woman tumbles backward into a memory sparked by the rediscovery of an old dress. A man climbs into a bed in the middle of a jungle, the white and orange bedding a contrast with the surrounding verdant green. Eunsoo Cho’s precise compositions are complemented with a pair of synchronous performances from Steve Iwamoto and Constance Wu, each of them testing the limits of stillness.

In his first starring role in a feature film, Iwamoto brings naturalism, which should not be mistaken with tranquility. He plays protagonist Masao Matsuyoshi as a man who has compartmentalized so many elements of his life—his children, his friendships, his health—that he’s divided himself up too, separating parts until he’s effectively little more than a physical shell. Meanwhile, Wu, whose persona has always had a hard edge, uses that rigidity to her benefit as a woman unbothered by the boundaries of natural life. Her character is opaque right until the moment that she isn’t, and the clarity that Yogi applies to her motivations is simultaneously deeply compelling and deeply sad.

“I Was A Simple Man” begins in the present day, with a Honolulu transformed into the playground of the rich: mile-high skyscrapers, towers of gleaming metal and reflective glass, construction sounds omnipresent in the distance. Yogi frames two men in a window as they overlook the shiny new view, and then pushes us forward until we’re in line with, and then past, their perspective. We stand before all this progress, and we see its duality: change in one way, and destruction in another. But once something has been set in motion, it can be nearly impossible to rewind it back. These buildings can’t disappear. The land can’t be unsold. Hawaii’s statehood can’t be revoked. And the years that Masao has spent ruining his body with alcohol and cigarettes can’t be erased.

Masao is dying, and he needs someone to be with him in his last days. Who can help? His son Mark (Nelson Lee) struggles with mental illness. His daughter Kati (Chanel Akiko Hirai) resents the years her father spent estranged from them. His other son Henry is just a voice on a phone, hundreds of miles and six hours away. His grandson Gavin (Kanoa Goo) is unnerved by the irreversibility of what’s happening to Masao. In all of this—his going to the doctor, his family coming to him—Masao seems strangely aimless, and strangely resigned. His wedding ring grows loose on his aging fingers. Beer bottles and cigarettes clutter his home. He lights incense each night at his living room altar, which holds pictures of his parents and his wife, and he puts a small ceramic bowl overhead to capture the rain dripping in from a leak. How did he get to this place, and to this point?

As “I Was A Simple Man” then begins to move backward and sideways through time, the film becomes a sort of kaleidoscopic hybrid of realism and fantasy. (It would make a good mini festival with a couple of other thematically similar 2021 films: “The Fever” and “Mogul Mowgli.”) Masao’s and Kati’s memories of Grace (Wu), their wife and mother, respectively, are one track. Masao’s further-back remembrances of pre-World War II Hawaii, all dense jungle, dirt roads, and undeveloped beaches, flood the screen with color and light. They contrast with Gavin’s wanderings around the working-class neighborhoods of present-day Honolulu, the graffiti, skateparks, and mom-and-pop stores of which add yet another layer. Masao exists in all of these places, and so Yogi crafts not only a portrait of this man in this place, but this place in this man. How does living through so much change alter one’s insides, too? What becomes absorbed, and what is exuded?

A rotting mango falls off a tree. Waves crash upon the sand. An eclipse floods the beach in eerie red light. We fade from Masao’s face to Grace’s, Grace’s back to Masao’s, and then to blackness and blankness. “All these memories coming back,” Kati says, but did they ever really leave? In “The Devil’s Backbone,” one of Guillermo del Toro’s many masterpieces, a character wonders, “What is a ghost? A tragedy condemned to repeat itself time and again? A moment of pain, perhaps. Something dead which still seems to be alive. An emotion suspended in time.” “I Was A Simple Man” takes that idea and stretches it out into a 100-minute spell of beauty and melancholy, intimate and grand in equal measure, a film that derives its power from the universality of its final destination and the relatability of the pain, love, and regret that pave the guiding road.

Now playing as part of a one-week exclusive engagement at the Metrograph in New York City. 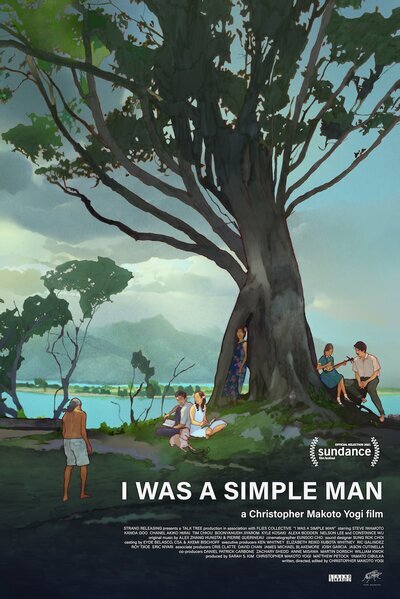