In the opening scene of this movie, a teenage girl walks around in a gray-blue forest, seeking something. She finds it—a clump of mushrooms growing at the foot of a thick tree. She gets out a pocket knife and scrapes some of the green mold off of its top. Uh-oh—have the children of America been watching “Phantom Thread” and adopting its heroine’s stratagems? Of course not. After putting the red mold into a plastic bottle filled with red liquid, she puts in a Gummi Bear as well. This concoction, we soon learn, is “Giant Bait.”

Barbara (Madison Wolfe), the teen girl and the heroine of this movie, adapted from a 2008 comic book that was subsequently anthologized into a graphic novel, lives in a house crowded by obnoxious videogame obsessed brothers and presided over by older sister Karen (Imogen Poots) at first registers to viewers as a particularly avid devotee of D&D-style role-playing games. Although she’s not particularly keen on sharing her enthusiasms. Approached on a nearby beach by Sophia (Sydney Wade), a transplant from Leeds, England, Barbara pays back curiosity with rudeness before allowing that Sophia has a pretty name.

But Barbara is more than an analog gamer: when she insists that her life’s work is killing giants, she’s not talking about a persona that she adopts in leisure time. The rabbit ears that she wears as a kind of crown do not constitute a fashion statement. She really believes that the ratty purse she clutches to herself as she navigates, or fails to navigate, the banal troubles waiting around the corner of every school corridor, actually contains a giant-smiting storm hammer.

Why is this? A sympathetic school psychologist, new to the gig, Mrs. Mollé, is making it her job to find out. And of course Sophia is curious too. And Karen, who’s running the family for reasons we don’t get until about two-thirds into the movie, will get beyond exasperated before Barbara stops acting out.

In the meantime, the giants appear to both Barbara and the audience. They are somewhat formidable but also a tad familiar. The same could be said for the movie itself. “I Kill Giants” is the feature debut of Anders Walter, who has a reasonably deft hand with both fantastic and realistic elements, although for the latter he tends to steep his frame in gray to the extent that it weakens his climactic sequence, which, of course, takes place during a seaside thunderstorm of immense ferocity. (The town in which Barbara and family live is never named, although a radio report late in the film locates the storm’s vicinity as “Long Island.”) The source material of this movie pre-dates the novel on which the recent picture “A Monster Calls” is based, and the similarities between the two storylines are expanded upon what I’ve already revealed as the movie progresses. That the perspective this time is from a girl’s point of view rather than a boy’s is significant. At least it is in theory. The scripter is Joe Kelly, who, along with J.M. Ken Nimura, created the comic. It’s not a knock to note that the main creative talents behind the camera are male—the women of the cast are clearly imbuing their characterizations with what they know. But there’s still something about “I Kill Giants” that feels projected, a work more informed by empathy than experience. 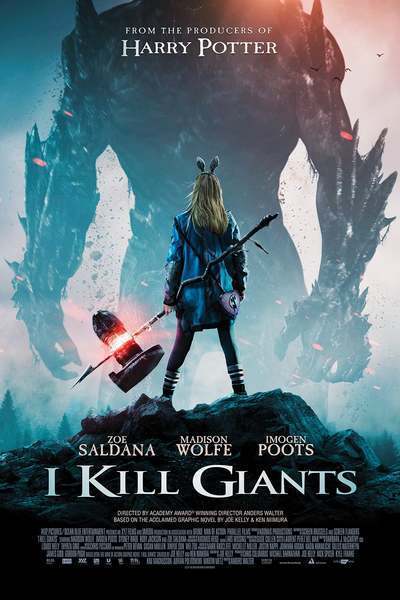