Is American ready for a feel-good movie about a toxic, conservative talk show host who learns to listen? Maybe, but Frank Coraci’s “Hot Air” is too shallow, sloppy, and unfunny to lead the cause, basing itself off the nation’s divisiveness as if it were a wistful set-up for ideological kumbaya, all while being afraid of starting a tough—and true—conversation.

Steve Coogan plays Lionel Macomb, a Glenn Beck, Joe Walsh-type who has an angry fanbase that tune in for his nastiness. He’s not afraid to be a bully when reading the news about a senator he doesn't like (as with Judith Light's Judith Montefiore-Salters), and he cuts callers off in the middle of heated exchanges—after getting the last zinger in. Within his own bubble, he approaches debates like a boxing match, where he’s both fighter and referee. Macomb's a mean entertainer, and is sharp enough to know how to stoke up his audience, especially when it comes to issues about people who supposedly take advantage of the system—like the lower-class, or immigrants.

Will Reichel’s script slowly reveals why Macomb is so grotesque—he has massive family issues relating to his mother and estranged sister. But instead of going to therapy, he has weaponized his ability for zinger, and created an echo chamber where he doesn’t need to address his own problems, or worry about who might be influenced by his vitriol.

He’s already a tough character to embrace as as a right-wing Scrooge, but treating his ugly beliefs as a mutation from his personal problems is a gross simplification. You get a sense that he’s doing this for narcissism and for his business; that if he could make more money telling liberals what they wanted to hear, he’d do that too. If only he were to address that buried pain, could he have a change of heart. But people are more stubborn and complicated than that, and the story's overall plan of showing his lighter side registers as especially false.

The lazy mechanics for this feel-good story kick-off once his niece Tess (Taylor Russell) shows up at his swanky NYC penthouse, and claims her relation to him, while telling him that her mother is in rehab. Persuaded by his girlfriend and PR manager Valerie (Neve Campbell) to not kick her out (or sign an NDA agreement), the unamused Lionel becomes a type of curmudgeonly father figure to the considerably less conservative Tess, who soon witnesses firsthand the phoniness of his world, and that he doesn’t let people talk.

Tess enters the picture as the type of bandaid Lionel has needed all of his life, and much of Taylor Russell’s spirited performance concerns trying to help him face the past, holding out hope that he and her mother can find a type of peace. Russell isn’t given much, even as a type of comic relief from the stressful world of Macomb. But she does help push the stagnant emotions along with blunt dialogue like, “Why are you still so angry, Lionel? Why can’t you just let it go?”, which sends the movie off on its next woe-is-Lionel passage.

Buried within the mush is a heated Coogan performance that perhaps at one point could have been memorable. During a show hosted by his arch rival Gareth Whitley (Skylar Astin), Lionel gives a quarter-baked “Network”-like rant where he goes off the cuff in front of the cameras, transforming from the voice of the conservative to a tacky cynic about all of culture. As Coraci mercilessly chops up the speech, Coogan rails against easy targets like screen culture (there’s not one but two disses) and fixations on fake idols such as himself. It’s a bland damnation that’s fitting for the soft-edges of this movie, which errs toward bipartisan crankiness.

But Coraci knows that if leaned into too much Fox News rhetoric, the film would be even more of a lost cause than it nonetheless is. We don’t see Lionel get too brash, or really push any buttons. This gives “Hot Air” the problems of other movies inspired by our daily tensions—it's afraid to pick a side and humanize it. Like how the recent “Long Shot” told of a political campaign and never revealed the character’s political party, this one plays to both sides by having Lionel rip on President Trump and Hillary Clinton, carefully making Macomb the carefully platonic image of a recognizable conservative.

It’s not a bold statement to say that it feels like we're in a post-debate era: people don't hop into Twitter threads or comment sections to be convinced, they just want to win. “Hot Air” has a merely cute sentiment for us that doesn’t stand up against reality, especially when the subjects have become so extreme that they readily concern life and death (guns, abortions, immigration, Trump, etc.). However hopeful “Hot Air” is, its phoniness makes the prospect of an open-minded debate feel even more like a fantasy. 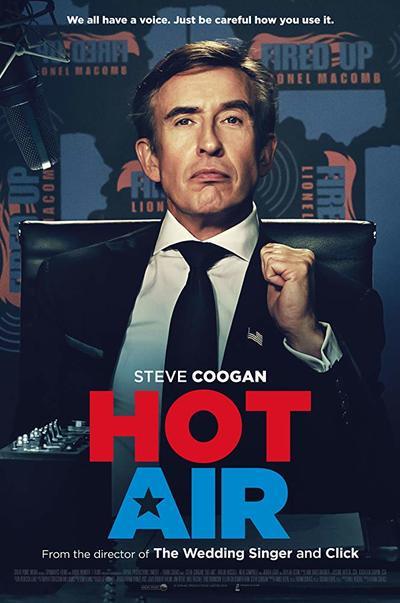