If you have ever found yourself idly speculating what might occur if Sofia Coppola—one of the most intriguing filmmakers of our time—were suddenly robbed of all her prodigious artistic gifts and then hired to make a dumb knockoff of the already-execrable "Unfriended," then "#Horror" is the movie for you. As for everyone else—and I am guessing that covers practically every sane and sentient moviegoer out there—it will prove to be nothing more than a nightmarishly awful blend of mad slasher nonsense, social satire and After School Special that offers nothing of value in the way of humor, scares or insight. It may have the lofty goal of illustrating how pre-adolescent cruelty in the cyber-era can jump from the screen to real life in horrible ways, but the end result is so bad that when the infamous Slender Man is referenced briefly at one point, I felt sorry to have his comparatively good name tarnished by its inclusion.

Set almost entirely within the confines of a lavish luxury home seemingly built almost entirely of glass in a tony Connecticut suburb, "#Horror" is centered around something that should certainly send chills down the spines of most normal people—a slumber party involving six media-obsessed 12-year-old girls, most of whom appear to be vying for the role of the group's resident Mean Girl: There is Sofia (Bridget McGarry), who lives in the house with her rich parents (Balthazar Getty and Chloë Sevigny) and who is an all-around monster; Francesca (Mina Sundwall), who the others suspect is an incipient lesbian; Georgie (Emma Adler), who sublimates all of her feelings through food, and Ava (Blue Lindberg), whose single distinguishing trait currently eludes me; Sam (Sadie Seelert), who is always being teased by the others because her family is not rich. And lastly, there's Cat (Haley Murphy), who is still reeling from psychological problems brought on by her mother's death and has gotten trouble previously for bullying others.

After the usual amount of giggling, trying on clothes and endless posting selfies online, Sofia's mother goes out to a 12-step meeting and leaves them alone for a couple of hours. No sooner has she left than the girls start turning on each other with the kind of cruelty that they usually save for the Internet and before long, Cat is kicked out. She responds with mean online postings and eventually Sofia locks up all their phones for the night to bring the cyber-bullying to an end. At this point, however, it becomes apparent someone is out there in the woods—who we already saw murder Sofia's father and his mistress—hell-bent on killing the little brats and posting their gory demises online. Is it Cat? Is it Cat's father (Timothy Hutton), a decidedly unstable type who receives a call from his distressed daughter, and arrives to scream at the girls while threatening them with a knife? Is it the spirit of Ray Jameson, the famous artist and contemporary of Warhol who used to live in the house decades earlier until he went nuts during a party and killed six people before allegedly committing suicide? Is it Jameson himself—after all, they never found the body?

Not that anyone watching "#Horror" is likely to care in the slightest about who is doing the killing and who will survive. The film was written and directed by Tara Subkoff, a noted fashion designer and actress making her debut behind the camera—yes, Sofia Coppola started her directorial career in much the same way, but I assure you that this is where comparisons between the two end. The screenplay is a godawful mess in which none of the characters generate anything in the way of audience interest—not even the ones meant to be slightly more sympathetic—and then Subkoff forces us to watch as they endlessly snipe at each other. The storyline is painfully thin and filled with plot elements (like the psycho artist story) that are nothing more than obvious red herrings. Subkoff tries to compensate for the trite writing with fancy visuals (including irritating animations that pop up whenever someone posts online) that are more annoying than anything else. As for the acting, none of the young girls make much of an impression, while the more recognizable faces all seem as if they are doing favors for a friend, as they invest the littlest of their talents as possible.

More troubling is that it is never clear whether Subkoff means this film to be a legitimate expose of the horrors of cyber-bullying, or a satire of media-obsessed youth so focused on their cellphones and "likes" that they do not even notice when they are systematically being bumped off literally instead of metaphorically. As serious drama, it is a total failure that offers insights that would have seemed shallow and dated back in the Atari era—there is a scene in which the girls all blame their parents for their troubles that seems straight out of a lesser John Hughes film. "#Horror" subverts its own message about a culture that is willing to say the most horrible things to each other  (thanks to the cloak of anonymity provided by the Internet) by having the girls hurls those very same insults face-to-face. As satire, it is so pointless and scatter-shot that it only serves to remind viewers of the old maxim about how satire is the thing that closes on Saturday night—or four-walls a couple of theaters for a week or so, as is more likely the case here—and whatever satirical point there might have been gets lost completely once we start watching 12-year-old girls getting their throats slit, however much you may be rooting for it by that point. For those keeping score, the two funniest lines to be had in the whole thing—and these may not quite work out of context—are "Your mom slept with Hitler" and "Guys—let's go touch all the art!"

Ah, the art. As it turns out, Sofia's house is jam-packed with dozens of pieces of modern art by some of the biggest names in the field today—there are more artists listed in the opening credits than there are actors, in fact. There are creepy masks, a portrait of half of a hard-boiled egg that appears to pulsate at certain times and then there is some weird stuff as well. Watching "#Horror," all I could think of was the moment in the movie "Afterglow" where Nick Nolte looked at a weird piece of art and remarked, "I don't know what I like, but I know what art is." Trust me, this film isn't that by a long shot. 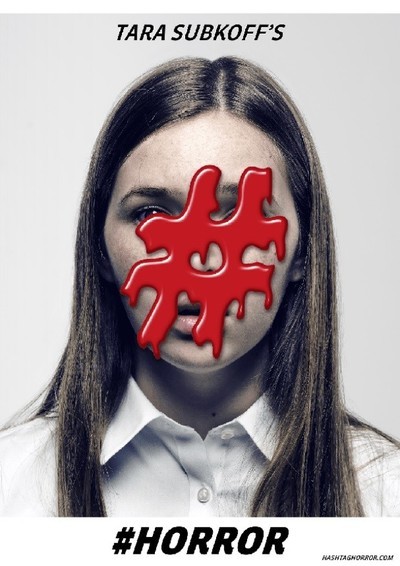