Usually there is nothing wrong with indulgent escapism as a cinematic commodity. But it’s probably more than a little tone deaf right now to trot out to see a cream-puffy Hollywood rom-com fantasy involving coddled well-off people. Consider that one of the bigger setbacks faced by at least three characters at some point in “Home Again” is that they choose to eat cold leftover lasagna straight out of the same red Le Creuset pan. Oh, the humanity.

After observing thousands of Houstonians forced out of their own now-demolished homes by a devastating flood and their self-sacrificing rescuers, I found myself from the get-go having difficulty summoning much sympathy for Reese Witherspoon’s Alice, a newly separated mother of two who we first meet as she sobs in her bathroom on her 40th birthday. Her New York City-based music-biz husband (Michael Sheen) apparently refused to give up on the hard-partying lifestyle that such a profession requires. So she and her sitcom-sassy grade-school daughters have moved back to Los Angeles, where her ex-actress mother (Candice Bergen, the only cast member who is able to ring much zing from her semi-comedic lines) and a ready-made network of giddy gal pals applaud her return.

Not that Alice has problems finding a new home since she inherited a vintage spread from her late Oscar-winning director-father, a revered ‘70s icon, as well as a sporty classic car. (Sorry, I don’t have the gene that allows you to instantly know a make and model, but the sloping roof suggests a Porsche). The one-floor, hacienda-style abode is big enough to accommodate not just a built-in pool and a courtyard spacious enough to hold group yoga classes for her friends. There is also a roomy cottage that enables three cash-strapped 20-something filmmaking brothers (Nat Wolff, Jon Rudnitsky and Pico Alexander, a name that befits a cocktail) to camp out with her while waiting for their movie deal to go through. That Alice just met this trio on a drinking binge while celebrating her big 4-0 at a bar and almost slept with one of them (Alexander, who is adorable and knows it)—well, this act of charity seems to be the very least she can do. That makes for one big kooky makeshift family. Then her estranged husband has second thoughts and shows up unannounced at her door. Supposedly amusing testosterone-induced alpha-male antics follow.

The blizzard of white privilege that bedecks “Home Again” is practically blinding (I counted three ethnically diverse actors in small speaking roles). If this sounds something like a junior-league variation on something like “It’s Complicated” with the addition of our heroine relying on her trio of house guests as unpaid child-care providers, a tech troubleshooter and a live-in boy toy, that's because it is. Eau de Nancy Meyers, the queen of upper-class affairs of the heart amid decadent décor porn, is all over this. But she is actually on the sidelines as one of the producers. Instead, this is the brainchild of her 30-year-old novice writer-director daughter, Hallie Meyers-Shyer, and the organic apple certainly didn’t fall far from the artisanal tree.

To be fair, I confess to having a lovingly curated weak spot for much of Meyers’ oeuvre after she split from hubby Charles Shyer (who fared less well without her input): “What Women Want,” “Something’s Gotta Give,” “The Holiday,” “The Intern”—primo wish-fulfillment chick flicks one and all, and each eminently re-watchable. But even if “Home Again” was released when there wasn’t a national crisis affecting a large portion of the country, it would still seem somewhat off. Meyers-Shyer has said that she wanted to reflect the fact that women seem to be getting divorced earlier in their lives these days combined with a gender twist on a May-December romance. Fair enough. But the hurdles that Alice faces aren’t all that relatable or even much of a problem once she summons the courage to verbally confront them. Her nice estranged husband wants her back. Her easy-access young sex partner has maturity issues. Her first client in her new career as a decorator is a stereotypical self-centered nightmare, a role that totally wastes Lake Bell’s talents.

Speaking of which, after her awards-worthy work in “Wild” and on TV’s “Big Little Lies,” Witherspoon is taking at least two steps backward as Alice. She is just too smart of an actress to believably play a pushover who is prone to anxiety attacks and being taken advantage of by others. When her brief imitation of Bell’s snarling Labradoodle is her funniest scene, there is a problem here.

Apparently, the most unbelievable part of the film—that Alice would allow three strangers to move in with her and her young daughters—actually happened to a woman that Meyers-Shyer knew. Fine. But her job was to make it believable in her movie instead of just a plot contrivance. Yes, the casual-chic interior designs shine as much as her mom’s ever did. But I never really felt at home with “Home Again.” 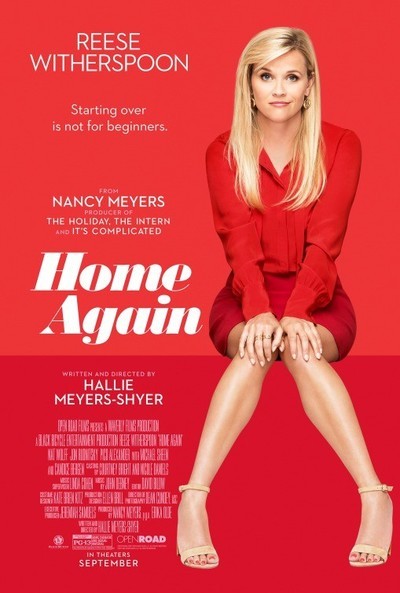 Rated PG-13 for some thematic and sexual material.