“Hitman: Agent 47” is aggressively awful, the kind of film that rubs its lackadaisical screenwriting, dull filmmaking and boring characters in your face, almost daring you to ask the theater operator for your money back. It is a film that feels made out of contractual obligation instead of artistic venture, or even a remote desire to entertain. Other than a few slow-motion action sequences, it does nothing to either distinguish itself from the action movie crowd or even to appeal to fans of the game series on which it is SO loosely based as to really insult its core audience. Here’s where you should know that I’ve played most of the “Hitman” games. I’m not convinced anyone involved in the production of “Hitman: Agent 47” can say the same.

The “Hitman” games are more about strategy than firepower. You have to work in the shadows, avoiding contact with the enemy, working with limited ammo, and often working with the environment to close your contract. Yes, your character is a killing machine, but most often through stealth and heightened abilities, not because he’s some variation on “The Terminator.” Before the credits, the video game iteration of Agent 47 has been obliterated, as Rupert Friend’s title character whirls and spins like Neo at the end of “The Matrix,” eliminating enemies incapable of pointing and shooting their guns in a logical amount of time.

In one of the rare nods to the game series, Agent 47 receives his latest assignment from Diana (Angelababy), his mysterious handler. He has to find Katia van Dees (Hannah Ware) and her father Dr. Litvenko (Ciaran Hinds), the man who created the Agent program decades earlier. Since Litvenko disappeared, nefarious bad guys like Le Clerq (Thomas Kretschmann) have been trying to create their own genetically-modified killing machines, and failing. They need Litvenko to resurrect the program that Agent 47 wants to see destroyed forever. And we quickly learn that Katia is no ordinary daughter, as she has a certain set of skills herself. Meanwhile, an American who calls himself John Smith (Zachary Quinto) tracks down Katie himself. Is he a good guy who can protect her or an enemy in disguise?

It doesn’t matter. You won’t care. “Hitman: Agent 47” is the definition of a soulless film. It is hollow through and through, designed to appeal to an international market with the bare minimum of creative effort put into it to do so. Say what you will about the overall quality of the “Resident Evil” films, but they at least had personality now and then, which is what every frame of this film is lacking. Just when you think “Agent 47” might get interesting—mostly in a couple fight scenes with Quinto, who at least seems like he’s the only one having a good time—director Alexsander Bach and writers Skip Woods and Michael Finch go back to the same slo-mo, dull action well again. There’s no character worth caring about, no performance that registers, and no visual style to really note. It’s almost a non-movie.

Making a movie about a heartless killing machine can be tough on a filmmaker, and Bach cribs notably from “The Terminator” series to do so. Sure, it’s difficult to care about Agent 47, but that’s where the filmmaking needed to elevate to make the project worthwhile. Design a few interesting action set pieces. Bring some flair and style to the project that’s even as good as the video games. Yes, the video games on which this film is based have more character and artistic merit. You’d be better off paying someone to watch them play for 96 minutes than to see “Hitman: Agent 47.” 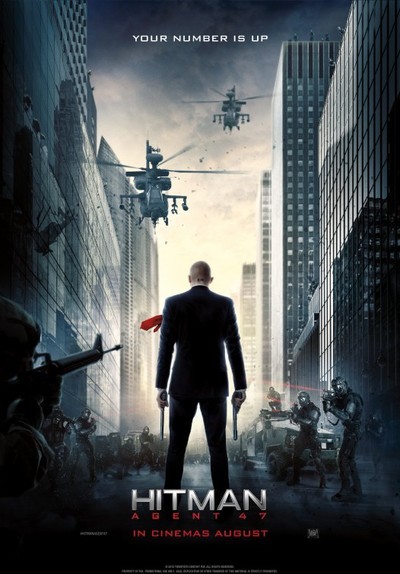 Rated R for sequences of strong violence, and some language