Heimat Is a Space in Time

Thomas Heise’s five-part epic, “Heimat is a Space a Time,” has less in common with traditional visual storytelling than it does with guided meditation. One of its closest cinematic relatives is Ognjen Glavonić’s quietly shattering 2016 documentary “Depth Two,” which investigated the secret mass graves that resulted from Serbian president Slobodan Milošević’s genocidal “cleansing” during the NATO Bombings of 1999. It was an atrocity requiring the involvement of the police, military and numerous citizens, not to mention a willful blind spot utilized by countless others. Glavonić recounted these terrors by pairing current footage of various locations where the events took place with audio of testimonies from those who can vividly recall the stench of the corpses. This intertwining of evocative landscapes and witness statements enabled the most unspeakable imagery to materialize solely in the audience’s minds.

The first 70-minute-long chapter of “Heimat,” titled after the German term for “homeland,” is every bit as riveting as Glavonić’s picture, beginning with a long pan up a signpost, setting the glacial yet urgently transfixing rhythm for all that will follow. After finally arriving at the sign, which reads, “According to legend, here stood grandmother’s house,” Heise cuts to two-dimensional cutouts of iconic characters from “Little Red Riding Hood” populating the surrounding forest. Since this is the only sequence in the film that isn’t shot in black and white, the bright colors of these fantastical figures stand out all the more conspicuously when juxtaposed against the natural landscape, suggesting how still remnants from the past continue to haunt our immediate present. The rest of the film consists solely of Heise, in monotone voice-over, reading accounts and correspondence penned by his family that encompass a century of German history, while the visuals fluctuate between archival materials and modern day footage of diverse sites throughout the country, from cities to labor camps.

Leading the stream of voices resurrected by Heise is his grandfather, Wilhelm, whose essay written at age 14 is read over the film’s opening moments, and it instantly emerges as one of the most astonishing antiwar monologues ever delivered. It’s enormously sobering to hear a schoolboy in 1912 reflecting on how the cultural advances of past centuries have revealed war to be sheer human slaughter contrary to the Christian values his nation supposedly upholds. With awe-inspiring eloquence, he speaks of how “superstition thrives in the soil of stupidity” when education suffers during wartime, calling to mind the “2001”-inspired devolution of man portrayed in “There Will Be Blood,” as the spiritual degeneration of its characters cause them to transform into murderous apes. The slow, subtle rise of Nazism eventually causes Wilhelm to be discharged from his teaching job a quarter-century later, resulting from his “mixed race” marriage to a Jewish sculptor, Edith. The ominous squeal of a train grinding along the rails of a track, foreshadowing the crowded transports bound for concentration camps, accompanies Wilhelm’s letter pleading to remain employed.

There’s no question that the very next sequence is also the most unforgettable, in part because it clocks in at 24 minutes, which is a longer running time than some of the film’s later chapters. For the entirety of this segment, the camera pans down a list of names belonging to Jewish citizens who were sent to camps starting on October 19th, 1941. Since each individual page is dated at the top, it ups the tension considerably as the correspondence read by Heise, detailing the growing number of abuses suffered by his family, moves ever closer to that day. Even more powerful is the scene that follows, set in the ruins of a camp, where the camera lingers on piles of wood and rubble reminiscent of the emaciated dead left off-camera here yet immortalized elsewhere. On the soundtrack is a Nazi-era hit sung by Hungarian performer Marika Rökk that chillingly embodies the willful denial that governed German thought during WWII: “Every thing has its reason and its meaning / Don’t look here, don’t look there / Just look straight ahead / Whatever comes your way / Just never you mind.”

If the film had stopped not long after that scene, it would rank among the finest documentaries ever made about the Holocaust. The biggest problem with Heise’s film is that it plays more like a rough cut. At 3 hours and 38 minutes, what begins as an entrancing experience becomes increasingly exhausting, as the mere act of squinting at nonstop subtitles set against largely light backdrops requires more than one intermission. Since the events and locations covered here are presented without any context, the later sections of the film will prove difficult to follow for those viewers unschooled in German history or unfamiliar with figures like Wolf Biermann and Christy Wolf, both noted dissidents of East Germany. Certain moments, such as a four-minute-long wordless close-up of a train passing by the lens, are so interminable that the film threatens to collapse into indulgence. Another sequence that could’ve likely been trimmed is Heise’s extended interview with theatre director Heiner Müller, whom the filmmaker closely collaborated with after his movies were censored in East Germany. Müller entertains Heise’s discussion regarding the tragedy of modern socialism until he quips about the director continuing to record them relentlessly.

Just as a train ultimately ends up at the spot where its journey began, the sense of history repeating itself during the oppressive reign of East Germany’s Socialist Unity Party is signaled by a reprise of Rökk’s song, while Heise’s father Wolfgang winds up jobless just as his father did after refusing to conform to Party policies (a Swastika also materializes amongst freshly scrawled graffiti). These are effective moments amidst an overabundance of excess. Far too much time is spent on Udo, the insufferable lover of Heise’s mother Rosemarie, who at one point wistfully talks of seducing a 14-year-old. Yet Rosemarie’s own diary entries are chockfull of gems, particularly her vivid memories of how a would-be romantic encounter produced nothing more than “harmless kisses that left her cold.”

If this material were compiled into a book, it would be rightfully deemed great literature. As featured in Heise’s film, however, these insightful words are frequently marred by a style oddly akin to a mournful podcast, one that requires listeners to repeatedly peer at their phone to read the subtitles. Only in its first hour or so does “Heimat” reach the heights of “Depth Two,” poetically linking its visuals and testimonies to achieve a potent emotional impact. Perhaps no shot is guaranteed to haunt me more than that of a wind turbine perched outside the aforementioned camp. Though the turbine is placed far out of frame, the shadows that it casts visibly caresses the branches of nearby trees, an indelible metaphor for how the gears of injustice can be sensed even when they’re unseen, and should never be overlooked. 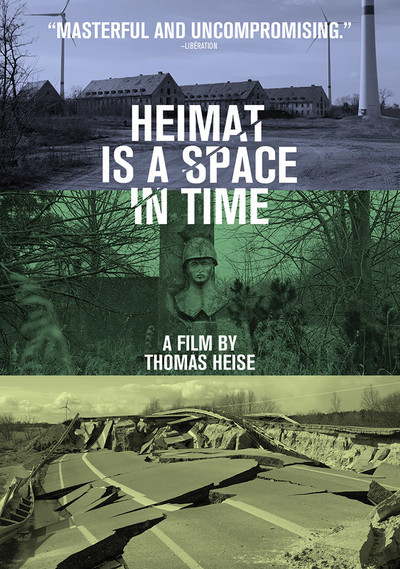