Have a Nice Day

The stylistic quirks that define the bitterly funny Chinese animated neo-noir "Have a Nice Day" are thrillingly original. This is the kind of film that evokes stylistic predecessors like Quentin Tarantino's "Pulp Fiction"—another criss-crossing narrative about several tangentially related small-time crooks—and the fiction films of Chinese filmmaker Zhangke Jia, whose melodramas all concern hard-luck laborers who turn to crime in order to escape dirt road poverty. Still, "Have a Nice Day" stands apart because of its bitterly funny black humor, and idiosyncratic animation and sound design. Writer/director Liu Jian has taken familiar stylistic elements, and made them feel fresh, and exciting. "Have a Nice Day" may be Liu’s second feature after "Piercing I," but it feels like a major breakthrough.

Liu Jian knows that you don't need to know these characters' entire backstories to know who they are. They're the kind of people who used to regularly pop up in classic film noirs, the kind that get more careless and desperate as they get closer to Liu, er Zhang's money. Sure, we learn a little about their respective motives, like the plastic surgery jobs, or country-side retreats they feverishly day-dream about. But what makes these characters stand apart is their mutual desperation. They all want to escape their small Southern Chinese village, a ghost town defined by empty streets, and molting posters for future advancements in and around the mysterious "development zone." Liu’s antiheroes are only in it for the money, and are therefore not that good or bad. Nor are they especially good at being good or bad: each of them eventually winds up lying face down in the middle of a transitory public place, like a road, a deserted hotel, or an internet cafe. These characters exist exclusively in limbo, the best setting for a noir-ish story.

Liu represents these core ideas with a fittingly simple style. That's not a knock, mind you. The individual animation cells in "Have a Nice Day" all have a polished, but mostly static quality to them, as if they were composed meticulously on a Tablet. But, again: these images don't have much depth to them. If anything, they look as flat as the propaganda advertisements for far-away vacation spots, and supposedly idyllic country-side communities that are scattered throughout the village. Even the internet cafe's mural and poster art promises escape, albeit in the form of half-finished versions of popular characters like the Hulk, who appears without his head on an outer wall.

So it's fitting that Liu sparingly animates his characters in order to emphasize their bodies' abrupt movements. Sometimes action is implied through off-screen sound effects. Sometimes it's broken down into minimalistic signs of time's slow passage: curls of cigarette smoke, slow eye blinks, or the sudden twitching of disembodied limbs as they pick up and maneuver heavy objects. In this way, viewers are left with impressions of the characters' gestures. Actions stop and start, never fully completing. Likewise, the film's sound design is, with some exceptions, markedly flat, and simple. Any music you can hear comes from a tinny radio, or the inside of characters' heads. And any noises that objects on-screen make, from the clinking of a heavy mallet to the sizzle of a busted electrical fuse box, all come from objects that are small enough to fit in characters' tightened fists.

As a result: you can never really forget that you're watching an animated movie when you watch "Have a Nice Day." Liu gives viewers an acute look at an under-developed corner of the world that he imagines is exclusively inhabited by would-be refugees. This place isn't a self-contained microcosm: it exists in parts that you, as a relatively passive viewer, must combine in order to understand what you're looking at. Characters only think they're passing through, but are actually forever stuck in place. Their delusions of importance are what makes them funny, though never in a laugh-out-loud kind of way. They stumble around, threaten each other, and dream of new lives far away from their purgatorial home. But their futures are always in the abstract, never to be independently realized. "Have a Nice Day" is accordingly a complex comedy that's small enough to hold in the palm of your hand (it's also only 75 minutes long). I can't wait to see what Liu does next. 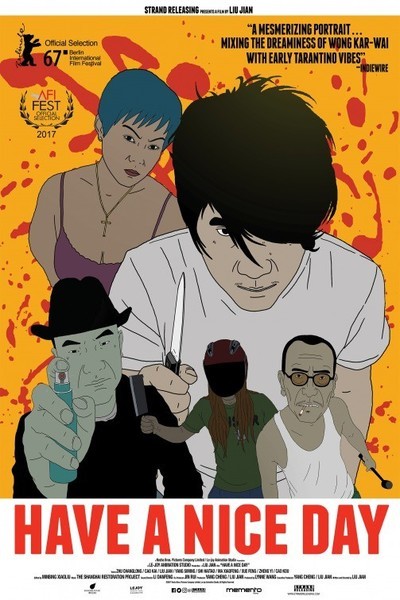