In a way, it's a relief that Clint Eastwood is back home again. In "A Fistful of Dollars" and its two sequels, he shot apart just about every low-budget location in Spain, southern Italy and Sicily. Wherever extras could be hired for 50 cents a day, there you found The Man With No Name.

The supporting actors in these Italian-made movies didn't speak English too well, which probably was a qualification in the original West. They were dirty, sweaty, mean and obscene and scratched a lot and were always spitting all over everything.

What a mess! Sergio Leone, the Italian director who created the sweat, scab and beer school of Westerns, liked to linger on close-ups of horrible wounds and sadistic grins. His favorite camera angle was right behind a boot kicking Clint Eastwood.

But now Eastwood has made the big time, and Hollywood has brought him back home to star in "Hang 'em High." You can tell it's a Hollywood Western because Inger Stevens lives in the boarding house and Ed Begley is shaking his fist at the hero even before the titles begin.

I have come to the conclusion that Ed Begley is in every movie made and Inger Stevens is in every other Western. Begley is a superb character actor, almost a national monument, and you wouldn't think it was a real Western town if Begley wasn't in it.

As was the case with the Italian Westerns, "Hang 'em High" is a revenge story. Eastwood is strung up by a lynching mob, led by Begley. But he's cut down and vows to revenge himself. The friendly hanging judge of the nearby town (Pat Hingle) pins a badge on Eastwood, and he dutifully, sets out to gather enough scabs, scars, blisters and rope burns to satisfy the sado-masochistic standards set by Leone. 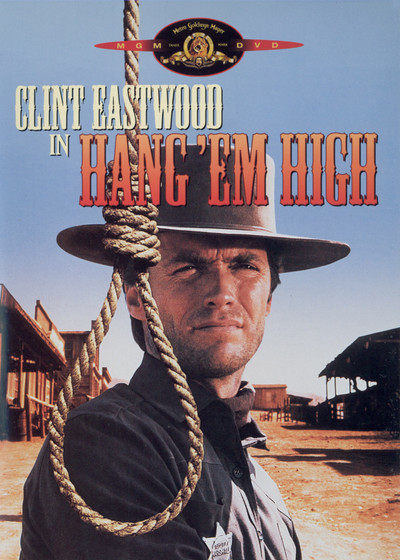