There are two movies that weave in and out of “Hammer.” One is a domestic drama about a father who has no idea how to help his troubled son, and so has pushed him out of his life. The thinking among parents is often that exclusion will lead to healing. Let kids go through their drama but don't let it infect the rest of the family and maybe they'll return when they're straight again. It sometimes works the other way. At the same time, “Hammer” is a tense little thriller, a tight movie about someone who made a very bad decision and is now trying to fight his way out of it. Both movies work. At times, “Hammer” reminded me of David Gordon Green’s “Undertow” or Jeff Nichols’ “Mud,” films that use the natural world in an effective manner, reminding us that thrillers don’t need concrete and steel to be tense. After all, nothing is scarier than a well-shot cornfield.

“Hammer” opens with a drug deal. Chris Davis (Mark O’Brien) is on a deserted road doing the deal with a shady former colleague named Adams (Ben Cotton) and his girlfriend Lori (Dayle McLeod). Cuts back to home introduce us to Stephen Davis (Will Patton) and his wife Karen (Vickie Papavs) and hint at tension in the household. Karen’s father is being put in a home and younger brother Jeremy (Connor Price) is questioning decisions they made to push Chris out of the house. As he says, if you treat someone like an outsider they often just become more of an outsider. Dealing with children who fall into addiction or lives of crime can often make for incredibly tough decisions for parents as to how to walk that line between support and enabling.

Let’s just say the deal goes very wrong and Stephen, who hasn’t seen his son in a long time, suddenly witnesses him speed through an intersection on a motorcycle. He does a 180 and follows him, noticing blood on the panicked young man’s shirt. Dad learns that something bad happened and there are bags of money and a body in a field. Will Patton is absolutely phenomenal in the way he conveys the immediacy of the situation. What do you when you see your son in danger? What if it’s a son who has been on the wrong side of the law before and helping him could pull you and the rest of your family down with him? How do you balance unconditional love with safety concerns for your child, the rest of your family, and yourself? The best parts of “Hammer” have a sweaty urgency—desperate people making decisions in the moment in a way that feels organic and immediate. Not all of them are the right decisions but thrillers often live and die on how much we believe in the actions of its characters. Bad thrillers use their people as plot devices, pushing forward the twists and turns of a screenwriter instead of allowing the characters to drive the action. Thanks largely to great work by Patton and O’Brien, I believed every second of “Hammer.”

It helps to have a strong eye too from director Christian Sparkes and cinematographer Michael Robert McLaughlin. From the opening shot of a blurred face behind a rainy, partially down window, there’s a visual language to “Hammer” that’s often missing from works like this. Sparkes finds a way to make his film feel claustrophobic even when Chris and Steven are on the side of an open road. It’s the tension of the situation pushing the imaginary walls in on them. And we feel it too.

“Hammer” might feel a little slight to some and I must admit to liking the first half much more than the second. The set-up is so confident and intriguing that it’s a little understandable that the follow through doesn’t quite fulfill that set-up. However, there is a shot near the end of Patton’s Stephen—when he finally allows the emotion of the violent, devastating day to catch up to him—that is breathtaking. You realize that this man hasn't paused to breathe much less feel or think since he saw his son in need. It just triggered something in him to act. Sparkes dedicates the film to his father, whose nickname appears to give the movie its title as well. Dad would be proud. 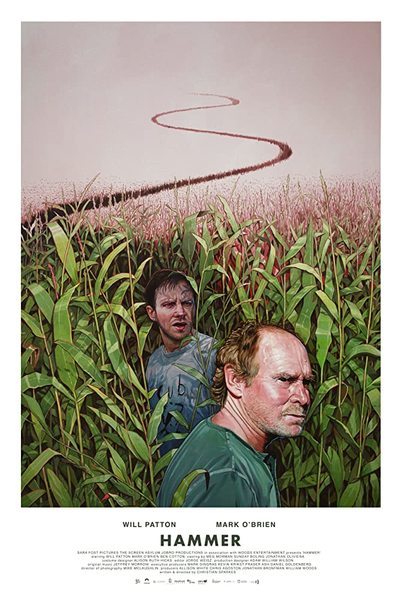 Will Patton as Stephen Davis