One of the most recent horror movies to polarize audiences was Robert Eggers’ “The Witch,” that creepy 1630s period piece with Old English dialogue, an iconic sinister goat, and a terrifying finale. But Lukas Feigelfeld’s “Hagazussa” makes "The Witch" seem as zippy as “The Fast and the Furious: Tokyo Drift” in comparison—“Hagazussa” is even more atmospheric and muted, with even less of a threat that something will jump out at you. Those are noble values for a horror movie, but it’s a shame they’ve lead to a frustrating genre pic that’s just too dreary to be scary.

Presenting a 15th century woman’s psychological horror in slow motion, “Hagazussa” doesn’t so much have a story as a compelling yet straight-forward theme, which is that living alone in the mountains at such a period of time is a terror, especially if you’re a woman. The main focus of the story is a meek woman named Albrun (Aleksandra Cwen), who has been living in a hut next to a creek all her life. In the first of the film’s four segments, we see Albrun as a quiet young girl (played by Celina Peter) who witnesses her mother Martha (Claudia Martini, in a freaky performance) become bedridden with bulbous tumors on her body, and then begin to act very strangely. Feigelfeld establishes aesthetic confidence early by relying on minimal dialogue and expressive sound design, and this unsettling passage is like a 25-minute short film about a transformed mother and observant daughter that could stand on its own.

Hopes of that nervous energy continuing, however, are dampened by a resulting character study that isn't ominous so much as monotonous. As strange as the mostly silent preceding events are, watching a grown-up Albrun in a vulnerable environment with a newborn baby and gradually embracing her witchy genetics, many scenes play out in a straight-forward fashion. An interaction with a possible new friend named Swinda (Tanja Petrovsky), a stroll through the dark woods after hearing her dead mother call her name—"Hagazussa" goes from one droning sequence to the next and doesn't make its bare script more interesting with its glacial pace. All the while, Feigelfeld's horror only comes from a couple horrific images but not an overall gripping fear, and he withholds so many details about any sinister mechanics that "Hagazussa" can only best function as another example of how madness runs in the family.

“Hagazussa” is largely held together by an intense performance from Cwen, who adds bulging eyes and guttural wails to her character's largely internal nature. Given the very spare dialogue throughout the movie, we merely watch her from the outside, making for a vivid performance in a straight-forward course of events. She is intricately tormented, we can see, but the script keeps us from getting too close.

Feigelfeld approaches this project with a precise vision, reminding you of that any time he has a seamless edit (a close-up of a skull that fades into the mountain’s billowing fog) or when cinematographer Mariel Baqueiro tidily frames Albrun within her wild forest surroundings. He wants you to get a five-senses experience of being on that mountain with Albrun, often focusing closely on hands for long takes, like when Albrun is milking one of her goats in a moment of tranquility, resting her lonely head on its side. But intent is not the question in "Hagazussa" so much as purpose—Feigelfeld simplifies Albrun's descent into madness until there's no anxiety to offer, while forcing his audience to gaze upon extended, defiantly murky images and project grandiosity onto them. His taste for psychedelic horror in nature likely comes down to personal preference, but I found numerous shots plainly ugly, if not wasteful of his fledgling ambitions.

Whether it’s the reoccurring, gorgeous mountainside shots that run dull or the trippy shots that submerge the camera in green swamp water, “Hagazussa” has a very blunt idea of the peace and chaos it wants to use for its atmosphere. Even the flourishes that are usually thrilling in films like these—minute-long static shots of someone slowly standing up, oppressive passages of silence, a score that’s comprised of approximately two-and-a-half notes—feel cheap here. In the end, you don't take away an atmosphere you can't shake off, so much as the forcefulness of a new director demanding to be taken seriously. 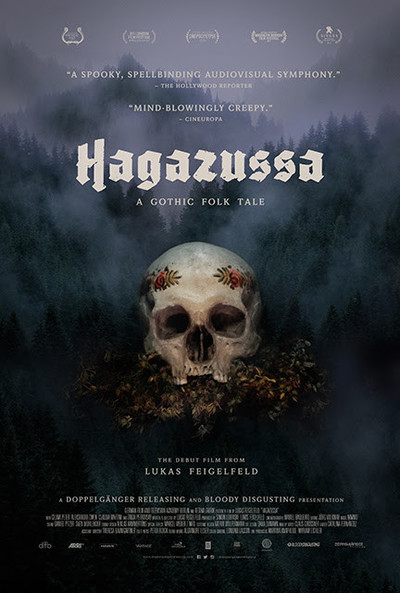