Life as it is

Powered by JustWatch
>Jean Renoir's "The River" (1951) begins with a circle being drawn in rice paste on the floor of a courtyard, and the circular patterns continue. In an opening scene, the children of a British family in India peer through porch railings at a newcomer arriving next door. At the end, the same children, less one, peer through the same railing at a departure. The porch overlooks a river, "which has its own life," and as the river flows and the seasons wheel in their appointed order, the Hindu festivals punctuate the year and all flows from life to death to rebirth, as it must.
Advertisement

The film is one of the simplest and most beautiful by Jean Renoir (1894-1979), among the greatest of directors. Based on the novel by Rumer Godden, who was born in India and lived there many years, it remembers her childhood seen through the eyes of a young girl named Harriet (Patricia Walters), who falls in love with the new neighbor. He is Capt. John (Thomas E. Breen), an American who lost a leg in the war and now has come to live with his cousin, Mr. John (Arthur Shields).

We meet Harriet's family: Her parents, her three sisters, her brother Bogey. We also meet Mr. John's daughter Melanie (Radha), whose Hindu mother has died, and Valerie (Adrienne Corri), whose father owns the jute factory that Harriett's father manages. There are others: The family's nanny, the young Indian man who courts Melanie, the Sikh gatekeeper, the young Indian boy who is Bogey's playmate.

Although the film covers one year, the impression is of an endless summer day during which the girls play and write in their journals, observe the flow of life outside their gates, and are fascinated by Capt. John. At the time of the Hindu festival of light, there is a little party at the family home with music from a wind-up phonograph, and each of the older girls asks Capt. John to dance before he finally settles in a corner with Valerie. It becomes clear to young Harriet, despite her crush on the captain, that he has eyes for the red-haired Valerie. What she does not notice is that he is also attracted to his half-Indian cousin Melanie, and she to him. One day both Melanie and Harriet follow Valerie and Capt. John out into a grove, where they kiss. "It was my first kiss," Harriet remembers, "but received by another." Melanie must have felt the same.

To some degree, the girls are in love with Capt. John because he is the only eligible man in their lives. No other characters appear or are discussed; that he is sad and detached they can overlook. Harriet impatiently wants to be old enough to be visible to Capt. John. "I want to be outstandingly beautiful," she tells her pregnant mother. Harriet's narration is spoken by an adult voice; we understand these events take place around 1946.

Capt. John has come to live in India, he tells the Anglo-Indian Melanie, because with one leg he feels like an outsider. "I'm a stranger wherever I go," he says, and she replies quietly, "Where will you find a country of one-legged men?" She is a stranger, too, because of her mixed race. "I don't know where you belong," her father tells her.

Certainly all of their lives stand apart from India; we never hear a conversation between Melanie and her Indian suitor, or between Bogey and his Indian playmate, and the nanny is limited to nannyisms; she is not even given the Indian titleayahby which all nannies were known. Scenes of the real India outside the compound are mostly in long-shot.

The film is not constructed around high melodrama, but its deepest feelings are expressed when the two outsiders, Melanie and Capt. John, speak with each other, almost in code. Melanie has an enchanted scene in which she tells a story about the meeting of Prince Krishna and his bride, named Radha. The actress Radha was a dancer, and her character's story leads into a dance scene that allows some of the color and mystery of Indian religion to enter the isolation of the British family's compound.

"The River" and Michael Powell's "The Red Shoes" are "the two most beautiful color films ever made," Martin Scorsese says in an interview on the new Criterion DVD of the restored print. I saw the movie for the first time when Scorsese's personal 35mm copy played at the Virginia Film Festival some years ago; when I mentioned it to him, he said, "I watch that film three times a year. Sometimes four."

On the DVD, he says it reaches him more powerfully than "Rules of the Game," considered Renoir's masterpiece. Some will agree, some will not. "The River" is like an Ozu film in the way it regards life without trying to wrest it into a plot. During the course of the year, the girls fall in love with the same unavailable man, there is a death and a birth, and the river continues to flow.

Renoir, son of the impressionist painter Pierre-Auguste Renoir, directed his first film in 1924 and was considered a grand master when he fled the Nazis and moved to Hollywood in 1941. There he worked with mixed success until, by the time he made "The River," he was almost unemployable. The film was financed by an outsider, Kenneth McEldowney, a Hollywood florist who loved Godden's novel.

Renoir insisted on filming it on location in India, which he did with his nephew Claude Renoir as cameraman (and young Satyajit Ray as an assistant director). It was the first Technicolor film made in India. The budget was small. There were no stars, and some of the players had never acted before. Much of the atmosphere flows from Renoir's documentary footage, showing a bazaar, life along the river, annual festivals, boatmen at their work, and Hindus descending flights of stairs both grand and humble to bathe and pray in the water.

The British family lives apart from this India, and knows it. Behind the walls of their garden is a separate world, protected by the stern Sikh gatekeeper; only Bogey's young playmate climbs the walls. Together, the boys sneak out to the bazaar and watch a snake-charmer, and Bogey finds another snake in the roots of the giant banyan tree right outside the garden -- a tree whose roots fall down from the branches to reach for the ground, and among which gods and spirits are said to live.

There are subdued issues here involving colonialism and racism. Does Capt. John shy away from romance with Melanie because she is not white? Is Harriet's father being paternalistic when he "loves" the sight of the laborers bearing their vast bundles of jute into the factory? The issues are there, but they are not called into focus, and the life Harriet shows us is the only one she knows.

The center of her world is a cubbyhole under the stairs, where she keeps her poetry and journals, and it is a betrayal when Valerie snatches away a notebook and reads Capt. John some of the younger girl's love poems. India itself is on the brink of independence and partition, but Harriet is on the brink of adolescence, and that is much more important to her, as perhaps is natural.

Films have grown so aggressive and jittery that it takes patience to calm down into one like "The River." Its most dramatic moment takes place offscreen. Renoir is not interested in emotional manipulation but in regarding lives as they are lived. Not everyone we like need be successful, and not everyone we dislike need fail. All will be sorted out in the end -- or perhaps not, which is also the way time passes and lives resolve themselves.

Nothing is really finished at the end of "The River." Despite Jane Austen's insistence that a man like Capt. John "must be in want of a wife," he is still in want as the film ends. Harriet has not yet grown up. Melanie has still not found a place for herself. Renoir's way of bringing his story to a conclusion is a form of understated poetry. All three girls receive letters from Capt. John. All three open them and begin to read them while sitting on the steps, and then from within the house comes a baby's cry. The nanny emerges to announce: "It's a girl!" And the three girls jump up and rush into the house, the letters fluttering forgotten to the ground behind them.

A new print of "The River" plays Feb. 24-March 3 at the Music Box Theatre, 3733 N. Southport. "The River" is available on DVD, as are these other titles in the Great Movies series: Renoir's "Rules of the Game" and "Grand Illusion," Powell's "The Red Shoes" and Satyajit Ray's "Apu Trilogy" and "The Music Room." 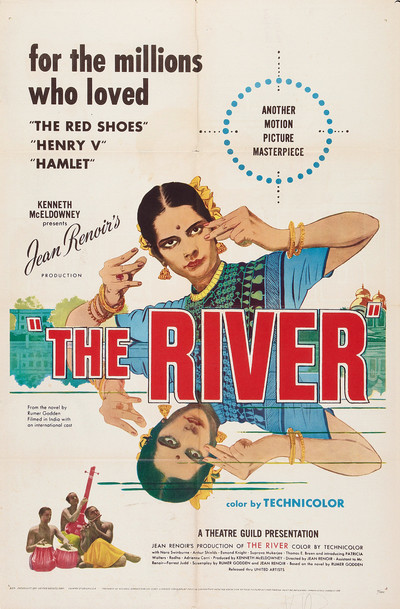