The bond between parent and child

Why was I thinking about flower arrangement while watching "The Only Son" the first sound film made by the Japanese master Ozu? It must have involved the meticulous and loving care he used with his familiar visual elements. In Japan in 1984 I attended a class at the Sogetsu School, which teaches ikebana, the Japanese art of flower arranging.  I learned quickly that sorting a big bunch of flowers in a vase was not ikebana. One selected just a few elements and found a precise way in which they rested together harmoniously.

If you think that ikebana has nothing to do with film direction, think again. The Sogetsu School was then being run by Hiroshi Teshigahara, the director of "Woman in the Dunes," who left filmmaking to become the third generation of his family to head of the school. after he died in 1991, his daughter became the fourth. I gathered that the Teshigaharas believed when you studied ikebana you studied your relationship with the material world.

Now turn to Yasujiro Ozu, who is one of the three of four best filmmakers in the world, and certainly the one who brings me the most serenity. I've seen 14 of his films, four of them with the shot-by-shot approach. That doesn't make me an expert, but it makes me familiar with his ways of seeing. In the films I've seen, he has a few favorite themes, subjects and compositions, and carefully arranges and rearranges them. Some say "he makes the same film every time." That's like saying "all people are born with two eyes." What matters is how you see with them.

Over an opening frame of "The Only Son" (1936), we read a quotation by the writer  Akutagawa: "Life's tragedy begins with the bond between parent and child." So do most of Ozu's films. Again and again, he focuses on parents and their children, and often on their grandchildren. A typical plot will involve sacrifice by a parent or a child for the happiness of the other. It is not uncommon for both parent and child to make sacrifices in a mistaken belief about what the other desires. The issues involved are marriage, children, independence for the young, care for the old, and success in the world.

He tells these stories within a visual frame so distinctive that I believe you can identify any Ozu film after seeing a shot or two, sometimes even from a still. How he came upon his approach I don't know, but you see it fully mature even in his silent films. For Ozu, all depends on the composition of the shot. He almost never moves his camera. He usually shoots from the eye level of a person seated on a tatami mat. He often begins shots before characters enter, and holds them after they leave. He separates important scenes with "pillow shots" of exterior architectural or landscape details. He uses evocative music, never too loud. I have never seen him use violence. When violence occurs, people commit it within themselves.

Parents and children, then families, are his chosen subjects. He tells each story with his familiar visual strategy, which is pure and simplified, never calling attention to itself. His straight-on shots are often framed on sides and back, and with foreground objects. His exteriors and groups of two or more characters are usually at oblique angles. Is this monotonous? Never, because within his rules he finds infinite variation. A modern chase scene is much more monotonous, because it gives you nothing to think about.

In "The Only Son," there is a remarkable moment when we have a great deal of time to think. The story is about the son of a widowed mother who works in a provincial silk spinning mill. This is hard and spirit-crushing work, but she does it to put her son through high school and set him on his road in life. After graduating, he follows an admired teacher to seek his future in Tokyo. Four years pass. His mother comes to visit him, unannounced. They are happy to see one another, they love one another, but he has a surprise: He has a wife and an infant child. Why didn't he tell her? We gather he didn't want to create an occasion for her to visit Tokyo and find that he is very poor, has a low-paying job, teaching geometry in a night school, and that he lives in a desolate district in view of the smokestacks of the Tokyo garbage incinerators.

The rest of the plot you can discover. It leads to a conversation in which he shares his discouragement, and tells her she may have wasted her sacrifice. She encourages him to persevere. He thinks he's had a bad roll of the dice. There is no place for him in Tokyo. Simple mill worker that she is, what can she reply to this? She sits up late, sleepless. He awakens, and they talk some more. She weeps. In a reframed shot, his wife weeps. Then Ozu provides a shot of an unremarkable corner of the room. Nothing much there. A baby bottle. A reproduction of a painting. Nothing. He holds this shot. And holds it. And holds it. I feel he could not look at them any longer, and had to look away, thinking about what has happened. Finally there is an exterior pillow shot of the morning.

If Ozu returns to characteristic visuals, he also returns to familiar actors. In "An Only Son," the small but important role of the hero's teacher is played by Chishu Ryu -- the teacher who, after moving to Tokyo, fails to realize his own dreams and, as the son bitterly tells his mother, is "reduced to frying pork cutlets." This was Ryu's seventh film for Ozu. In all he was to appear in 52 of Ozu's 54 films, between 1929 and 1962. He is the old father in "Tokyo Story" (1953).

Ryu is an actor who we recognize from body language. He exudes restraint, courtesy. He smokes meditatively. He said Ozu directed him as little as possible: "He had made up the complete picture in his head before he went on the set, so that all we actors had to do was to follow his directions, from the way we lifted and dropped our arms to the way we blinked our eyes."

Ryu is the ideal actor for Ozu, because he never seems to be trying. He is the canvas. By not "acting," he invites us to look inside him, and find a world there. I care deeply for his characters and remembering them, each looking similar, each distinctive. Acting like his doesn't win prizes like the Oscar; Brando drove that kind of acting out of Hollywood, rarely to return.

I really do feel as if Ozu is looking at his films along with me. He isn't throwing them up on the screen for me to see by myself. Together we look at people trying to please, and often failing, and sometimes redeeming. What finally gives the mother hope in this film would sound sentimental if I described it, but it's very serious.

A reminder that we're watching along with Ozu is his little tea pot. In every film of his I've seen, a small tea pot appears here or there in most of the interior scenes. It has a way of moving around, not that you'd notice that. A little unremarkable tea pot. In his first color film, we discovered it was red. Of course it was. On a Japanese scroll, red is the color of the artist's mark.

Ozu's "An Only Son" and "There Was a Father" (1942) will be released Tuesday, July 14, as a two-disc set in the Criterion Collection. Both include interviews with David Bordwell and Kristin Thompson. Also reviewed in my Great Movies series: "Tokyo Story," "Floating Weeds" and "Late Spring." 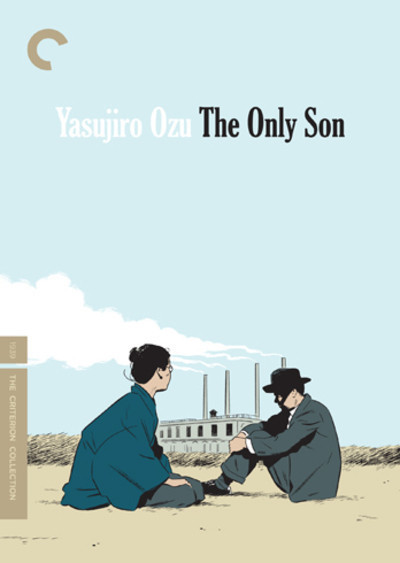