The Earrings of Madame de...

Unhappiness is an invented thing.

So the General tells his wife. He is convinced she wants to be unhappy. She places herself willfully in the way of sadness. It is her choice. There was a time when Louisa would have agreed with him, when their views on society matched perfectly. But now she is truly unhappy, and it is beyond her choice. The General will never understand that. Neither, probably, will her lover, the Baron. It is the gift these men have given her: The ability to mourn what she has lost or never found. It is the one gift they cannot take back. Without it, she would have been unable to understand happiness. Certainly the men cannot.

“The Earrings of Madame de...,” directed in 1953 by Max Ophuls, is one of the most mannered and contrived love movies ever filmed. It glitters and dazzles, and beneath the artifice it creates a heart, and breaks it. The film is famous for its elaborate camera movements, its graceful style, its sets, its costumes and of course its jewelry. It stars Danielle Darrieux, Charles Boyer and Vittorio De Sica, who effortlessly embody elegance. It could have been a mannered trifle. We sit in admiration of Ophuls' visual display, so fluid and intricate. Then to our surprise we find ourselves caring.

The story takes place in Vienna a century or so ago. The General (Boyer) has married late, and well, to Louisa (Darrieux), a great beauty. He gives her expensive diamond earrings as a wedding present. As the film opens, Madame is desperately in debt, and rummaging among her possessions for something to sell. The camera follows her in an unbroken shot as she looks through dresses, furs, jewelry, and finally settles on the earrings, which she never liked anyway. “What will you tell your husband?” asks her servant. She will tell him that she lost them.

She trusts the discretion of Remy the jeweler. She should not. Remy, who originally sold the earrings to the General, tells him the whole story. The General buys back the earrings as a farewell present to his mistress, who is leaving him and going to Constantinople. Certainly the wife will never see them again, and there is poetic justice involved.

The mistress sells the earrings to finance her gambling. The Baron Donati (De Sica) buys them. In his travels he encounters the Countess Louisa, falls in love, courts her, and gives her the earrings. She is startled to see them, but intuits how they came into the Baron's hands. How to explain their reappearance to the General? In his presence, she goes through the motions of “finding” them. The General knows this is a falsehood, and the whole tissue of deceptions unravels, even though the jewels are bought and sold two more times. (There is always a laugh when the jeweler turns up in the General's office for “our usual transaction”).

Standing back a little from the comings and goings of the earrings, which is the stuff of farce, the movie begins to look more closely at Louisa (whose husband's name is never given, so that she is always vaguely the “Countess de...”). She and her husband live in a society where love affairs are more or less expected; “your suitors get on my nerves,” the General fusses as they leave a party. If they do not know specifically who their spouse is flirting with, they know generally. But there is a code in such affairs, and the code permits sex, but not love. The General confronts the Baron with his knowledge of the earrings. (“Constantinople?” “Yes.”) The General tells him, “It is incompatible with your dignity, and mine, for my wife to accept a gift of such value from you.”

The General's instinct is sound. The Countess has indeed fallen in love. The Baron thought that he had, too. Their tragedy is that the intensity of her love carries her outside the rules, while the Baron remains safely in-bounds.

The scene where they fall in love shows Ophuls' mastery. He likes to show his characters surrounded by, even drowning in, their milieu. Interior spaces are crowded with possessions. Their bodies are adorned with gowns, uniforms, jewelry, decorations. Ophuls likes to shoot past foreground objects, or through windows, to show the characters contained by possessions. But in the key love scene, a montage involving several nights of dancing, the circling couple is gradually left all alone.

The Baron and the Countess are at a resort. On the dance floor, they observe it has been three weeks since they danced together--two days--one day--and then they are dancing still and no time has passed. The dialogue and costumes indicate the time transitions, but the music plays without interruption, as do their unbroken movements. They dance and dance, in love. An admiral's wife whispers: “They're seen everywhere--because they can't meet anywhere.” On the last night, one orchestra member after another packs up and goes home. A servant extinguishes the candles. Finally a black dropcloth is thrown over the harp, and the camera moves in until the screen is black and the dance is over. The economy of storytelling here--a courtship all told in a dance--resembles the famous montage in “Citizen Kane” where a marriage dissolves in a series of breakfasts.

The discovery of a possession in the wrong place at the wrong time is an ancient trick in fiction, from Desdemona's handkerchief to Henry James' Golden Bowl to the brooch that should not be around Judy's neck in “Vertigo.” What is interesting in “Madame de...” is the way the value of the earrings changes in relationship to their meaning. At the start Madame Louisa wants only to sell them. Then, when they are a gift from her lover, they become invaluable. The General wants to buy them back once, twice, but finally is reduced to telling the jeweler, “Stay away from me with those infernal earrings!” An expensive bauble, intended to symbolize love, becomes an annoyance and a danger when it finallydoesrepresent it.

For Louisa, the earrings teach a lesson. She is no more morally to blame than her husband or her lover, if only adultery is at stake. But if the General's honor is the question--if being gossiped about by the silly admiral's wife is the result--then she is to blame. Certainly the Baron understands this, and withdraws, his love suddenly upstaged by his regard for his own reputation. The final meeting between the two men is brought about, curiously, by the General's discovery that hedoeshave real feelings for his wife.

Max Ophuls (1902-1957) was a German who made films in Germany, Hollywood and France. His career was used by the critic Andrew Sarris as a foundation-stone of his auteur theory. Sarris famously advised moviegoers to value thehowof a movie more than thewhat. The story and message are not as important, he said, as the style and art. In Ophuls, he had a good test case, because Ophuls is seemingly the director most obsessed with surfaces, with the visual look, with elaborate camera movements. He was dismissed by many as nothing more than a fancy stylist, and it took Sarris (and the French auteurists) to show what a master he was.

His films are one of the great pleasures of the cinema. "Madame de..." is equaled by “La Ronde” (1950) and "Lola Montes" (1955) as movies whose surfaces are a voluptuous pleasure to watch, regardless of whether you choose to plunge into their depths. The long, impossibly complex opening shot of “La Ronde,” with the narrator introducing us to the story and even singing a little song, is one of the treasures of the movies. And who else has such romantic boldness that he will show Louisa writing her Baron day after day, with no letter back, and then have him tell her when they finally meet: “I always answered your letters, my love--but I lacked the courage to mail them.” And then to show his unmailed letters torn into bits and flung into the air to become snow. 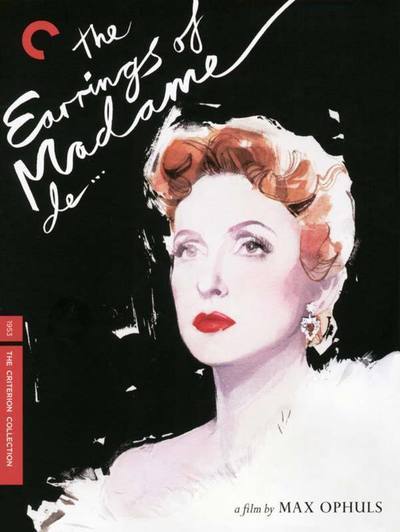