On good days I consider "Citizen Kane" the seminal film of the sound era, but on bad days it is "King Kong." That is not to say I dislike "King Kong," which, in this age of technical perfection, uses its very naivete to generate a kind of creepy awe. It's simply to observe that this low-rent monster movie, and not the psychological puzzle of "Kane," pointed the way toward the current era of special effects, science fiction, cataclysmic destruction, and nonstop shocks. "King Kong" is the father of "Jurassic Park," the "Alien" movies and countless other stories in which heroes are terrified by skillful special effects. A movie like "Silence of the Lambs," which finds its evil in a man's personality, seems humanistic by contrast.

I've seen "King Kong" (1933) many times, most memorably in its re-release in the 1950s, when it did indeed scare me. In recent years I have focused on the remarkable special effects, based by Willis O'Brien and others on his f/x work in "The Lost World" (1925) but achieving a sophistication and beauty that eclipsed anything that went before. The movie plunders every trick in the book to create its illusions, using live action, back projection, stop-motion animation, miniatures, models, matte paintings and sleight-of-hand. And it is not stingy with the effects; after a half-hour of lumbering dialogue and hammy acting, the movie introduces Kong and rarely cuts away from sequences requiring one kind of trickery or another.

But "King Kong" is more than a technical achievement. It is also a curiously touching fable in which the beast is seen, not as a monster of destruction, but as a creature that in its own way wants to do the right thing. Unlike the extraterrestrial spiders in the "Alien" pictures, which embody single-minded aggression, Kong cares for his captive human female, protects her, attacks only when provoked, and would be perfectly happy to be left alone on his Pacific Island. It is the greed of a Hollywood showman that unleashes Kong's rage, and anyone who thinks to exhibit the beast on a New York stage in front of a live audience deserves what he gets--indeed, more than he gets.

The movie was directed by Merian C. Cooper and Ernest Scheodsack, and produced by them with the legendary David O. Selznick, then head of RKO Radio Pictures. Selznick took little credit for the film, saying his key contribution was to put O'Brien's f/x techniques together with Cooper and Schoedsack's story ideas.

Although it has the scope and feel of an expensive epic, "Kong" had a relatively moderate budget of about $600,000. Sequences that would take weeks these days--such as when Kong shakes a log to dislodge the men clinging to it--were done in two days, and the giant wall that separates the island villagers from the monster was a set originally built as the Temple of Jerusalem for Cecil B. DeMille's "King of Kings" (1927). Although Fay Wray had been in movies since 1923 and was a B-list star, her leading man, Bruce Cabot, was appearing in his first picture after having been spotted by Cooper as the doorman in a Hollywood club.

The story is not sophisticated. A movie director (Robert Armstrong) hires a ship, recruits his leading lady from off the streets of New York at the last moment, and sails for a mysterious Pacific island he heard about in Singapore. The island contains a legendary giant ape, which he hopes to use as the star of his movie. Fay Wray plays Ann Darrow, Kong's co-star, and Cabot is the sailor who falls in love with her and saves her from Kong.

Modern viewers will shift uneasily in their seats during the stereotyping of the islanders in a scene where a bride is to be sacrificed to Kong (it is rare to see a coconut brassiere in a non-comedy), but from the moment Kong appears on the screen the movie essentially never stops for breath. In an astonishing outpouring of creative energy, O'Brien and his collaborators (including RKO's legendary visual effects artist Linwood Dunn and sound man Murray Spivack) show Kong in battle with two dinosaurs, a giant snake, a flying reptile and a Tyrannosaurus rex. Later, in New York, he will climb to the top of the Empire State Building and bat down a biplane with his bare hand.

The visual techniques are explained by film historian Ron Haver, whose commentary track on the 1985 Criterion laser disc was one of the first ever recorded. He is amusing in describing how some live-action scenes were miniaturized to make the Kong model look larger; searching for the right screen to project them on, the filmmakers hit on a screen made of condoms, to the consternation of a nearby druggist who could not understand their orders for a gross at a time. Haver also observes how Kong's fur seems to crawl during several scenes; the model was covered with rabbit fur, and the fingers of the stop-action animators disturbed it between every stop-action shot. The effect, explained by the filmmakers as "muscles rippling," is oddly effective. (When a DVD of "King Kong" is finally issued, Turner Pictures would be wise to recycle the Haver commentary.)

From the moment of its making, "King Kong" fell under the censors' scissors. Cooper himself removed one notorious sequence after the world premiere: The men shaken from the log fell into a chasm where they were devoured by giant spiders, but the effect “stopped the picture in its tracks,” people walked out, and Cooper cut it. Another scene was taken out after the Motion Picture Code came into being. It shows Kong curiously removing some of Wray's clothes, tickling her, and sniffing his fingers. Closeups of humans being crunched between Kong's jaws were also cut for various versions, but now the movie is intact again--except for the spiders.

How terrifying was it, really? Variety's original 1933 review conceded that "after the audience becomes used to the machinelike movements and other mechanical flaws in the gigantic animals on view, and become accustomed to the phony atmosphere, they may commence to feel the power." The showbiz Bible Variety complained, however, "it's a film-long screaming session for [Wray], too much for any actress and any audience." Yes, but nobody has ever forgotten that performance. (At a Hollywood party in 1972, I saw Hugh Hefner introduced to Fay Wray. "I loved your movie," he told her. "Which one?" she asked.)

Variety then and now was hard to impress, but my guess, based upon my first viewing as a teenager, is that audiences found it plenty scary. In modern times the movie has aged, as critic James Berardinelli observes, and "advances in technology and acting have dated aspects of the production." Yes, but in the very artificiality of some of the special effects, there is a creepiness that isn't there in today's slick, flawless, computer-aided images.

In "Jurassic Park" you are looking, more or less, at a real dinosaur. In "King Kong," you are looking at anideaof a dinosaur, created by hand by technicians who are working with their imaginations. When Kong battles the large flesh-eating dinosaur in his first big battle scene, there is a moment when he forces its jaws apart, and the bones crack, and blood drips from the gaping throat, and something immediate happens that is hard to duplicate on any computer.

There are of course questions we cannot help asking. Haver asks one: Why did the natives build a door in their wall, so that Kong could come through? Common sense asks another: How tall is Kong, really? (The filmmakers take poetic license: He's 18 feet tall on the island, 24 feet on stage, 50 feet on the Empire State Building.) Even allowing for its slow start, wooden acting and wall-to-wall screaming, there is something ageless and primeval about "King Kong" that still somehow works. 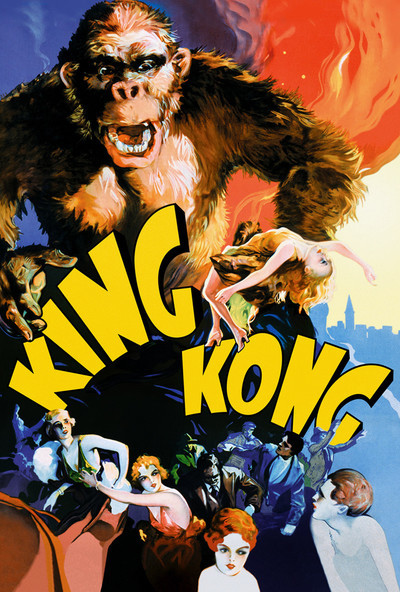