Before the New Wave, before Godard and Truffaut and Chabrol, before Belmondo flicked the cigarette into his mouth in one smooth motion and walked the streets of Paris like a Hollywood gangster, there was Bob. "Bob le Flambeur," Bob the high-roller, Bob the Montmartre legend whose style was so cool, whose honor was so strong, whose gambling was so hopeless, that even the cops liked him. Bob with his white hair slicked back, with his black suit and tie, his trenchcoat and his Packard convertible and his penthouse apartment with the slot machine in the closet. Bob, who on the first day of this movie wins big at the races and then loses it all at roulette, and is cleaned out. Broke again.

Jean-Pierre Melville's "Bob le Flambeur" (1955) has a good claim to be the first film of the French New Wave. Daniel Cauchy, who stars in it as Paolo, Bob's callow young friend, remembered that Melville would shoot scenes on location using a handheld camera on a delivery bike, "which Godard did in 'Breathless,' but this was years before Godard." Melville worked on poverty row, and told his actors there was no money to pay them, but that they would have to stand by to shoot on a moment's notice. "Right now I have money for three or four days," he told Cauchy, "and after that we'll shoot when we can."

This film was legendary but unseen for years, and Melville's career is only now coming into focus. He shot gangster movies, he worked in genres, but he had such a precise, elegant simplicity of style that his films play like the chamber music of crime. He was cool in the 1950s sense of that word. His characters in "Bob" glide through gambling dens and nightclubs "in those moments," Melville tells us in the narration, "between night and day ... between heaven and hell."

His story involves a gambler named Bob Montagne (Roger Duchesne), who is known to everybody. Yvonne (Simone Paris), who owns the corner bar, bought it with a loan from Bob. A local police inspector (Guy Decomble) had his life saved when Bob pushed a killer's arm aside. Paolo (Cauchy) is under Bob's wing because his father was Bob's old friend. As the movie opens, Bob sees a young streetwalker named Anne (Isabelle Corey) eat some French fries and then accept a ride from a client on a scooter. Later, when Anne seems about to fall into the power of the pimp Marc (Gerard Buhr), Bob orders Marc away and brings Anne home to his apartment--not to sleep with her, because that would not be cool, but as a favor to Paolo.

It is 1955. Bob has gone straight for 20 years. Before that, we understand, there was a bank job that led to some time in prison. Bob was a gangster in prewar Paris; "it's not the same anymore," he observes. Cauchy, whose memories are included in a filmed monologue on the DVD, explains that the war brought an end to the old criminal way of life: "These days, gangsters are pathetic delinquents. Gangsters back then, there was more to them." Everybody understands that Bob belongs to the old school.

Melville (1917-1973) was born Grumberg. He changed his name in admiration for the author of Moby Dick. He was a lover of all things American. He went endlessly to American movies, he visited America, he shot a film in New York ("Two Men in Manhattan"), and Cauchy remembers, "He drove an American car and wore an American hat and Ray-Bans, and he always had the Armed Forces Network on his car radio, listening to Glenn Miller." He inhaled American gangster films, but when he made his own, they were not copies of Hollywood but were infused by understatement, a sense of cool; his characters need few words because so much goes without saying, especially when it comes to what must be done, and how it must be done, and why it must be done that way.

"Bob le Flambeur" opens by establishing the milieu. We see water trucks washing the streets at dawn. We follow Bob to the track, to the casino, and finally back to the neighborhood to lose his final 200 francs. He hears an amazing thing: The safe of the casino at Deauville sometimes contains 800 million francs. He determines to assemble a gang of friends and experts and crack it.

Melville is well aware of the convention where a mastermind uses a chart so his confederates (and the audience) can understand the logistics of a heist, but "Bob le Flambeur" surprises us: First, Bob walks everyone through their paces inside a large chalk outline of the casino, painted on the grass of an empty field. Then, "here's how Bob pictured the heist," the narrator tells us, and we see the gang moving through a casino which, in this fantasy, is entirely empty of customers or employees.

The scheme is fairly simple, involving gunmen who hold everyone at bay while an expert cracks the safe. As the expert practices on a duplicate safe, he uses earphones and finally an oscilloscope to hear what the tumblers are doing, and Melville punctuates the intense silence of this rehearsal with shots of the safecracker's dog, a German Shepherd who pants cheerfully and seems encouraged by his progress.

The safecracker is played by Rene Salgue, who was, Cauchy says, a real gangster. It was not easy for Melville to find successful actors who would agree to work for nothing and drop everything when he had raised more money; Duchesne, who plays Bob, was considered a risk because of a drinking problem. And as for Isabel Corey, whose performance as Anne is one of the best elements of the movie, Melville picked her up off the street. Offered her a ride in his American car. Found out she was almost 16.

Partially as a result of the legend of "Bob," famous actors came around later. Melville's "Le Cercle Rouge" (1970), which his admirer John Woo restored for a 2003 release, stars Alain Delon and Yves Montand. Delon also worked for him in "Le Samourai" (1967), and "Un Flic" (1972); Jean-Paul Belmondo was in "Aine des Ferchaux," also known as "Magnet of Doom" (1963). Oddly enough, Jean Gabin, the quintessential French crime actor, who specialized in the kind of restrained acting Melville admired, never worked with him.

The actors are not required to do much. Like actors in a Bresson film, they embody more than they evoke. Most of what we think about Bob is inspired by what people say about him and how they treat him. Duchesne plays the character as poker-faced; he narrows his eyes, but never widens them, and after Paolo blabs in bed to Anne about the plan and she blabs in bed to Marc, who is a police informer, Bob slaps her and walks out without betraying any emotion. Oh, first he leaves the key to his apartment with Yvonne, "for the kid," because he knows Anne will need a place to stay now that Bob knows about Paolo and Paolo knows about Marc.

Women are the source of most of the trouble in Bob's world. Anne's imprudence is repaired in the film, but there is also betrayal from the wife of a casino employee, who finds out about the plot from her husband. Melville liked women, Cauchy tells us, but he preferred to hang out with his pals, talking about the movies. Bob gets Anne a job as a bar girl in a nightclub, notes her quick advancement to cigarette girl and then to "hostess," and tries his best to prevent Marc from becoming her pimp.

One night, perhaps because despite her coldness she feels a certain gratitude, she hands Bob a flower. The gesture must have meant something to Melville, whose "Le Cercle Rouge" also has a man being offered a flower by a cigarette girl.

The climax of "Bob le Flambeur" involves surprising developments that approach cosmic irony. How strange, that a man's incorrigible nature would lead him both into and through temptation. The twist is so inspired that many other directors have borrowed it, including Paul Thomas Anderson in "Hard Eight," Neil Jordan in "The Good Thief," and Lewis Milestone and Steven Soderbergh, the directors of the "Ocean's Eleven" movies. But "Bob" is not about the twist. It is about Bob being true to his essential nature. He is a gambler. 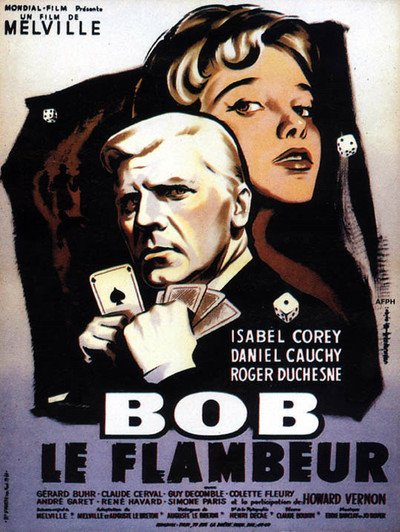