In pretty much any motion picture, or work of fiction, if there’s a scene in which a character rationalizes a clearly ill-advised appropriation by saying, “What makes money bad? The people. What the people do with it,” you can be pretty sure that this character is going to get a hard lesson not in what people do with money, but what they’ll do for it. James Franco’s Tom Wright, a down-on-his-employment-luck contractor moved from the U.S. to London with his wife Anna, played by Kate Hudson, makes the above-quoted pronouncement after finding over a quarter-of-a-million British pounds stashed in the false ceiling of a tenant who’s just croaked of a drug OD.

Tom’s in heavy debt—the house he’s inherited in the U.K., and is renovating, is a money pit, and he and Anna are about to be evicted from the house they’re renting and subletting. So he could use the money. Who couldn’t, at least among us? Presenting the pile to Anna, Tom puts on his best head-cocked James Francoesque smile and says, “So what do we do?” and Anna puts on her best Kate-Hudson-in-a-slightly-cloudy-mood face and replies, “We call the police.” And of course, they don’t; instead, the police, in the form of stalwart Tom Wilkinson, as a harried detective who’s got a personal stake in tracking down some drug-running villains, come calling. Wilkinson’s character knows that the dead fella who was hiding the money has some very unpleasant associates indeed, as does the audience: this movie opens with a ruthless robbery/burn executed by some nasties led by Sam Spruill. And he’s not the only one who wants the loot; the robbery victim, a new-villain-in-town-fresh-from-Africa played by the formidable Omar Sy is also irritated.

You’d think with such a formidable group arrayed against him and his interests, Tom would fold, but were that the case, we’d have maybe a 20-minute movie. No, Tom digs in his heels, and various not-entirely-unpredictable twists ensue. Rather than get super, super mad at Tom the way any sane person might be expected to, Anna reveals herself to be something of a pushover by going all in with him. My wife—I think I’ll keep her! If I don’t get her killed.

“Good People” is not an indifferently crafted movie. The script, by Kelly Masterson (who also wrote the galvanic 2007 Sidney Lumet thriller “Before The Devil Knows You’re Dead”) from a book by Marcus Sakey, gives the impression of having been a tight, lean one. The direction, by Danish-born Henrik Ruben Ganz, a veteran of the original European version of the TV series “The Killing,” is sharp and atmospheric, shot in nicely judged grades of blue and grey that give the proceedings a foreboding, near-funereal feel. And yet the film never catches the spark necessary to make it truly nail-biting. The climax, set in the fixer-upper house that’s caused Tom and Anna such grief, delivers a good number of grisly jolts—ones that won’t be unfamiliar to anyone who knows the gleefully heinous 1978 grindhouse classic “The Tool Box Murder,” but that’s probably (or hopefully) not a whole lot of people, so, you know—but again, not enough to put the movie into any really effective high gear. It could be that Franco and Hudson, while not phoning it in, bring personae that are just too familiar/conventional to spark a high level of viewer involvement. In any event, “Good People” ends up in the kind of no-man’s-land that no movie, least of all a genre picture, wants to be in: it’s engaging enough while one is watching it, but not distinctive enough to make it special, or, in this case, enthusiastically recommendable. 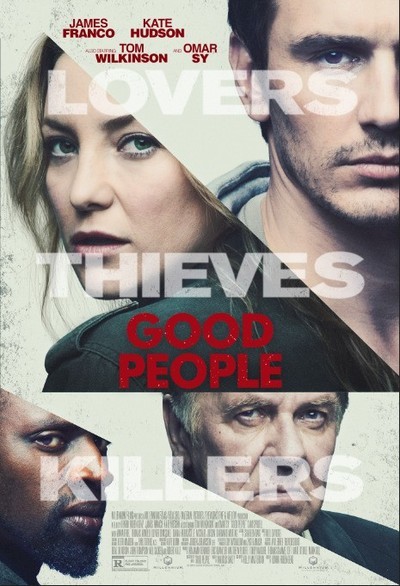