Written and directed by "Gattaca" filmmaker and "The Truman Show" screenwriter Andrew Niccol, "Good Kill" is an intelligent but not terribly effective drama. And its discussion of military ethics, especially with regard to what it means to be able to kill people without physical consequences, is promising, but it does not go far enough.

The hero is Thomas Egan, a former Air Force pilot who now operates ("flies" feels like the wrong word) armed drones. As you might imagine, the experience is a bit like playing a very supple and complex videogame, but with real consequences: when you press a button and fire a missile, people actually die. The use of armed drones in war and extrajudicial assassinations has found its way into many a high-tech movie thriller and television series. It's a key part of Showtime's "Homeland," which often depicts CIA officers debating whether to fire missiles at terrorists, suspected terrorists, people who might know suspected terrorists, and for that matter, pretty much anyone deemed a threat to the security of the United States (whatever higher-ups have decided that means).

The murkiness behind all that reasoning is at the center of "Good Kill." Egan is experienced at killing people from a distance, be they enemy pilots or people in structures on the ground, but drones represent an incremental moral and philosophical widening of the gulf between the people who order violence committed, the people who commit it, and the people it affects. Egan gets lost in the gulf, untethered from any possibility of moral reckoning, and that's his main problem. The best parts of the film evoke the almost Kafka-esque moral confusion of Steven Spielberg's "Munich," where a group of state-sponsored avengers got a place where they weren't entirely sure who they were being asked to murder or what the targets were supposed to be guilty of.

Egan lives in a Las Vegas suburb with his wife Molly (January Jones of "Mad Men"), drinks heavily to numb his guilt, and commutes to a nearby base, where he dons a headset, stares a viewscreens and virtually flies drones with a joystick, directing fire at targets picked by "Langley." That's the name of the city that houses CIA headquarters, but because it's represented by the distinctive voice of Peter Coyote, it becomes indistinguishable from the name of a character; this is a nifty way of personifying a faceless bureaucracy, though of course that neat trick underscores the maybe-irresolvable problems that prevent this movie from being as emotionally wrenching as you may want it to be. Drama tends to be most involving when you're watching individuals interact with each other directly. Egan's predicament has hints of Orwell and Kafka. Communication turns to mush in his ears and mind. The language and acronyms he hears every day are designed to make the ritual of killing a bunch of strangers from thousands of miles away feel as mundane as deciding to buy an office chair online with a mouse-click.

But is drone warfare really a vastly greater outrage, or ethical problem, than any other kind of state-sponsored violence? It might be, but while "Good Kill" seems to insist that it is, it never convincingly makes the case, which remains too strongly rooted in Egan's understandably fuzzy malaise. Egan's desire to get back into an actual cockpit (a request that his commanding officer, played by Bruce Greenwood, refuses to support) feels like a half-measure. It's the best he can do under the circumstances: he's not a hero of deep imagination, and he's also a career military man who can't imagine any other kind of life for himself.

But is it really substantially more moral to kill people from a jet flying over a battlefield than from an air-conditioned office in Nevada? The same arguments against the impersonality of killing were raised when machine-guns were invented over 150 years ago, and used in combat against enemies that Gatling gun operators could actually see, and who could at least shoot back. For that matter, a version of these problems get raised and argued about whenever there's a new evolutionary development in warfare that makes it possible for one person to kill many people from far away: the longbow, the cannon, artillery, aerial bombing, the list goes on.

Niccol gets into some of this, mainly in a few long monologues, but for the most part it remains at the periphery, which seems odd considering that he's deliberately made an "issue" picture here. I don't want to minimize the sense of concern or alarm expressed by people who have a problem with drone warfare.  I'm just saying that the film makes some intriguing opening arguments and then reiterates them for a couple of hours, rather than elaborating. 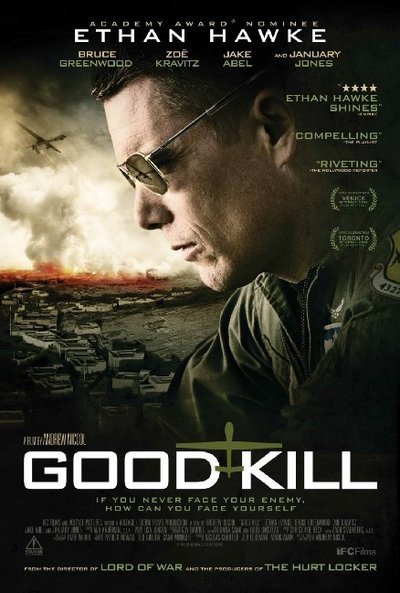 Rated R violent content including a rape, language, and some sexuality