A vivid yet languid ‘70s mood out of a John Cassavetes film, complete with a softly intoxicating score, welcomes you into the world of “Goldie” in its early moments. Then with a serene pace, writer/director Sam de Jong’s electric touches light up the screen with humanistic hues: we are in a colorful and energetic corner of the Bronx, following a young woman leading a life that stands in such stark contrast to all the vibrancy that surrounds her. Played by Instagram model Slick Woods in a stunning debut performance, she is the 18-year-old title character Goldie, holding on to the dream of becoming a famous dancer one day. While her youthful mind and soul keep her vision alive against all the odds, she pursues a lucky break in a rap video any which way that she can.

One of the vessels through which she keeps her goal in tact happens to be a plush, bright yellow fur coat—something that could be out of a hip magazine cover Goldie covets as much as Ellen Burstyn treasures an old red dress in Darren Aronofsky's “Requiem for a Dream.” But the trancelike, at times, feverish quality of “Goldie” is closer to Harmony Korine in spirit, and isn’t dark like the Aronofsky film, even though Goldie sees the coat as a sign of salvation much like Burstyn perceives the crimson garment as the symbolic end of her doom and gloom. In fact, however realistic and honest de Jong maintains his scrappy tale, he also can’t help but inject the story with generous doses of optimism while tracing Goldie as she hustles her way through one dead-end deal to the next, trying to get closer to the coat and maybe even fame. Through these brisk narrative beats, the filmmaker’s music background makes itself known at once. With the animations of Smith & Lee, the director paints the innocent viewpoint of Goldie onto the screen, making the vigorous, multicolored graphics an essential part of the kaleidoscopic experience.

But that doesn’t mean we don’t see the gradual erasure of the lead character’s intoxicating childlike wonder. Goldie’s days in the family shelter she lives at prove to be numbered, when her mother gets arrested and consequently, Goldie loses her connection to a steady supply of cash she used to steal from her mom’s drug-dealer boyfriend. Now unwittingly in charge of her two younger sisters while fighting to make ends meet, Goldie goes door to door, searching for the kind of life that doesn’t seem to exist for a down-on-her-luck Bronx teenager. A dysfunctional system threatening to pluck away her sisters and put them in the hands of child protective services only makes things harder.

Still, Goldie battles her way forward, often times with a dancer-ly spring in her step. Along the way, she crosses paths with an ex-teacher (Edwina Findley Dickerson). “You need a stable home, some structure and an adult in your life,” the educator wisely advises, hinting that the kids would be better off with authorities. Also in Goldie’s mix-tape are an abusive former lover and a well-meaning ex-con who can’t help her with anything permanent. So without much choice, Goldie eventually finds herself trapped in the illegal dealings of her mom’s ex, which she barely manages to get out of.

Throughout, de Jong both romanticizes the unique vigor of New York City (especially the Bronx), and seeps the viewer into its harsh realities as everything grows more impossible for Goldie by the minute. Still, the filmmaker seems to have a lot more to say about lovable Goldie’s inner, naive world than her perpetual lack of privilege in an uncharitable city as unfair as they come. But that bug is somehow the main charm of “Goldie.” Despite the heartbreaking notes of its ending, this vibrant film makes you want to believe that things will somehow and magically turn out OK for her, simply because she deserves it. 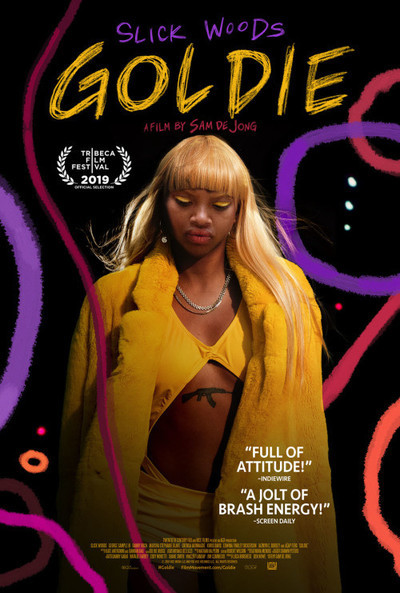