"Gold Diggers: The Secret of Bear Mountain" may not have been adapted from an old Nancy Drew mystery, but that's how it plays, with a touch of the Hardy Boys. Even the title seems inspired by those old Grossett & Dunlap books that glued me to the couch on rainy Saturdays. Writing about them now, I can remember the illustrations, which invariably showed a couple of wide-eyed kids holding a flashlight that illuminated, in its powerful beam, a savage bear, a cornered bank robber or a treasure chest.

The young heroes of "Gold Diggers" are Beth (Christina Ricci), who has just arrived in town with her mother, and Jody (Anna Chlumsky), a tomboy who quickly becomes her best friend. (So strong is the memory of the language of those old books that I almost wrote "chum" instead of "friend.") These girls, both in budding adolescence, are more modern than Nancy Drew, however. Beth, a city girl, is none too happy to live in a small town ("Where's the mall?" she asks, before discovering that the TV set can only pick up two channels.) Jody is a reader as well as a tomboy, and after beating up a local bully and scaring Beth by telling her a lizard is crawling up her leg, she shares her favorite book: Bear Mountain and the Legend of Molly Morgan.

The legend has it that a treasure in gold was hidden in a cave inside Bear Mountain by Molly Morgan, a pioneer woman from Gold Rush days. Jody believes the girls should spend their summer looking for it, and Beth goes along with that notion. Soon they're exploring the local waterways and approaching Bear Mountain in an old boat that Jody has managed to possess and repair, in the tradition of the Hardy Boys and their motorcycles.

The movie slips back and forth between teenage adventure nostalgia and modern touches. Consider, for example, that both girls come from households without fathers. Beth's mom (Polly Draper) wants them to try living in the little town where she grew up and has inherited an aunt's house. Jody's mom (Diana Scarwid) has a boyfriend (David Keith) who seems like a really nice guy, but gets drunk, beats her up, and eventually kidnaps Jody in a bid to find the gold. You know times they are a-changin' when the MPAA's warning on a PG-rated movie includes the words "for mild language and thematic elements, including a child's exposure to domestic abuse." Luckily, there is a stalwart local sheriff (Brian Kerwin), who knew Beth's mother when they were kids together, and who believes Beth when she says they must leave for Bear Mountain immediately because the bad guy no doubt has Jody tied up inside and is digging for the gold. This leads to a land-air-water rescue mission with helicopters, frogmen, inflatable rafts and, of course, lots and lots of flashlights, in whose powerful beams we see treasure chests, etc., not to mention a woman who is probably not the ghost of Molly Morgan, although it is otherwise hard to account for her presence on the scene.

The picture depends on Christina Ricci and Anna Chlumsky for its appeal, and they make it genuinely appealing. Chlumsky in particular has been a favorite of mine since "My Girl" (1991), and she is growing up into a likable, all-American girl. Ricci is fixed in my mind as the very peculiar little girl in "The Addams Family," but I pushed those associations aside and enjoyed this more wholesome performance.

The movie itself is not a great work. Neither were the Hardy Boys books, although for several years their author, Franklin W.

Dixon, was my favorite writer, ranking just above Mark Twain, who was almost as good. I have a rule that I never, or rarely, write things like "not my cup of tea, but sure to be enjoyed by young girls." I am going to break that rule, because foolish consistency, as we know, is the hobgoblin of little minds.

"Gold Diggers" is not my cup of tea, but it is sure to be enjoyed by younger audiences, and although I don't think it will hold the attention of adults, I do not require adults and children to be alike in all things.

After all, I can no longer jump into the air and click my heels together three times before coming back down again. That was the favorite trick of Buddy, the hero of all the Buddy books, also created by that fertile genius, Franklin W. Dixon. The fact is, I never could click my heels together three times, but it says something for Mr. Dixon that I spent a lot of time trying. 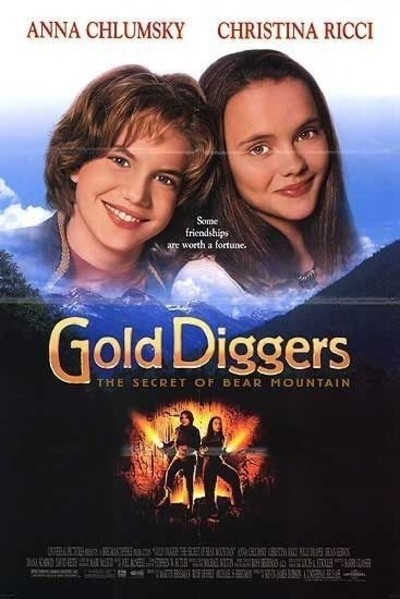 Rated PG For Mild Language and Thematic Elements, Including A Child's Exposure To Domestic Abuse