It still hasn’t quite completely registered that our remaining Philip Seymour Hoffman performances are finite. And just as listening to "Nevermind" changed after Kurt Cobain’s passing or "The Dark Knight" took on new resonance after losing Heath Ledger, every performance already seen and the few remaining to be released feels more poignant. Even in a disappointing film like John Slattery’s "God’s Pocket," Hoffman makes unique, personal, realistic choices that other actors wouldn’t have considered. An already somber drama like this adaptation of a Pete Dexter novel feels even more melancholy knowing it’s one of the last characters that we’ll ever get from Hoffman. Sadly, it won’t be one he’s remembered for as the star of "Mad Men" misfires with a tonally inconsistent, deadly dull slice of working class life that may have a great cast but remains forgettable in every way its star so often refused to be.

Slattery’s directorial debut opens with a bit of overwritten columnist prose from writer Richard Shellburn (Richard Jenkins) about the "simple men" who live in God’s Pocket, a blue-collar community of hard drinkers, gambling addicts, tough workers, and the women who love them. "Whatever they are is what they are." One of many problems with the script of "God’s Pocket" by Slattery and Alex Metcalf is that it presents an alcoholic, hack writer in Shellburn but feels like it let the character write the dialogue. This is one of those odd pieces of work in which characters will say things like "Nothing works against you like time. Time’s a bitch." Or "It’s getting cold." "Yeah, it’s a cold world." I don’t need to tell you that no one speaks like this in the real world and it’s the kind of overwritten dialogue that may work fine on the page in Dexter’s novel but feels false on the big screen, especially in a project that needed either stark realism or the kind of black comedy approach that the Coens bring to their films—not the gray area in between. And a flat, beige color palette shot with dull, lifeless cinematography from the often-great Lance Acord doesn't help.

Hoffman plays Mickey Scarpato, another outsider like Shellburn who just doesn’t get the people of God’s Pocket, maaaaan. But he’s deep in the community, married to Jeanie (Christina Hendricks) and friends with a local named Bird (John Turturro). Jeanie’s son Leon (Caleb Landry Jones) is a typical young tough guy who works on a construction site and mouths off to the wrong guy, who cracks him in the back of the head, killing him. The construction workers cover up the manslaughter, disguising it as an accident but Jeanie suspects something is off about her son’s death. While she’s encouraging people like Shellburn to get to the bottom of the mystery, Mickey is trying to scrape together the funds to pay for Leon’s funeral to the slimy Smilin’ Jack Moran (Eddie Marsan). Bird owes Mickey money but he owes more dangerous guys like Sal (Domenick Lombardozzi) too. Betting on horses, drinking the night away across the street from your house, dealing with gossip—it’s just life in God’s Pocket.

And life in God’s Pocket is dull. As hard as it may be to believe with a cast of actors who almost always bring something interesting to their work (and the quality Slattery has delivered not only in front of but behind the camera on his AMC hit), this is a flat, boring affair. Halfway through, the narrative takes a twisted turn and one realizes that Slattery never figured out the tone. Is this supposed to be black comedy? Are we supposed to identify with Mickey? Pity him? Hope he escapes? And what about Shellburn, the writer who thinks he knows all about God’s Pocket but really doesn’t at all? When he meets and falls for Jeanie, it’s entirely unclear how we’re supposed to respond. If one takes this as a "slice of gritty life" story, the dialogue isn’t genuine and the plotting isn’t interesting enough to carry it.

Only a few character beats save "God’s Pocket" from total disaster. The friendship with Turturro has some lived-in energy early in the film. Marsan has always played slimy with ease. Hendricks proves she deserves a better role. And then there’s Hoffman, again finding ways through the cliché to occasionally tap into something genuine, whether it’s just in a world-weary shrug or a paunch that hints at a life lived hard and with more than its fair share of sadness. 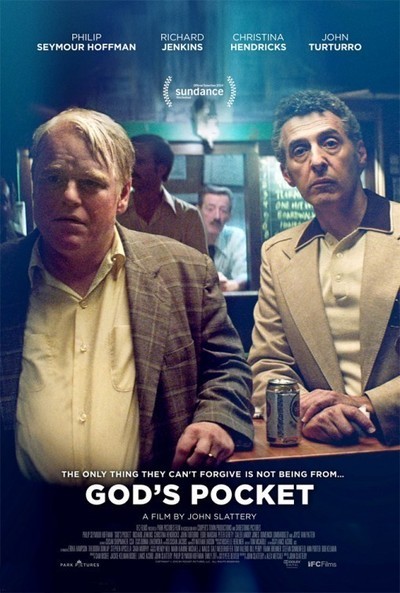 Rated R for violence, language throughout and sexual content