I have two things to say to anyone who’s tempted to walk out of Michel Hazanavicius’ “Godard Mon Amour” before the halfway mark. First: I understand. I might have done the same had I not been reviewing. Second: thankfully, the film does get better in its second half. Not a lot better, but enough to justify one’s continuing attention.

Hazanavicius, who simultaneously parodied and paid homage to the silent cinema in “The Artist” (a title that might have worked for this film too), here takes on an altogether trickier slice of movie history: the moment when innovative cinema and radical politics collided on the streets of Paris and at the Cannes Film Festival before, during and after the riots and strikes of May 1968. The film dramatizes this period by focusing on the relationship between Jean-Luc Godard (Louis Garrel), the French New Wave’s most lionized auteur, and his second wife and leading lady Anne Wiazemsky (Stacy Martin).

When the film opens, Godard has passed the apex of his early career—which included films that his fans here wish he’d return to, such as “Breathless” and “Contempt”—and veered into more overtly political filmmaking by directing “La Chinoise,” featuring Wiazemsky. He is in his late 30s, she in her late teens, an age difference that Hazanvicius understandably finds significant. His Godard, existing in a moment when student revolutionaries have claimed center stage, is floundering as he attempts to stay current and ahead of the curve even though he no longer has the youth that now automatically conveys legitimacy and authority.

Though its basic premise has a pleasing audacity—that some people view the subject as too sacrosanct for screen treatment is exactly why it should be treated—“Godard Mon Amour” has obvious problems from the get-go. One is that its stars aren’t very well-suited to their roles. Fitted out with Godard’s trademark glasses (which keep getting broken: a running joke) and a bad half-bald wig, Garrel settles for a superficial impression that captures little of Godard’s specific energy and intelligence. And Martin, for some unknown reason, is given a bob that makes her look more like Anna Karina, Godard’s first wife.

But a greater problem is that Hazanavicius, perhaps hoping for an international audience, seems wary of delving into the French context of the events he shows. For example, some of the early protests we see may be meant to evoke the reaction to the government’s dismissal of French Cinematheque head Henri Langlois, actions involving the film community in February that did indeed prefigure the uprisings of May. Is all mention of this crucial groundswell left out since non-French viewers are presumed not to know of Langlois? In any case, what we get instead are too many scenes of Jean-Luc and Anne hanging out in their chic apartment (decorated with posters of Mao and Malcolm X, natch), attending tedious cocktail parties and university political gatherings (in one, Godard demonstrates his radicalism by shouting, “Jews are the new Nazis!”) and eventually rioting and throwing paving stones at cops during the street clashes of May.

The film’s production design and style make constant cheeky references to Godard films: there are tracking shots galore and the primary-color interiors mimic those in films such as “A Married Woman” and “Two or Three Things I Know About Her.” But these are very superficial glosses, with little to say about the sources they ape.

The same is true of the film’s spotty account of Godard’s career in this era. We do get to see his evolving friendship with a dweebish Jean-Pierre Gorin and the formation of the (cough) Dziga-Vertov Group, as well as his break with Bernardo Bertolucci over the latter’s allegedly insufficient radicalism. Yet while there are glimpses of the making of inconsequential films including “Pravda” and “Wind from the East,” not a word is said of “Weekend,” arguably Godard’s most important and innovative film of this period. As for Wiazemsky, Hazanavicius’ script derives from her biography, a text that suggests a much more interesting woman than the 19-year-old depicted here. In "Godard Mon Amour," she's mainly used for her allure in several nude scenes and her part in an all-too-conventional relationship melodrama.

As noted, the film becomes less tiresome in its second half, when the scene shifts to the Cote d’Azur and the Cannes Film Festival, which is shut down by Godard, Truffaut (who is never seen) and fellow auteurs in support of the Paris rioters. Here the whole enterprise seems to benefit from the injection of refreshing Mediterranean air and light, a la “Contempt” and “Pierrot le Fou.” This episode also yields the film’s single best scene.

It’s night and Godard and Anne are motoring back to Paris with four friends. One is a filmmaker who complains at length about the harm that he thinks his film has suffered by the closure of Cannes. Godard, understandably annoyed at his kvetching, eventually launches into a tirade saying that the old cinema needs to be destroyed, including his own works and those by such revered directors as Renoir, Lang and Ford. The only movies that should be saved are “subversive” comedies by the likes of the Marx Brothers and (of course) Jerry Lewis.

This does capture something about the dotty cine-polemics of the time, and about Godard’s prickly, arrogant personality. By all accounts, he could be and often was a complete jerk even to close friends. (You get a glimpse of this as an ongoing condition in the recent doc “Faces Places” by his old pal Agnes Varda.) But even that failing doesn’t impugn his artistry as much as it does something that reached a peak in this period: the cold, deluded, misanthropic intellectuality behind his embrace of the politics of Mao Zedong, one of the past century’s worst mass murderers.

Where Hazanavicius might have mounted a fierce cinematic broadside, or conversely a sympathetic defense of Godard’s aberrations in an unhinged time, he has taken a middle course and ended up with a film that, despite scattered amusements and insights, is fundamentally unsatisfying. It's something Godard’s never were: mediocre. 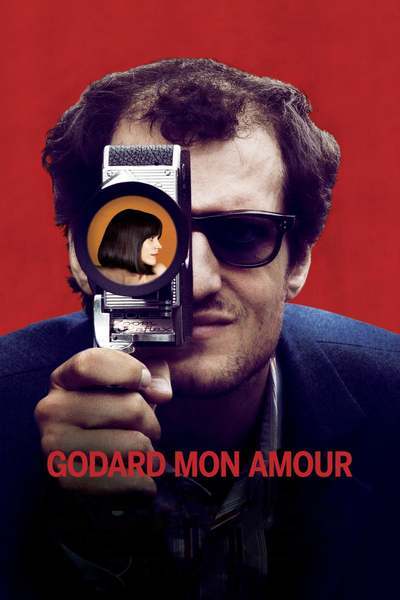 Writer (adapted from the novel "Un an après" by)