“I want to teach you how to hold the camera.”

That’s what Steve Gleason, the former safety for the New Orleans Saints, tells his wife Michel Varisco in an early scene from “Gleason,” a documentary about his struggle with ALS (Amyotrophic lateral sclerosis), formerly known as Lou Gehrig’s disease. He’s pointing the camera at Michel at first, and then he gives it over to her, and suddenly he’s looking us right in the eye. “A good filmer asks good questions to get really good material,” Steve tells Michel. And wow, does “Gleason” make good on that bit of advice.

This marvelous documentary, directed by J. Clay Tweel, takes all of its cues from that early scene. Steve Gleason retired from the National Football league after eight seasons and has been struggling with ALS since, trying to raise public awareness of the disease and agitate for a cure with help from Team Gleason, a nonprofit group founded by Michel. The whole movie is as unaffected and direct as a documentary can be. Nothing is off-limits here: moments of doubt and fear, disgust at failures of the body, the challenges that a debilitating illness poses to marriage and parenting (Gleason’s son, River, was born shortly after his diagnosis, and figures heavily in the story).

Like “Life Itself,” about this site’s founder, “Gleason” intertwines biographical flashbacks (including Steve's pivotal blocked punt during the Saints’ first post-Hurricane Katrina game, which led the city to erect a statue in his honor) and present-day scenes of its subject enduring humiliating medical treatments. He gets through it all with patience, humor, and the support of a loving partner. One of the comic high points, incredibly, is a scene where a nurse arrives to give Steve an enema.

The movie takes us inside Steve’s support network, which they refer to as their “Badass Unit,” and expands outward from the physical to encompass the emotional and spiritual reckoning that families encounter when one of their members is stricken. A key section charts Steve’s thorny relationship to his father, Mike, who concedes that his son was raised in “a pretty dysfunctional household” but appears to have been forgiven now (to his astonishment) because of the love he shows for his son during the toughest stretch of his life. Mike makes his son's survival job one, leaving no stone unturned (including a flirtation with faith healing) as he considers the possibility that he might outlive his child. Meanwhile, Michel serves as the anchor not just for Steve's treatment but for the audience's journey, honestly confessing her doubts and fears even as she soldiers on.

The relationship between fathers and sons is the marrow of this emotional movie, expressed not just in Steve’s relationship with his own father and son, but in an interview with Pearl Jam frontman Eddie Vedder by Steve (a talented, self-taught filmmaker himself) about his own troubled relationship with his dad. This is a tearjerker of a film but also a joyous one. 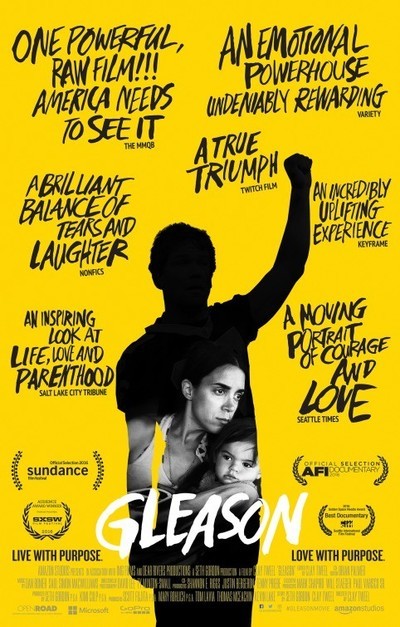 Rivers Gleason as Himself

Michel Gleason as Herself

Steve Gleason as Himself